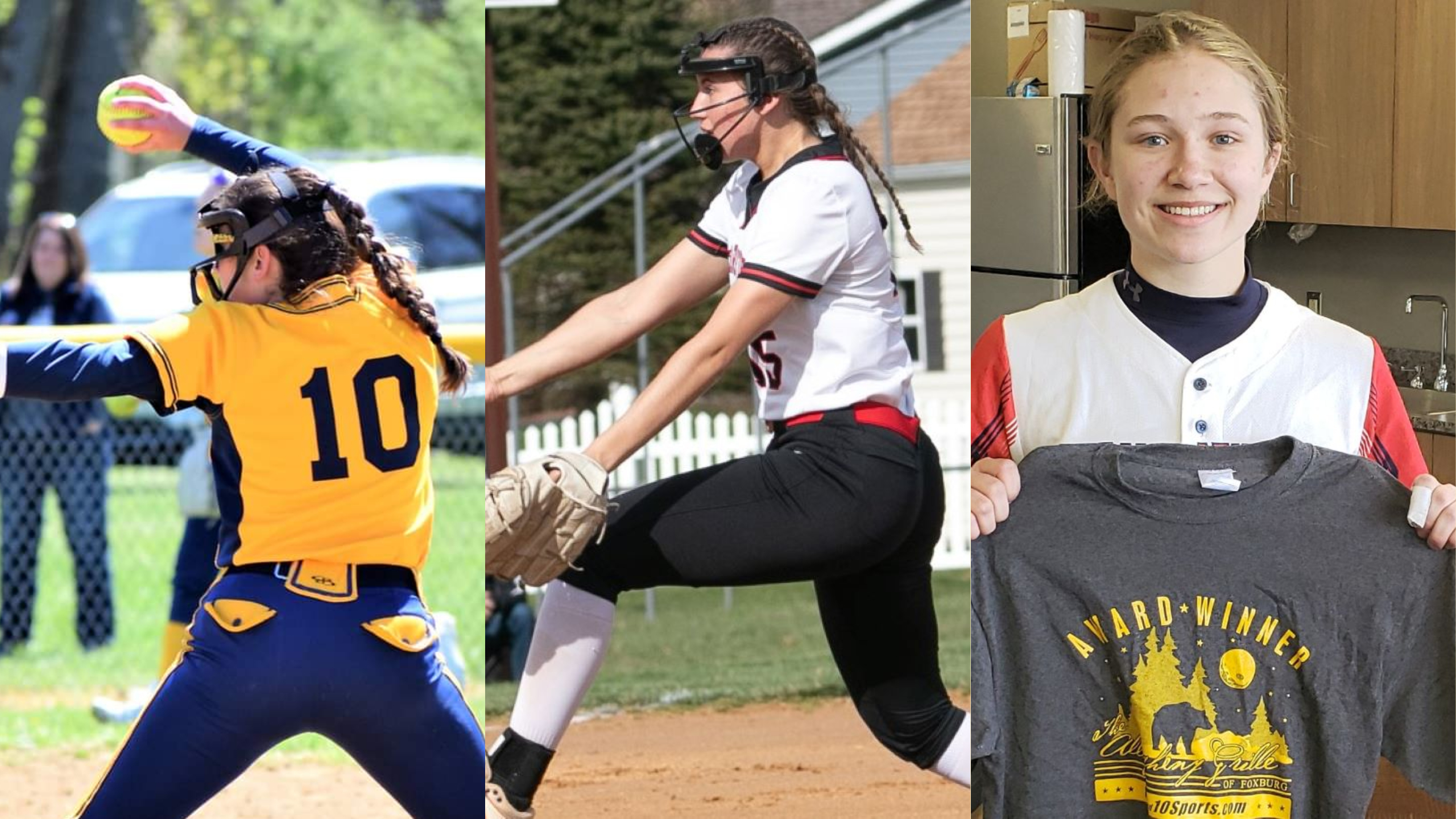 Three District 9 and District 10 softball teams are looking for trips to the PIAA softball title games with one guaranteed a berth.

DCC was the last District 9 team to make the PIAA championship game in softball doing so in 2019 when it finished as runner-up in 1A. A D10 team hasn’t made the title game since 2013 when Fort Leboeuf was runner-up in Class 3A.

Here is a quick look at both games

CLASS 1A: (9-1) DUBOIS CENTRAL CATHOLIC (21-2) VS. (10-1) SAEGERTOWN (16-4)
When: 4 p.m., Monday, June 13, at Westminster College, New Wilmington
How to Watch/Listen: D9and10Sports.com will be providing a video broadcast of the game
Winner Gets: Winner of 4-1 Mongtomery vs. 6-2 Glendale (2 p.m. at Milesburg Little League Complex) game in the PIAA title game at 11 a.m. Thursday, June 16, at Beard Field at Nittany Lion Softball Park on the campus of Penn State University in University Park.
About DCC: The Lady Cardinals are in the semifinals for the fifth time in the past six seasons having lost to West Greene in 2016, 2017, and 2021, and having beaten West Greene in 2019 before finishing second in Class 1A. All five appearances have been in Class 1A. DCC played West Greene for the fifth time in six seasons in the quarterfinals coming away with an 8-2 win. That was the sixth consecutive win for the Lady Cardinals, whose last loss was a 13-1 in five innings defeat to rival DuBois, a 5A school, May 14 in the City Classic. The only other loss for DCC was a 9-2 setback to 4A St. Marys April 28. The Lady Cardinals are 20-0 vs. Class 1A and Class 2A schools this season. DCC beat Elk County Catholic, 4-3, in the D9 semifinals, Forest Area 10-0, in five innings in the D9 title game, and then topped Greensburg Central Catholic, 4-2, in the opening round of the PIAA playoffs.
About Saegertown: The Panthers are looking for their first-ever trip to the PIAA title game and are making their first-ever appearance in the semifinals. Saegertown beat Cochranton, 12-8, to win the D10 title then topped Elk County Catholic, 6-0, in the opening round of the PIAA tournament before beating WPIAL champion Union-New Castle, 1-0, in eight innings in the second round. The Panthers have won five in a row since a 9-0 loss to Union City May 17.
DCC Key Players to Watch: Perhaps the story of the postseason is DCC’s Melia Mitscavich. The DCC pitcher had thrown all of nine innings in three appearances before getting the call in the D9 semifinals vs. ECC. She has now started all four postseason games for the Lady Cardinals tossing 16 innings while going 2-0 and allowing four earned runs. On the season, she is 4-0 with a 1.50 ERA. In 28 innings of work, she has 30 strikeouts while walking eight. The starter for most of the season, Morgan Tyler, has taken a piggyback role with Mistscavich in the postseason pitching in all but the D9 title game. On the year, Tyler is 12-2 with a 3.06 ERA. In 80 innings of work, she has 82 strikeouts and 19 walks. It’s the offensive side of the ball that makes DCC hum. The Lady Cardinals are hitting .447 on the year while averaging 11.7 runs per game. Emma Suplizio leads the way at .528 with two home runs, seven doubles, a triple, 31 runs scored, and a team-leading 36 RBIs. Freshman Kali Franklin checks in at .513 with 11 doubles, three triples, 27 RBIs, and a team-best 37 runs scored. Kayley Risser comes in hitting .457 with a homer, six doubles, five triples, and 26 RBIs, Jessy Frank and Lauren Davidson are both hitting .453 with Frank adding 21 RBIs and Davidson 16, and Madi Hoyt is hitting .452 with 15 RBIs.
Saegertown Key Players to Watch: The Panthers are winning thanks to the arm of sophomore Mikaila Obenrader. Obenrader has thrown five no-hitters and a perfect game this season, including an eight-inning no-no in the win over Union-New Castle. She is 16-4 on the season with a 1.12 ERA. In 119 innings of work, she has struck out 235 and walked 40. That includes 41 strikeouts and just eight walks in 22 innings of postseason work. She hasn’t allowed a run in the PIAA playoffs and has given up two hits and six walks while striking out 26 in 15 innings. Obenrader also is a key contributor on offense hitting .390 with five home runs, eight doubles, and 27 RBIs. Freshman Rylie Braymer is the team’s leading hitter at .481 with a team-best 26 runs scored to go with 14 RBIs. The offensive hero of the quarterfinal win, Rhiannon Paris, is hitting .415 with five doubles and a team-best 31 RBIs, Hailee Gregor is hitting .449 with 14 RBIs, Alyssa Arblaster is hitting .348 with 25 runs scored and seven RBIs, and Maggie Triola is hitting .323.

CLASS 4A: (9-1) CLEARFIELD (20-3) VS. (7-1) BEAVER (21-0)
When:2 p.m., Monday, June 13, at St. Francis University, Loretto
How to Watch/Listen: Passport Radio will be broadcasting the game
Winner Gets: Winner of the 1-1 Villa Joseph Maria vs. 2-1 Tunkhannock (4 p.m. at Patriots Park in Allentown) game at 1:30 p.m. Friday, June 17, at Beard Field at Nittany Lion Softball Park on the campus of Penn State in University Park.
About Clearfield: The Lady Bison are in a PIAA semifinal for the second time in the past three seasons having lost 1-0 to Bald Eagle Area in 2019 in 3A (there was no season in 2020). Clearfield is looking for its first-ever trip to the PIAA title game. The Lady Bison have won four in a row since a 1-0 loss to Central Mountain May 17. That includes a 4-1 win over St. Marys in the D9 title game, a 4-3 walk-off win over Franklin in the first round of the PIAA Tournament, and a 4-0 win over Hamburg in the quarterfinals.
Beaver: The Bobcats are the defending PIAA champion in 4A and have won 42 consecutive games since the start of last season with their last loss coming during the WPIAL playoffs in 2019. A year ago, they beat Tunkhannock, 5-4, in nine innings for the PIAA title. In the playoffs this season, Beaver beat Freeport, 10-0, in five innings in the WPIAL quarterfinals, Montour, 6-1, in the WPIAL semifinals, and Elizabeth Forward. 6-0, in the WPIAL championship game before knocking off Fleetwood, 3-2, in the opening round of the PIAA Tournament, and Burrell, 3-0, in the quarterfinals.
Clearfield Key Players to Watch: The Lady Bison rely on senior pitcher Emma Hipps to lead the way. Hipps, a Clarion University recruit, is 19-2 on the year with a 1.05 ERA. In 140 ⅔ innings, she has struck out 267 and walked 26. In her career, Hipps is 45-17 with a 1.50 ERA. In 416 ⅓ career innings, she has struck out 742 while walking 81. Hipps is also the offensive leader for Clearfield hitting .466 with eight home runs, eight doubles, two triples, and 30 RBIs. She is Clearfield’s all-time home run leader with 24. Ruby Singleton, Lauren Ressler, and Oliva Bender are also all hitting over .400. Singleton checks in at .464 with 10 doubles, two home runs, and 12 RBIs, Ressler is batting .410 with nine doubles, three home runs, and two triples while driving in 30 runs, and Bender is hitting .406 with a team-leading nine home runs to go with 23 RBIs.
Beaver Key Players to Watch: The Bobcats have one of the top pitchers in the Commonwealth in Payton List. The Virginia Tech recruit has a minuscule 0.52 ERA having allowed just eight earned runs (14 total) in 135 ⅓ innings of work. She has struck out 275 and walked 42 and is coming off a career-high 20 strikeouts in the win over Burrell. List is also the best hitter for Beaver and is hitting .635 with 11 home runs, 12 doubles, a triple, 42 runs scored, and 28 RBIs. Sheridan Springman is hitting .443 with six doubles and 18 RBIs, Hanna Crowe checks in at .33 with eight doubles, a home run, a triple, and 20 RBIs, Kayla Cornell is hitting .338 with 17 RBIs, and freshman Taylor Young is hitting .354 with 15 RBIs.

Punxsutawney, DCC Baseball Teams Looking for Trip to PIAA Title Games Powered by North Washington Rodeo
June 13, 2022 D9/10 PIAA Baseball, Softball Schedule Powered by North Washington Rodeo
This website or its third-party tools process personal data.In case of sale of your personal information, you may opt out by using the link Do not sell my personal information.
×
Manage consent