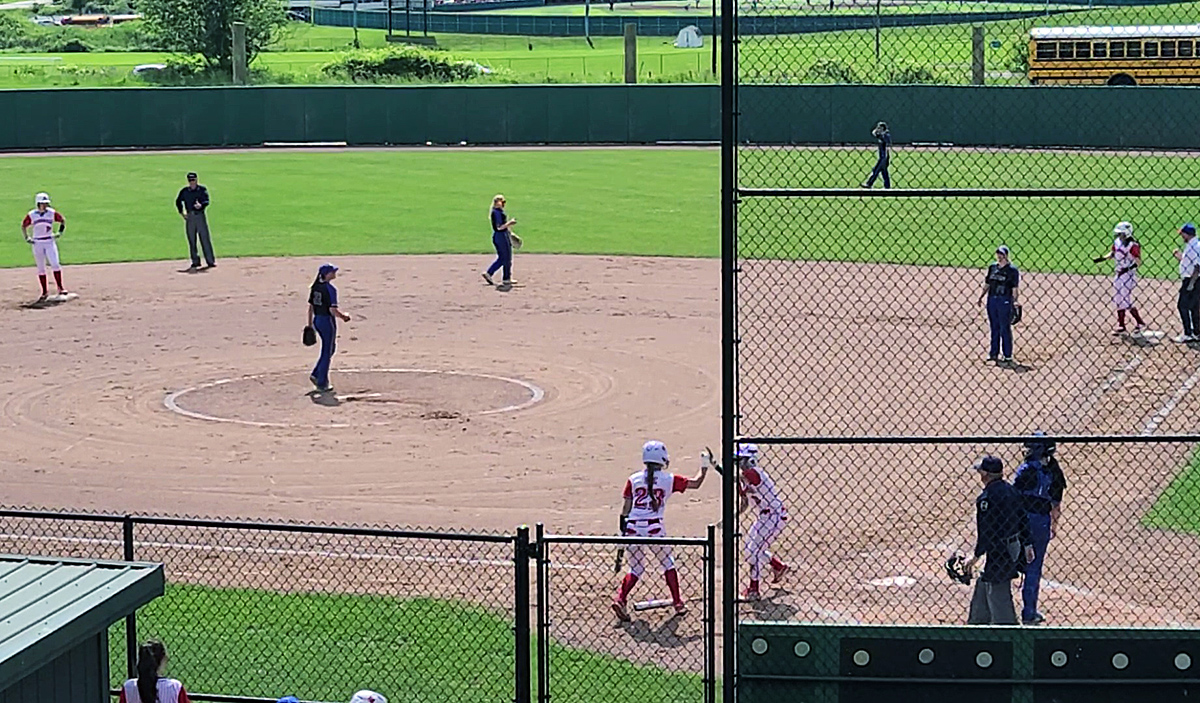 SLIPPERY ROCK, Pa. – DuBois Central Catholic coach George Heigel has been preaching about taking a more aggressive approach at the plate to his players.

The Lady Cardinals took that message to heart Thursday as they pounded out 15 hits in an 8-2 win over West Greene in their PIAA Class 1A quarterfinal game at Slippery Rock University.

“They get in this mode where they want to take the first strike,” Heigel said. “We were more aggressive with our at-bats today. I think that was the difference.”

That aggressive approach paid big dividends as the Lady Cardinals scored six runs in the fourth to break the game open.

“It feels great,” DCC catcher Jessy Frank said about beating West Greene. “They’ve been our rival for a few years, so we really wanted that.”

Lauren Davidson singled to left and advanced to second on an error. Melia Mitskavitch followed with a walk to put runners on first and second. Morgan Tyler grounded into a fielder’s choice as Pioneers shortstop Katie Lampe fielded the ball and stepped on second to get Marina Hanes (courtesy running for Mitskavich). Lampe tried to turn the double play but her throw was off the mark allowing Tyler to reach safely and Davidson to score.

Kali Franklin followed with a double, then Emma Suplizio hit a blistering grounder to second that Taylor Karvan, who had been anticipating a sac bunt, could not handle on the hop. Tyler and Franklin scored on the play to push the Lady Cardinals’ lead to 5-0.

Pioneers with 3 errors this inning have allowed Cardinals to plate 3 so far. 1 out, top 3 pic.twitter.com/xtxaiANdWZ

Kayley Risser doubled to put runners at second and third, and Madison Hoyt reached on an infield single to load the bases. One out later, Frank roped a bases-clearing double to center to give DCC an 8-0 lead.

Jesse Frank adds to the total with a 3-run double. It’s 8-0 DCC and West Greene with a pitching change. 2 out, Top 4 pic.twitter.com/3ZJuVnd19V

“The first two at-bats, I got a lot of pitches inside,” Frank said. “The third at-bat I got a pitch outside, and I like outside, so I just tried to go with the pitch.”

DCC wasted little time getting the offense going. Franklin reached, and advanced to second, on an error to start the game and Suplizio followed with a single to bring in Franklin and give DCC a 1-0 lead.

Suplizio with an RBI single gets DCC on the board. They lead West Greene, 1-0 heading Bot 1 pic.twitter.com/TXUvdCx7Md

With one out in the second, Davidson, Mitskavich, and Tyler hit consecutive singles to load the bases. One out later, Suplizio drew a walk to push the lead to 2-0.

West Greene scored both of its runs, and four of its 11 hits, with a 2-out rally in the fifth. Lampe started the rally with a single, then came home on London Whipkey’s double to left. Kiley Meek singled to put runners on the corners and Whipkey came around on BreAnn Jackson’s RBI single to center.

Just as it appeared the Pioneers had figured out the timing on Mitskavitch’s pitches, following a leadoff double to Lexi Six in the sixth, the Lady Cardinals brought in Tyler to close out the game. Tyler set down the next three batters in order with a ground out sandwiched between two strikeouts.

“The plan was all along to have Tyler come in and be our closer,” Heigel said.

West Greene got back-to-back singles from Lampe and Whipkey to start the seventh. Tyler got Meek to line out to center and struck out Jackson for the second out. Olivia Kiger hit a grounder to short, but runner interference ended the game as Lampe collided with Hoyt attempting to make a play on the ball.

Lampe and Whipkey each had two hits for West Greene. Whipkey and Jackson each drove in a run.

“I would guess that’s probably the first time that that Meek’s ever got hit out of the game,” Heigel said. “So she’s a good pitcher. And so we took the next step.”

Suplizio had three hits, including a double, and four RBIs. Tyler had three hits and scored a run. Savannah Morelli, Frank, and Davidson each had two hits. Frank drove in three, Davidson scored twice, and Morelli scored once.

Mitskavich got the win allowing two earned runs on nine hits with no walks and a strikeout in five innings. Tyler threw two scoreless innings giving up two hits and striking out three.

“West Greene has got a great program, Bill Simmons does a nice really nice job with them,” Heigel said.

This year, the Lady Cardinals will face District 10 champion Saegertown, a 1-0 winner over Union (New Castle) in eight innings, in the semifinals on Monday at a time and location to be announced.

Punxsy BB Rallies Past Franklin in Thriller to Reach PIAA 3A Semis; Redbank Valley, Fairview Fall Powered by North Washington Rodeo
DCC Ace Anderson Shutdown Saegertown; C-L Plays to Win but Comes up Short Powered by North Washington Rodeo
This website or its third-party tools process personal data.In case of sale of your personal information, you may opt out by using the link Do not sell my personal information.
×
Manage consent