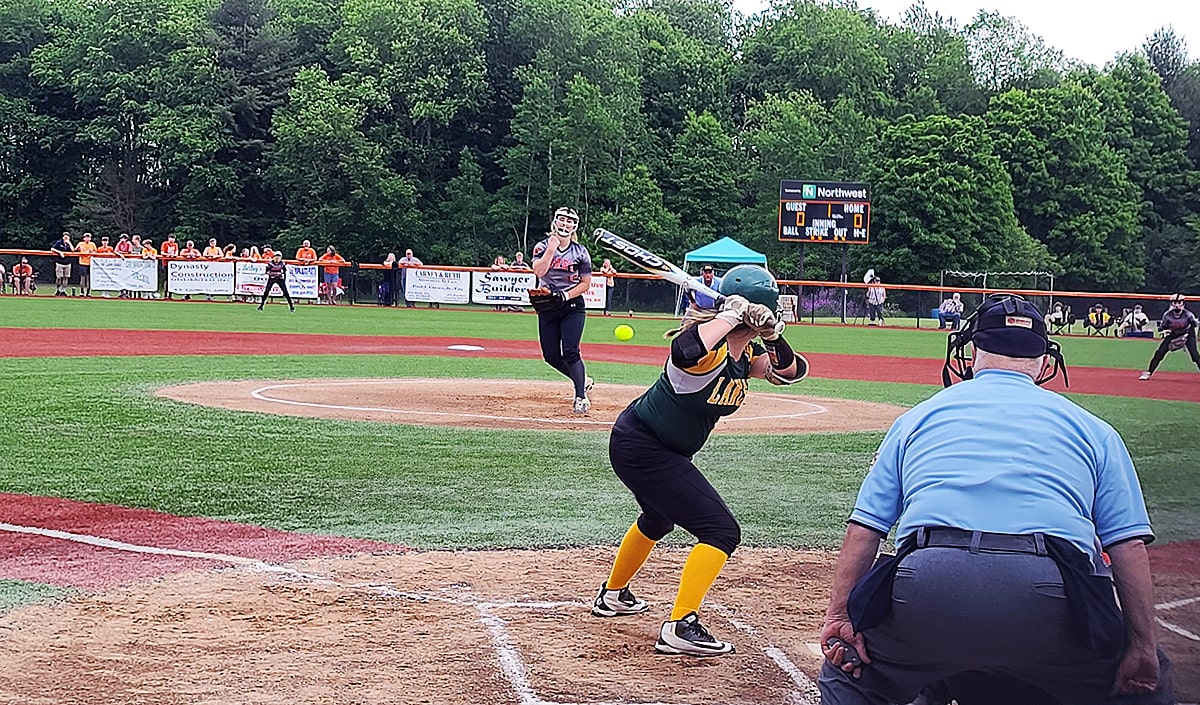 Corry's Haylee Dyne throws a pitch in the first inning of a PIAA Class 3A first round game against Deer Lakes. Photo by Brian Hagberg.

MEADVILLE, Pa. – A 15-strikeout effort by Mikaila Obenrader and a four-run first inning by Saegertown helped the D10 champion Saegertown beat D9 runner-up Elk County Catholic, 6-0, in the opening round of the PIAA Class 1A playoffs Monday at Allegheny College.

A single to right by Rhiannon Paris scored Alyssa Arblaster, who led off the inning with a single, to make it 1-0 before a double steal resulted in a pair of runs when the throw by catcher Caitlyn Vollmer went into centerfield. A double by Hailee Gregor made it 4-0.

The Panthers added a pair of runs in the third thanks to a pair of ECC errors to take a 6-0 lead.

Obenrader helped herself by going 3-for-3 at the plate while Arblaster was 2-for-4 with a run scored.

Emily Mourer had a double for ECC.

Saegertown will face WPIAL champion Union-New Castle, a 4-3 winner over Shade, on Thursday at a site/time to be announced.

DEER LAKES 5, CORRY 1
CORRY, Pa. – A 5-run sixth inning propelled Deer Lakes to a 5-1 win at Corry in their PIAA Class 3A first round game.

Trailing 1-0, and with only three hits through five innings, the Lancers’ offense exploded in the sixth. Lydia Guthrie hit a leadoff triple and Shayne Cerra followed with an RBI single to knot the game at 1-1.

One out later, Reese Hasley singled to put runners on first and second. Tia Germanich stepped in and launched the first pitch she saw over the left field fence to put Deer Lakes on top, 4-1. Delaine Kaiser’s RBI double later in the inning plated Anna Bukolich and capped the scoring.

Lancers have struck for 4 here in the 6th, three on this blast by Tia Germanich. pic.twitter.com/Sg9ZqTiUAG

Corry struck first with a run in the third. Alyssa Burlew and Reghan Trask drew consecutive walks to start the inning. Lexy Hasbrouck put down a sac bunt to move the runners to second and third, and a pitch hit Alli Goodwill to load the bases.

One out later, Dyne hit a ground ball that went off Kee’s glove and to Cerra at short. Cerra couldn’t field the ball cleanly and Burlew was able to score. Trask tried to come home, but Cerra threw to Germanich who applied the tag at the plate to end the inning.

End 3: Corry 1, Deer Lakes 0. Lancers nearly got out of a bases-loaded, 1-out jam, but couldn't cleanly field Dyne's grounder to short. pic.twitter.com/jF7dASNaVA

Germanich finished with two hits and three RBIs. Cerra had a hit, a run scored, and one driven in, and Kaiser had three hits, including a double.

Kee got the win allowing one run on four hits with five walks and 10 strikeouts.

Lexi Frisina had two of Corry’s four hits, including a double.

Deer Lakes will face Bald Eagle Area, a 4-1 winner over Southmoreland, in the quarterfinals on Thursday.

BURRELL 6, VILLA MARIA 0
ERIE – Burrell’s Katie Armstrong was nearly perfect in the circle as the Lady Bucs topped Villa Maria, 6-0, in their PIAA Class 4A first round matchup.

Armstrong gave up a single to Addie Biel in the third, threw a wild pitch on a third strike to Emily Dudenhoeffer in the fifth, and hit Annabella Cipalla in the sixth. Those were the only baserunners for the Victors, while Armstrong struck out the side three times on her way to 17 total strikeouts.

Burrell was efficient offensively, scoring six runs in each of the first, fourth, and seventh innings.

Pyper Ferres and Braelyn Jones each had two hits, including a double, and an RBI in the win. Ferres scored twice. Caroline Dynka had three hits and scored twice.

The loss not only ends the Victors’ season but also closes out the final season in Villa history as the school will merge with Cathedral Prep beginning next year.

Laurel scored five runs in the first and two more in the second to take a 7-3 lead, but the Raiders answered with four in the third to tie the game at 7-7.

Addie Deal hit a solo home run to break the tie. Eva Kuth hit an RBI single to add another run and Abbie Miles’ 3-run shot made it 12-7. The sixth run of the inning came on an error.

Bekah Valenti hit a 2-run double and Autumn Boyd followed with a 2-run homer to push the lead to 17-7.

Karns City Takes Advantage of Opportunities Better than Harbor Creek in PIAA 3A Softball Win Powered by North Washington Rodeo
Fairview BB Holds Off Hopewell; Saegertown Rolls Past Eden Christian; Cathedral Prep Falls to Laurel Highlands — Powered by North Washington Rodeo
This website or its third-party tools process personal data.In case of sale of your personal information, you may opt out by using the link Do not sell my personal information.
×
Manage consent