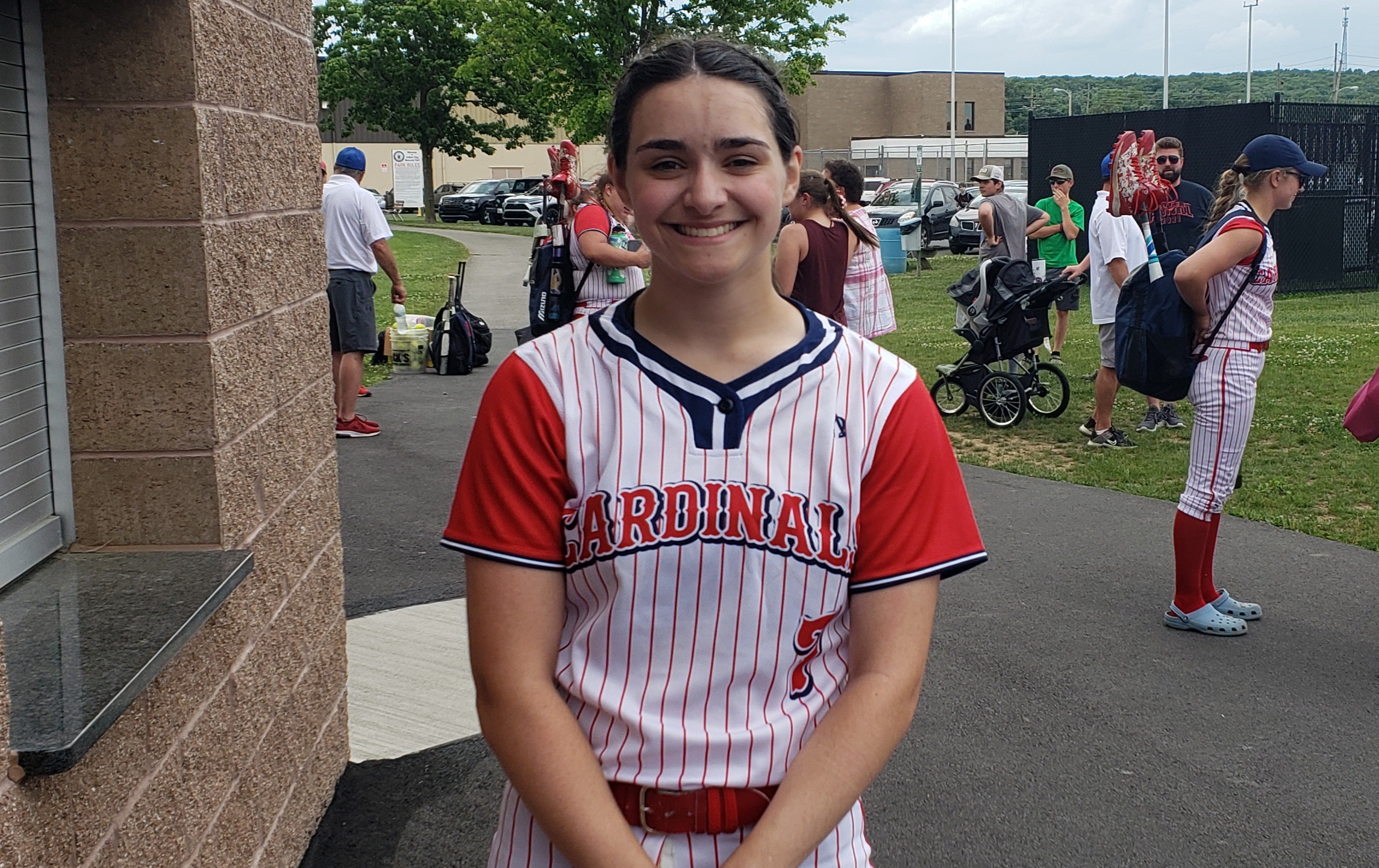 DUBOIS, Pa. – As she rounded first base, Emma Suplizio realized she had done something special.

Special enough to help DuBois Central Catholic erase a one-run deficit and pick up a 4-2 win over Greensburg Central Catholic in the opening round of the PIAA Class 1A softball playoffs Monday afternoon at Heindl Field in DuBois.

Suplizio’s three-run home run in the fifth inning erased a 2-1 deficit and helped the Lady Cardinals move into the quarterfinals for the sixth straight season since 2016 (there was no season in 2020).

“I was freaked out a little bit,” Suplizio said. “There was so much relief. I was so excited. I (hit a home run) for the first time last game (a win over Forest Area in the D9 title game). I didn’t really expect it to happen again. It is really exciting.”

Suplizio’s home run capped off a two-out rally for the Lady Cardinals, who had watched GCC starter Emma Henry retire six in a row, all on mostly soft contact before Lydia Morgan singled with two outs in the fifth.

Marina Hanes pinch ran for Morgan, and Kali Franklin singled to right sending Hanes to third bringing up Suplizio, who had one hit in two at-bats prior to the home run.

“I knew I had two girls on and I just wanted to help out my team,” Suplizio said. “I knew I needed to get someone in. I was thinking she was going to throw down the middle. She was throwing pretty much down the gut, low. I just thought take it wherever it was pitched.”

Up 4-2, the game wasn’t without some late drama for DCC.

With one out in the seventh, Erica Rodriguez singled off Morgan Tyler and Macee Magill followed with a chopper to third. Franklin’s throw across was a bang-bang play with the first-base umpire originally calling Magill out before changing his call to safe.

With runners at first and second, Isabella Marquez hit a line drive to Franklin at third who caught the ball and threw to first to double off Magill.

It was the second time in the contest an umpire changed a call.

The first went against GCC in the third inning when Bailey Kuhns singled with runners on first and second only to have DCC centerfielders Kayley Risser throw out Makenzee Kenney at the plate with the home plate umpire originally saying Kenney was safe before changing his call to out.

GCC scored twice in the top of the first against Melia Mistkavich.

Magill led off the inning with a walk and scored on a double by Marquez, although even that play wasn’t without controversy as DCC was called for interference on Magill, who was originally thrown out on the play. The call did appear to be correct, as Mitskavich appeared to interfere with Magill coming home.

Marquez then scored on a ground out by Henry.

Those two runs, though, turned out to be all the Centurions got against Mitskavich and Tyler.

Mitskavich went the first three innings allowing the two earned runs on three hits and a walk while striking out three.

Tyler got the win going four innings allowing no runs on three hits while striking out one.

DCC got a run back in the bottom of the first when Franklin led off with a double to right-center, went to third on a wild pitch, and scored on a one-out infield single by Risser.

The Lady Cardinals had a chance to tie the game in the third when Franklin doubled with two outs but for some reason held at second when Suplizio blooped a single to center with Franklin only going to third because she was standing on second until the ball dropped. Risser followed by popping out to end the inning.

The top third of the DCC lineup – Franklin, Suplizio, and Risser, was 7-for-9 with two doubles, a home run, three runs scored, and three RBIs. They accounted for all but two of DCC’s nine hits.

Dunworth hit a leadoff home run to start the game for the Rammettes, but Johnsonburg’s offense slowed as only two more batters reached safely through the next three innings.

The Indians tied the game in the fourth after Nolah Moyer hit a leadoff single and scored on Alaina Breslsford’s infield grounder.

Payton Delhunty led off the Johnsonburg fifth with a double and moved to third on Maria Casilio’s sac bunt. Dunworth was intentionally walked to put runners on the corners with two outs.

Julia Jones followed with a double to left that brought in Delhunty, and Dunworth was able to come around as well after an error in the field for the final run of the game.

Peterson gave up just one hit through the final two innings to put the game away.

Dunworth had two hits, scored twice and drove in a run. Jones had an RBI and Delhunty scored once.

Peterson allowed one earned run on four hits with a walk and six strikeouts.

Moyer had two of Muncy’s four hits and took the loss in the circle. She allowed three runs, two earned, on four hits with three walks and eight strikeouts.

Johnsonburg advances to the quarterfinals and a matchup with Neshannock, a 6-0 winner over OLSH, on Thursday at a site/time to be announced.

MEADVILLE, Pa. – A 15-strikeout effort by Mikaila Obenrader and a four-run first inning by Saegertown helped the D10 champion Saegertown beat D9 runner-up Elk County Catholic, 6-0, in the opening round of the PIAA Class 1A playoffs Monday at Allegheny College.

A single to right by Rhiannon Paris scored Alyssa Arblaster, who led off the inning with a single, to make it 1-0 before a double steal resulted in a pair of runs when the throw by catcher Caitlyn Vollmer went into centerfield. A double by Hailee Gregor made it 4-0.

The Panthers added a pair of runs in the third thanks to a pair of ECC errors to take a 6-0 lead.

Obenrader helped herself by going 3-for-3 at the plate while Arblaster was 2-for-4 with a run scored.

Emily Mourer had a double for ECC.

Fairview BB Holds Off Hopewell; Saegertown Rolls Past Eden Christian; Cathedral Prep Falls to Laurel Highlands — Powered by North Washington Rodeo
Guth, Franklin Knock Off South Park; West Middlesex Drops Close One to Neshannock Powered by North Washington Rodeo
This website or its third-party tools process personal data.In case of sale of your personal information, you may opt out by using the link Do not sell my personal information.
×
Manage consent