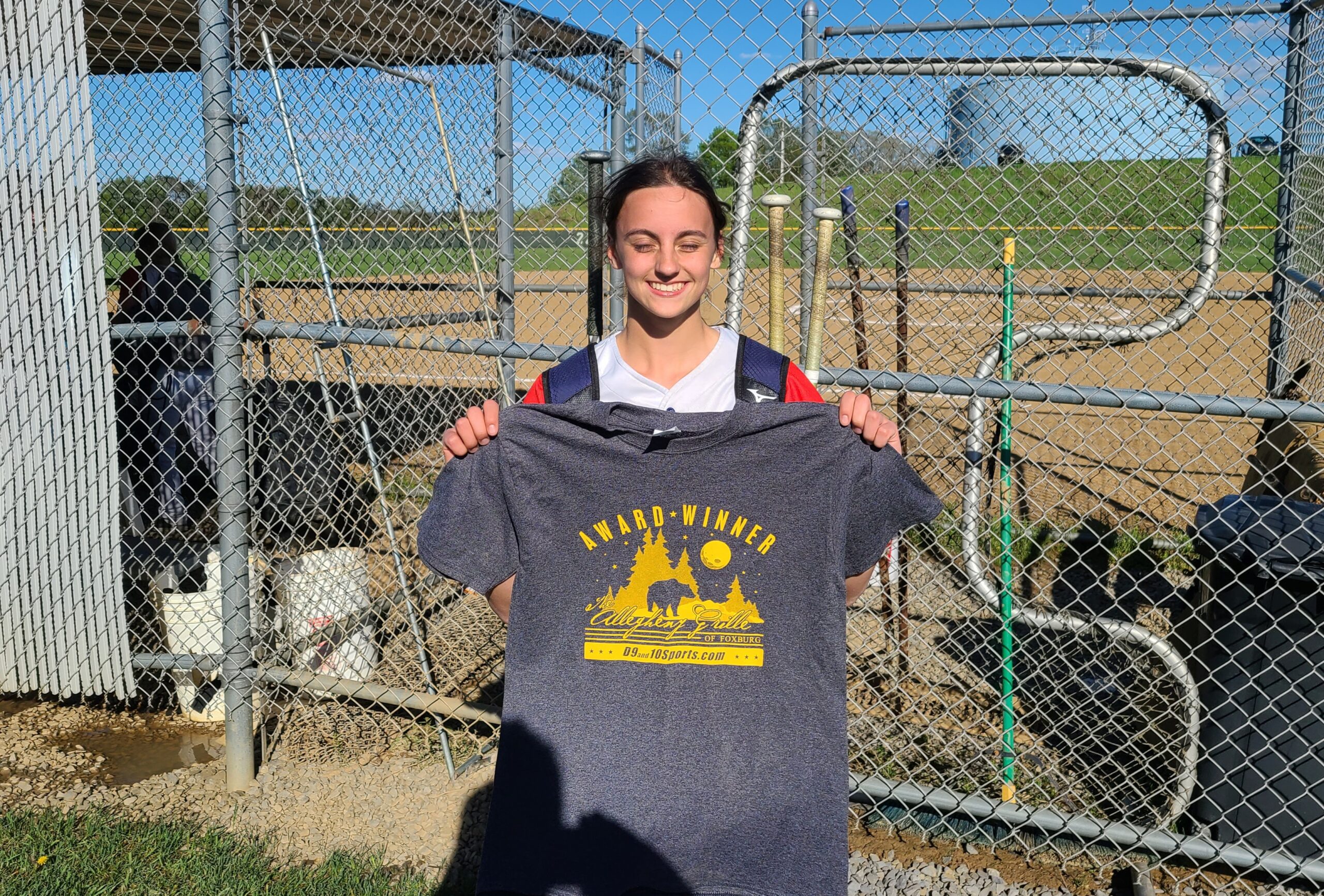 DUBOIS, Pa. – A three-run fifth-inning home run from Madi Hoyt proved to be the catalyst for a 5-4 win by DuBois Central Catholic over visiting Karns City in a battle of two of the premier District 9 teams.

The game was tied at one when Hoyt took an 0-1 pitch from Marra Patton to give the Lady Cardinals a 4-1 lead.

Hoyt was named the Allegheny Grille of Foxburg Player of the Game after going 2-for-3 with a run scored and three runs.

She talked about the win

Kali Franklin was also 3-for-4 with a run scored and an RBI and Kayley Risser was 2-for-3. Savannah Morelli also homered for the Lady Cardinals.

Rossi McMillen was 1-for-2 with a home run, a run scored, an RBI, and a walk for Karns City, which lost for just the second time and saw its 13-game win streak come to an end, with Jada Polczynski going 2-for-3 with a triple and a run scored.

Morgan Tyler got the win going seven innings allowing four runs, two earned, on eight hits and a walk while striking out seven.

Patton took the loss going six innings giving up five runs, four earned, on 10 hits and a walk while also striking out four.

JOHNSONBURG, Pa. – Natalie Dunworth scored on a Julia Jones groundout in the fifth inning to break a two-all tie, as Johnsonburg knocked off visiting DuBois, 3-2.

Julie Peterson tossed a gem for the Ramettes going seven innings allowing two runs, one earned, on seven hits while striking out seven.

Dunworth was 2-for-3 with a double and a run scored to lead Johnsonburg with Zoey Grunthaner going 2-for-3.

Morgan Pasternak was 2-for-3 with a run scored for DuBois with Gabby Gulvas going 2-for-4.

MILL HALL, Pa. – A run in the first inning proved to be all Central Mountain needed, earning a 1-0 victory over Clearfield, handing the Lady Bison just their third loss of the season.

BROOKVILLE, Pa. – St. Marys had 16 hits and Kendall Young fired a one-hitter in a 13-0, five-inning win over Brookville.

TIONESTA, Pa. – In a continuation of a game suspended way back on April 4, Cranberry outscored Forest Area, 4-3, in the eighth inning to take home a 13-12 win.

The Berries had forced the need for a suspended contest April 4 when they scored four in the seventh to tie the game at nine and then added the four-spot in the eighth Tuesday to get the win.

Forest Area got three of the four runs back with no one out in the bottom of the eighth and then loaded the bases with no one out but failed to get the tying run home thanks to back-to-back strikeouts and a ground out with Alisha Beggs getting Cranberry out of the jam to earn the save.

Emily Aites and Madison McFarland both doubled and tripled for Forest Area with Aites going 3-for-5 with a run scored and three RBIs and McFarland 2-for-3 with a walk, two runs scored, and four RBIs.

Maggie Boehme was also 3-for-5 with three runs scored for the Fires with Emma McFarland going 2-for-5 with a walk, two runs scored, and two RBIs.

Plummer got the win going two innings in relief allowing one earned run on two hits while striking out three.

TIONESTA, Pa. – Forest Area rebounded from the loss to Cranberry in the suspended game by getting a great pitching performance from Izabelle Flick in a 5-0 shutout of visiting Keystone.

Emma Gruber was 1-for-3 with a double for Keystone.

Freyer didn’t give up a base runner in three innings of work striking out eight of the nine batters she faced.

It was more of the same in the second game with Freyer only allowing one base runner – on a hit by a pitch – in three innings of work with eight more strikeouts.

DUKE CENTER, Pa. – Kate Rhinehart went 2-for-3 with three RBIs to help Otto-Eldred to an 11-1 win over visiting Galeton in five innings.

Katie Sheeler also doubled for the Terrors, who finished league play a perfect 10-0.

Abby Wolf got the win allowing one run on three hits and a walk while striking out five in five innings.

May 17, 2022 D9 Baseball: Rhoades, Brookville Blank Brockway; Curwensville Sweeps DH; Punxsy Rallies for Win
May 18, 2022 D9/10 Baseball/Softball Schedule Powered by the BHL Sportsperson of the Year Award
This website or its third-party tools process personal data.In case of sale of your personal information, you may opt out by using the link Do not sell my personal information.
×
Manage consent