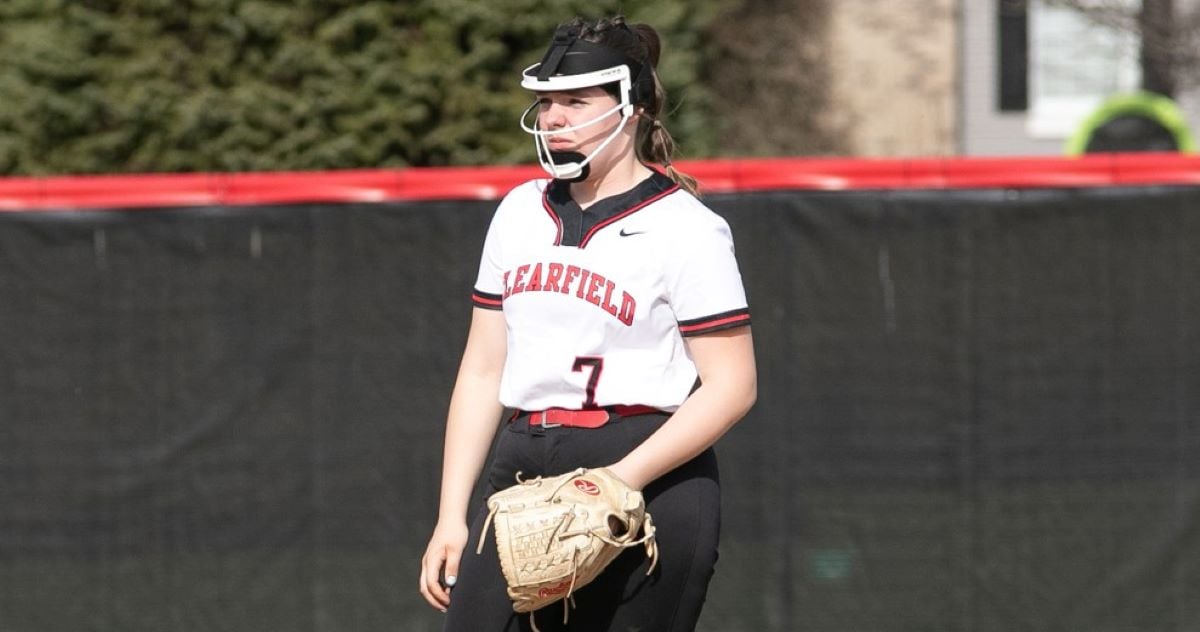 Alaina Fedder's triple with one out in the seventh set up the game-winning run for Clearfield.

DUBOIS, Pa. – Paige Houser didn’t know she was safe until everyone started yelling.

Houser, pinch-running for Clearfield teammate Alaina Fedder in the bottom of the seventh inning of a tie game scored the game-winning run on a wild pitch by Franklin’s Trinty Edge to lift the District 9 champion Lady Bison to a 4-3 win over the District 10 runner-up Lady Knights.

“That was just a lot of anxiety,” Houser said. “I did not break right away.”

Alexis Bumbarger was trying to bunt with one out when the pitch from Edge went over the head of catcher Kirsten Hicks.

Houser took a couple of steps into her secondary lead before realizing the ball was past Hicks and sprinted to the plate.

The ball took a rather favorable Franklin bounce back to Hicks who threw to a sprinting Edge who was covering the plate. The throw beat Houser to the plate, and Edge put the tag on her only to watch the softball trickle out of her glove – although it looked like the home plate umpire was ready to call Houser safe regardless.

That set off a wild celebration for Clearfield with Houser jumping into Bumbarger’s arms as the dugout emptied and Clearfield first-base coach Harlen Funk sprinting across from the coach’s box to meet manager Derek Danver, who was jumping up and down all the way down the third-base line.

The winning run was set up by an Alaina Fedder one-out triple into the right-field corner.

Watch Fedder rounding first on her way to third

“I was 0-for-2 before that,” Fedder said. “Everything was popping up. I was just focused on hitting the middle of the ball, doing what I can.”

The run in the seventh completed a comeback from a 3-2 deficit for the Lady Bison heading to the fifth inning.

But in the fifth, Lauren Ressler singled leading off and Oliva Bender followed with a single before Fedder sacrificed the runners up 60 feet. That led to an RBI fielders’ choice on a bunt by Bumbarger with Ressler scoring and Houser, courtesy running for Bender, moving to third. Bumbarger took second on a throwing error to the plate by Edge.

Franklin had taken the 3-2 lead thanks to a two-run, two-out double in the fourth by Brandy Atwell, who had been moved up to the No. 2 spot in the lineup by manager Chad Hoobler. Atwell went 2-for-4 on the day.

“Brady had a heck of a game,” Hoobler said. “We made a last-minute change and moved her up to No. 2 (in the batting order) because she has been swinging the bat pretty good. It definitely paid off, she had a really good game.”

Early on it looked like Clearfield was going to run away with the game.

After Emma Hipps struck out the side in the top of the first, the Lady Bison took a 2-0 lead in the bottom of the inning when Hipps reached on a wild pitch strikeout, stole second, and scored on a single by Ruby Singleton.

Singleton then scored on a Bender base hit.

But Franklin adjusted at the plate and got a run back in the top of the second when Edge singled leading off, went to third on a single by Gabrielle Laderer, and scored when Hicks reach on an error by second baseman Hertlein.

“We got down early and fought back,” Hoobler said. “We just kept fighting. And the great thing about it is we are a young team. We lose one senior (Atwell), and she is going to be hard to replace. But we look to be back again.”

After scoring the two runs in the first, Clearfield struggled over the next three innings against Edge managing just two hits.

“I can’t say enough about how Trinity pitched,” Hoobler said. “That is a good hitting team, a good team all around.”

After allowing the two-run double by Atwell in the fourth, Hipps retired the final 10 Franklin batters she faced.

Bender led the Clearfield offense going 3-for-4 with an RBI, while Hipps, despite not getting a hit, reached base three times while scoring a run – she reached on the wild-pitch strikeout,an error, and was hit by a pitch.

Clearfield, which reached the PIAA semifinals in Class 3A in 2019, will take on District 3 champion Hamburg, a 5-4 winner over WPIAL runner-up Elizabeth Forward, in the quarterfinals Thursday at a site and time to be announced.

“Final eight baby,” Fedder said. “We need to be a team. We need to come together and pull out this win for the next ones.”

Guth, Franklin Knock Off South Park; West Middlesex Drops Close One to Neshannock Powered by North Washington Rodeo
Redbank Valley, C-L, DCC, Punxsy Baseball All Get First Round PIAA Wins; Jburg Falls Powered by North Washington Rodeo
This website or its third-party tools process personal data.In case of sale of your personal information, you may opt out by using the link Do not sell my personal information.
×
Manage consent