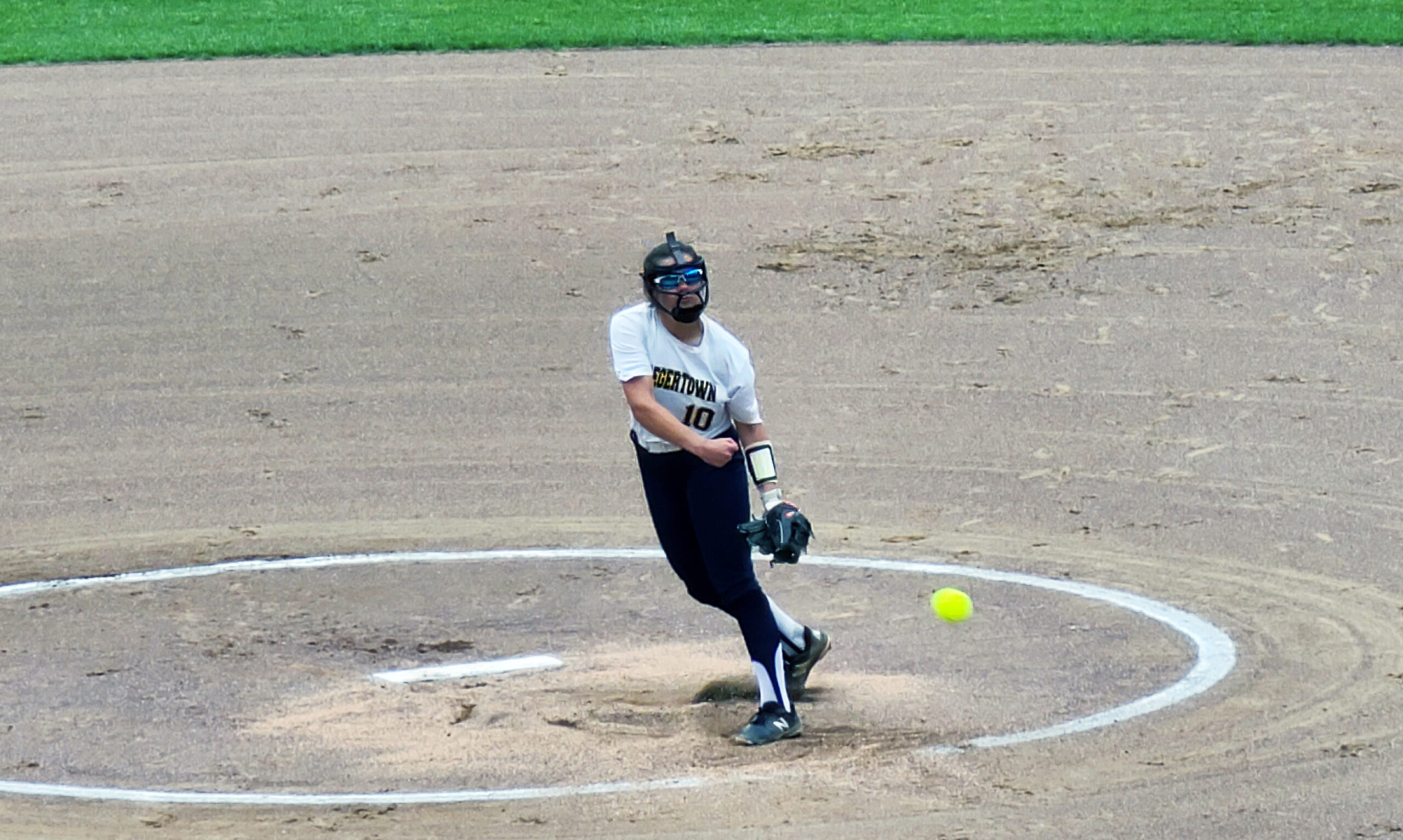 SLIPPERY ROCK, Pa. – All it took was one.

Just one run was all Saegertown needed to punch its ticket to the PIAA Class 1A softball semifinals. The Panthers got that run thanks to Rhiannon Paris’ RBI double in the top of the eighth.

And that one was more than enough as Mikaila Obenrader set down the Scotties in order in the bottom of the inning to close the book on a no-hitter and secure Saegertown’s 1-0 win over Union (New Castle) in the PIAA quarterfinals at Slippery Rock University on Thursday.

Obenrader with an 8-inning no-hitter and Saegertown heads to the 1A semifinal with a 1-0 win o er Union. pic.twitter.com/q2twSyPDg8

“(Paris) has been able to hit timely all year and she’s been such a staple for us on offense,” Saegertown coach Jen Bowes said. “I think that our timely hitting this year has been beyond expectation. I mean, we have kids here that find a way to play big no matter what the situation, and that’s a very special thing.”

“It was a big boost (for the team) and really helped me out,” Obenrader said. “Less stress than it being 0-0.”

Paris nearly put an RBI single down the right field line in the sixth, but the ball hooked and landed just foul. With a similar opportunity in the eighth, Paris delivered. Alyssa Arblaster drew a leadoff walk to start the inning, advanced to second on a wild pitch and went to third on Rylie Braymer’s sac bunt.

Paris stepped in and ripped the first pitch she saw down the line in right. The ball bounced away from Emily Siddall’s glove and to the wall in foul territory allowing Arblaster to score what would be the game-winner.

Paris with this RBI single has Saegertown up 1-0 and three outs from the semifinals. Union coming to bat Bot 8. pic.twitter.com/wCRQXBRL2T

“I have a lot of confidence in (Paris),” Bowes said.

That confidence extends to the field as well, especially to the sophomore standing in the circle.

“We had a game plan today and (Obenrader) executed it well, every pitch,” Bowes said. “Every kid on their team, she knew where to throw and she put it there. Can’t ask for anything better.”

Obenrader was brilliant in the circle. She tossed eight no-hit innings and walked just two batters.

“Oh the things Mikaila has done for us,” Paris said. “We appreciate her, we love her, and she’s amazing.”

Union had one runner get into scoring position, and that lasted for mere seconds. Mallory Gorgacz drew a leadoff walk in the fifth. Siddall put down a sac bunt that Obenrader fielded and threw to Brittany Houck at first. Houck, seeing that Gorgacz had taken a big turn around second, quickly threw the ball to Paris at second. Gorgacz took off for third, but Paris threw to Hailee Gregor who applied the tag for the second out.

Obenrader works around a leadoff walk thanks to this double play. End 5, no score pic.twitter.com/CNxH1Poq4H

“That was huge,” Bowes said. “There’s a lot of times in the game when something happens. You’re like ‘That’s a game changer.’ I think that was a huge game changer for us and it kind of changed the momentum of the game.”

The Panthers seemed poised to seize on that momentum in the sixth. Rylie Braymer drew a 1-out walk, stole second, and went to third on Paris’ ground out. Union pitcher Mia Preuhs got Houck to strike out to end the inning.

Consecutive singles with one out in the seventh had Saegertown knocking on the door, but again Preuhs was up to the task, striking out Maggie Triola and Abigail Kirdahy to end the inning.

Paris hit a 2-out single in the top of the first. It would be the only hit of the game until the fifth when Triola singled.

Saegertown finished with five total hits. Paris had two, while Triola, Gregor, and Katherine Diesing had the others.

Obenrader struck out 11 and walked two in her eight innings.

Preuhs walked four and struck out 15 in the loss.

Saegertown will face District 9 champion DuBois Central Catholic, an 8-2 winner over West Greene, in the semifinals Monday at a site and time to be announced.

DCC Ace Anderson Shutdown Saegertown; C-L Plays to Win but Comes up Short Powered by North Washington Rodeo
PIAA Announces Sites/Times for Baseball/Softball Semifinals
This website or its third-party tools process personal data.In case of sale of your personal information, you may opt out by using the link Do not sell my personal information.
×
Manage consent