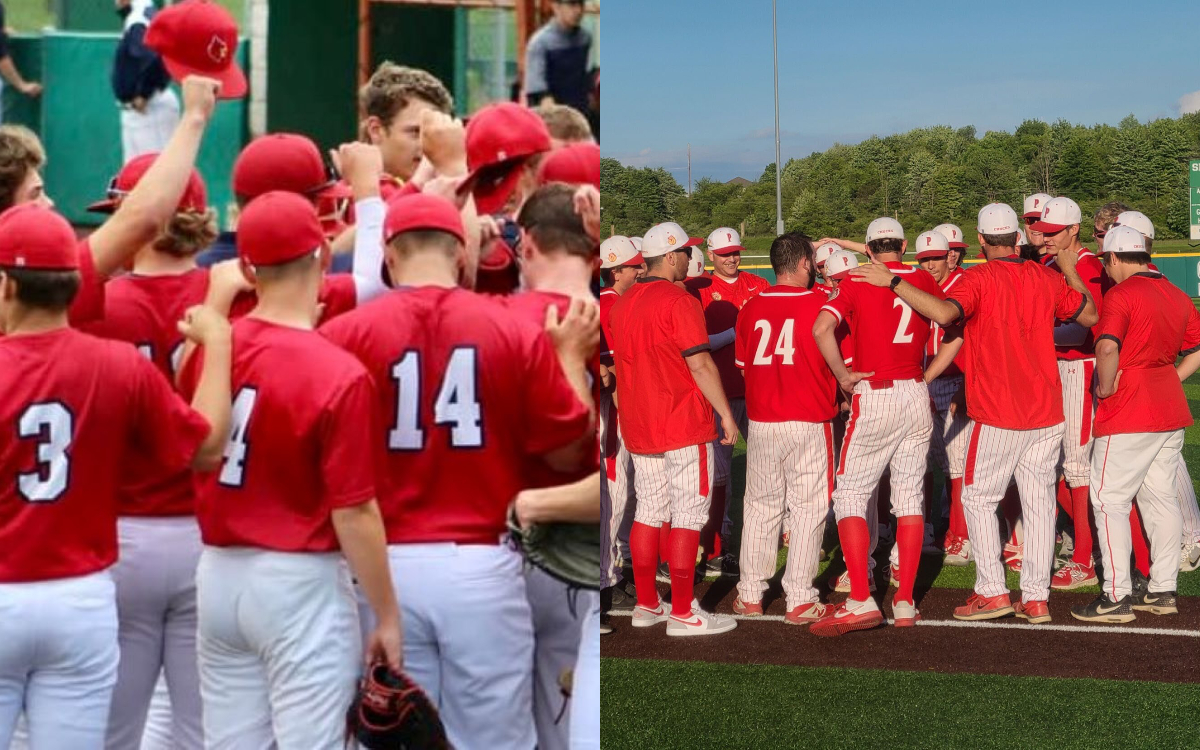 A pair of District 9 baseball teams will vie for a trip to the PIAA championships Monday with Punxsutawney battling Central Martinsburg in Class 3A and DuBois Central Catholic taking on Southern Fulton in Class 1A.

They are trying to become the first District 9 team to reach a PIAA championship game since 2017 when Clarion was runner-up in Class 1A. Elk County Catholic was also runner-up in 2014 in Class 1A, while Johnsonburg was the last D9 team to take home a PIAA baseball title in 2013 in Class 1A.

District 9 hasn’t had two teams reach the PIAA championship game in the same season since 2007 when Punxsy won the 3A title and Johnsonburg was the 1A runner-up.

Here is a quick look at both games

When: 7 p.m., Monday, June 13, at First Commonwealth Field in Homer City
How to Watch/Listen: Unknown
Winner Gets: Winner of the (3-1) Lancaster Catholic vs. (12-1) Neumann Goretti game (3:30 p.m. Monday, June 13 at Boyertown HS) in the PIAA title game at 1:30 p.m. Friday, June 17, at Medler Field at Lubrano Park on the campus of Penn State University in University Park.
About Punxsutawney: The Chucks were the lone D9 Class 3A school to enter the postseason and had to play a subregion with District 5 to advance to the PIAA playoffs where they beat Bedford, 2-0, in eight innings. Punxsutawney then beat Penns Valley, 8-2, in the opening round of the PIAA tournament before rallying to top Franklin, 6-4, in the quarterfinals Thursday when the Chucks scored twice in the sixth and three times in the seventh. Punxsutawney has won 10 in a row since a 10-6 loss to St. Marys April 26, which was the third of three straight defeats.
About Central: The Dragons, who lost to Tyrone in the PIAA semifinals a year ago, 7-1, are spotless on the season sporting a 25-0 record while outscoring its opponents 330 to 35 on the year. It’s been an easy playoff run to this point for Central with a 15-0, four-inning win over Westmont Hilltop to start the District 6 playoffs followed by a 10-0, five-inning win in the semifinals over Bald Eagle Area, and a 7-1 win over Penns Valley in the title game. Then in the PIAA bracket, the Dragons took out Mohawk, 13-3, in five innings in the opening round before topping Fairview, 7-1, in the quarterfinals. Nineteen of the 25 wins have come via the Mercy Rule (either 10-run or 15-run) and a 20th game was also won by at least 10 runs. The only team to even come within a grand slam of the Dragons was Forest Hills, which lost, 8-5, May 16. Central won the 2017 PIAA 3A title and was runner-up in 2A in 2014 and 2010 while also finishing in second place in 1984 in 2A in the old two-class system.
Punxsutawney Key Players to Watch: The Chucks used both of their main pitchers in the win over Franklin with Isaac London throwing 72 pitches and Jake Sikora 61. Sikora has all three postseason wins and is 6-1 on the year with a 2.74 ERA. In 38 1.3 innings of work, he has struck out 39 and walked 28. London is 3-0 on the season with a 1.09 ERA. In 19 ⅓ innings of work, he has 20 strikeouts and three walks. Another key hurler is Josh Tyger (3-2, 3.29 ERA, 27 ⅔ IP, 24 Ks, 9 BB). Offensively, London leads the way hitting .493 with seven doubles and 18 RBIs. He is one of six regulars hitting over .300. Carter Savage checks in with a team-leading three home runs and 22 RBIs while hitting .381, Sikora is hitting .373 with 16 RBIs, Payton Hetrick is hitting .346 with 13 RBIs, and Ashton Stonbraker is hitting .341 with 16 RBIs.
Central Key Players to Watch: The Dragons enter the semifinals with a team ERA of 1.61 led by left-handed ace Jonah Snowberger’s 0.83 ERA. Snowberger is 10-0 on the season and has struck out 78 while walking just 13 in 42 ⅓ innings of work. The 6-foo-4 senior threw 3 ⅓ innings against Mohawk June 6 in the opening-round victory. Devon Boyles (5-0, 1.91 ERA, 29 K, 19 BB, 22 IP) got the start and the win vs. Fairview while Tyler Helsel (3-0, 0.00 ERA, 25 K, 13 BB, 23 IP) also pitched in that game. Jacob Detwiler (5-0, 3.46 ERA, 26 ⅓ IP, 43 K, 27 BB) gives Central four quality arms. On offense, the Dragons are hitting .445 as a team with two regulars over .500. Paxton Kling is hitting a team-leading .577 with five home runs, eight doubles, three triples, and 32 RBIs, while Jeff Hoenstine is hitting .507 with seven doubles and 32 RBIs. Sophomore Hunter Smith has a team-leading 13 doubles to go with a pair of home runs and two triples while driving in 34 and hitting .492, while fellow sophomore Griffin Snowberger is hitting .475 with 31 RBIs. Boyles has a team-best 36 RBIs while hitting .451 with three homers and 10 doubles, Helsel checks in at .443 with 24 RBIs, and Parker Gregg is hitting .439 with 21 RBIs.

When: 2 p.m., Monday, June 13, at Mt. Aloysius College
How to Watch/Listen: DCC will be providing a feed via head coach Adam Fox’s Facebook page with a link available on D9and10Sports.com
Winner Gets: Winner of the 3-2 Halifax vs. 11-1 Tri-Valley (4 p.m. at Wenger Field in Fredericksburg) game at 10:30 a.m. Friday, June 17, at Medler Field at Lubrano Park on the campus of Penn State University in the PIAA title game
About DCC: The Cardinals are the D9 champions with a record of 20-4 and have won 13 in a row since a 3-2 setback to Elk County Catholic in the first game of a doubleheader April 30. DCC beat ECC, 9-4, in the D9 semifinals and then topped Clarion-Limestone, 5-1 in the title game before knocking off Rochester, 15-5, in six innings in the opening round of the PIAA playoffs and then topping Saegertown, 7-1, in the quarterfinals.
About Southern Fulton: The Indians have won six straight since suffering a 9-4 loss to Everett May 18. That was the second of two straight losses for Southern Fulton. In the D5 playoffs, Southern Fulton topped Fannet Metal, 7-1, in the semifinals and then beat Rockwood, 13-3, in the title game. In the PIAA postseason, the Indians topped Williamsburg, 12-4, and then erased a 4-0 deficit after 3 ½ innings to beat Clarion-LImestone, 8-5, in the quarterfinals. The Indians were the PIAA runner-up in Class 1A in 2018.
DCC Key Players to Watch: The Cardinals come into the semifinals with a team ERA of 2.55 led by junior Carter Hickman, who is 9-0 on the year with a 1.47 ERA. In 43 innings of work, he has 53 strikeouts and 31 walks. Hickman was the winning pitcher in the first-round PIAA game against Rochester. Brandin Anderson, who got the complete-game win over Saegertown, checks in with a record of 4-2 with a 3.07 ERA. The Youngstown St. commit has pitched 43 ⅓ innings with 57 strikeouts and 36 walks. Senior Cole Sansom, a Kent State recruit, has been used in a closer’s role and hasn’t allowed an earned run (2 overall) in 13 ⅓ innings of work. He has struck out 31 and walked seven. A pair of freshmen can also be used with Aiden Snowberger sporting a 4-1 mark with a 2.01 ERA and Brayden Fox, the son of manager Adam Fox, coming in at 2-1 with a 2.62 ERA. Snowberger has 32 strikeouts and seven walks in 24 ⅓ innings while Fox has seven Ks and four walks in 10 ⅔ innings of work. On offense, DCC hits .347 as a team with five regulars above .350. Fox leads the way at .476 with five doubles, two triples, and a team-leading 35 RBIs, while Snowberger checks in at .416 with eight doubles and 22 RBIs. He leads the team with 31 runs scored. Hickman is hitting. 394 with six doubles, two triples, and 17 RBIs, Kaden Brezinski is hitting .379 with a team-best three home runs to go with eight doubles and 27 RBIs, and Sansom is hitting .353 with six doubles, two triples, and 19 RBIs.
Southern Fulton Key Players to Watch: The Indians come into the game with a 1.61 ERA led by seniors Holden Stotler and Konner Pittman. Stotler started the game vs. C-L in the quarterfinals but had trouble giving up four runs and eight hits in three innings of work before Pittman came on and shut down the Lions allowing an unearned run to get the win. On the season, Stotler is 6-0 with a 1.88 ERA. In 48 ⅓ innings of work, he has 44 strikeouts and 22 walks. Pittman is 4-1 with a 0.76 ERA. In 27 ⅔ innings of work, he has 22 strikeouts and 13 walks. Southern Fulton also could use Ethan Mellott, who is 2-0 with a 1.09 ERA. In 19 ⅓ innings of work, he has 19 strikeouts and six walks. On offense, the Indians are led by catcher Trayton Younker, who is hitting .474 with five home runs, eight doubles, and 32 RBIs. His three-run home run in the fourth inning vs. C-L started the comeback. Pittman checks in hitting .429 with a homer, 10 doubles, and 24 RBIs, while Powell is hitting .414 with 18 RBIs. Dane Harvey gives Southern Fulton four hitters over .400 checking in at .405 with four homers, 12 doubles, a triple, and 33 RBIs. Zach Price has also driven in 26 runs while hitting .371.

Meadville VB Drops Five-Set Heartbreaker to Lower Dauphin in PIAA Class 2A State Title Match
DCC/Saegertown Battle for 1A PIAA Softball Title Game Berth; Clearfield Tries to Upend Defending Champ Beaver Powered by North Washington Rodeo
This website or its third-party tools process personal data.In case of sale of your personal information, you may opt out by using the link Do not sell my personal information.
×
Manage consent