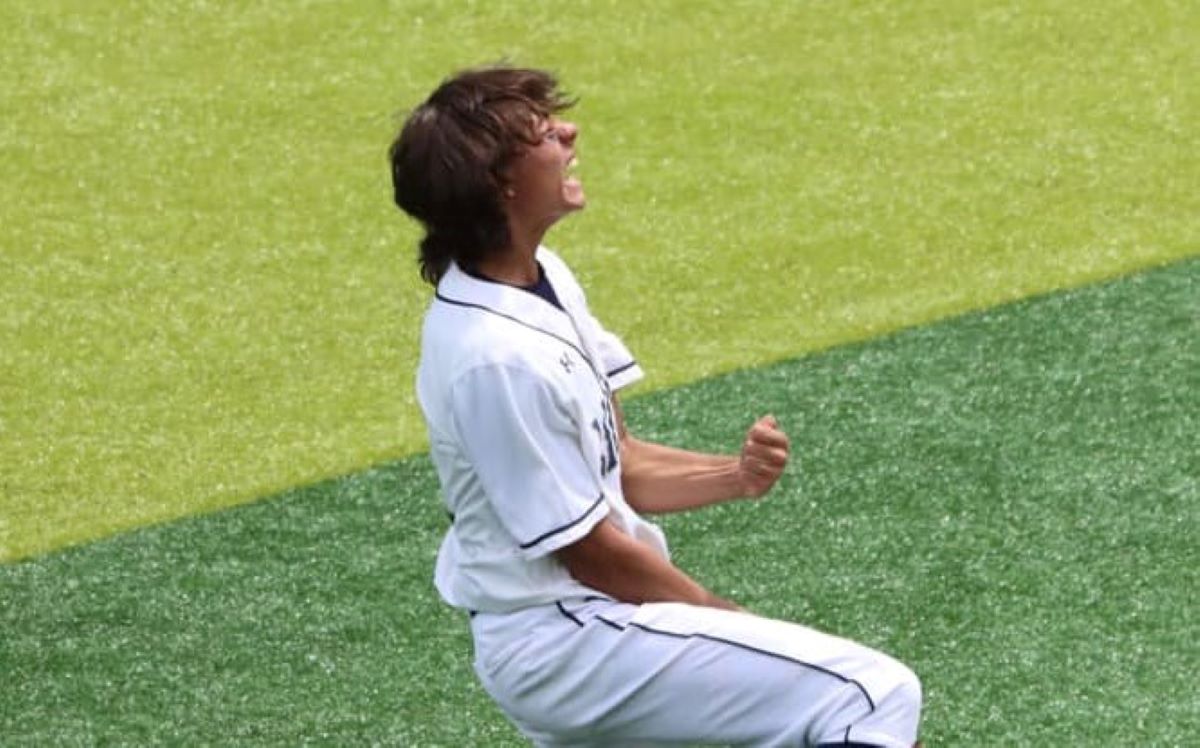 C-L's Logan Lutz reacts after making a sensational catch with the bases loaded and two outs in the fourth inning. Photo by Maria Wilson

DUBOIS, Pa. – Logan Lutz dove, caught the ball, got up, screamed while pumping his fist, then flexed before chest pumping with centerfielder Corbin Coulson.

Logan Lutz sprawls out to make the catch. Photo by Maria Wilson

It was only the fourth inning, and the game was far from over.

Logan Lutz celebrates with centerfielder Corbin Coulson after he robbed Devon Lauer of at least three RBIs in the fourth inning. Photo by Maria Wilson

But Lutz may have just saved Clarion-Limestone’s season.

The freshman left fielder had just made the catch of the year on a sinking line drive by Clarion’s Devon Lauer with the bases loaded and two outs in the fourth with C-L leading the rival Bobcats 2-0.

At best, without that catch, the Lions trail 3-2 – and perhaps 4-2 considering Lauer can fly and there was no one else near the ball.

Instead, C-L held a 2-0 lead, and while Clarion eventually tied the game at two the Lions went on to win 7-2 in the District 9 Class 1A semifinals at Showers Field in DuBois to advance to the District 9 title game for the first time since 2005.

The catch wasn’t the only reason Lutz was named the Allegheny Grille of Foxburg Player of the game, though.

His hustling two-out double in the sixth inning after Clarion had manufactured a pair of runs in the fifth to tie the game at two set up Tommy Smith’s full-count go-ahead single left-center to help the Lions regain the lead.

“I hit right down the line,” Lutz said. “I was thinking two. Coach (first base coach Bill Smith) told me to go. So, I went. I got to second. That was it.”

Holding the one-run lead, C-L tacked on four important insurance runs in the top of the seventh to break the game open with the big hit being a two-run double into the right-centerfield gap by Jake Smith.

“We were really relieved about (those runs),” Lutz, who wasn’t even born the last time C-L played for a D9 title, said. “It means everything (to be in the title game). For the team, the coaches, myself, family members, it means everything to us.”

The Lions’ win was a true team effort, and it started on the mound with senior starter Bryson Huwar.

Pitching on just one day’s rest after throwing 52 pitches in the quarterfinal win over A-C Valley/Union Tuesday, Huwar didn’t have his best stuff Thursday and, in fact, walked five batters and hit two more after entering the game having walked just seven all season.

But Huwar tipped toed his way through raindrops all afternoon forcing Clarion to strand nine runners through the first six innings, including getting out of bases-loaded jams in the first and fourth. The Bobcats were just 1-for-10 in the game with runners in scoring position.

The fourth inning was probably the inning Clarion wished it had back.

Noah Harrison doubled to lead off the inning, and Gabe Simko pinch ran for him.

Ryan Alston then walked, and ball four was a wild pitch that allowed Simko to go to third. Alston made a wide turn around first and tried to go to second after the ball was thrown to third trying to get Simko. But Huwar recognized that after getting the ball back from Brady Fowkes the third baseman and threw Alston out at second.

Derek Smail then reached on a fielder’s choice with Simko getting back in safely at third on a throwing error by catcher Jake Smith, who had Simko dead to rights after the throw went home but threw high to third.

Bryce Brinkley then walked to load the bases with just one out for Dawson Smail, Clarion’s best hitter.

C-L manager Todd Smith played his infield in despite the two-run lead, and the gamble paid off when Smail hit a sharp grounder right at second baseman Jase Ferguson, who fired home to retire Harrison, who had re-entered the game when Simko was hurt getting back into third earlier in the inning.

That then led to Lutz’s highlight-reel catch on the ball hit by Lauer.

Clarion did get the game tied in the fifth when Lapinto was hit by a pitch leading off the inning, stole second, and scored on a Chase Kriebel double off the centerfield wall.

Huwar got the win going six-plus inning before reaching his 105-pitch limit on a Lapinto single leading off the seventh. He gave up two runs, both earned, on five hits, five walks, and the two hit batters while striking out two.

Tommy Smith came on and got the final two outs thanks in part to some shaky baserunning by Clarion.

After Smith struck out Kriebel, Lapinto was caught trying to steal second. Then, after Girvan walked, he was out at second for the game’s final out trying to advance on a wild pitch.

Devon Lauer took the loss for Clarion in relief allowing four earned runs on five hits and a walk while striking out two in 2 ⅓ innings of work.

Derek Smail was perhaps the surprise starter for the Bobcats, and the freshman handled himself well going four innings allowing two runs, one earned, on three hits, and five walks while striking out two.

Girvan pitched ⅔ of an inning giving up one unearned run on one hit.

C-L had three players with two hits each.

BROCKWAY, Pa. – DuBois Central Catholic is back in the D9 Class 1A championship game with a 9-4 semifinal victory over Elk County Catholic.

DCC, which beat ECC in the title game a year ago, scored six runs in the third inning to take a 7-3 lead.

In the third, Aiden Snowberger and Matt Pyne got the rally started with a single and a walk, and both were driven in on Brayden Fox’s two-run triple. Carter Hickman drove in Fox with a double, which was followed by a Kaden Brezenski two-run home run. Blake Pisarchik put the finishing touches on the inning with an RBI double that brought in courtesy runner Andrew Green.

The Cardinals tacked on two more runs in the sixth on Hickman’s sacrifice fly and Brezenski’s RBI single.

ECC had scored three runs in the top of the third to take an early 3-1 lead on a David Anderson bases-loaded, bases-clearing triple.

Fox and Brezenski finished with three RBIs each for DCC, while Snowberger was 3-for-3 with two runs as eight of the nine Cardinal starters recorded a hit.

Hickman went five innings to get the win. He allowed four runs (one earned), surrendering four hits, striking out four, and walking four. Cole Sansom was dominant in two scoreless innings of relief, striking out all six batters he faced.

Luke Ginther added a solo home run in the fifth inning for ECC.

The Cardinals will face Clarion-Limestone in the title game at 4 p.m. Monday at Showers Field in DuBois.

Back-to-Back Blasts by Billotte, Prestash Spearhead Clearfield’s 4A Title Game Win Powered by North Washington Rodeo
Hipps Lifts Clearfield to Third Straight D9 Softball Crown as Lady Bison Take 4A Title Powered by North Washington Rodeo
This website or its third-party tools process personal data.In case of sale of your personal information, you may opt out by using the link Do not sell my personal information.
×
Manage consent