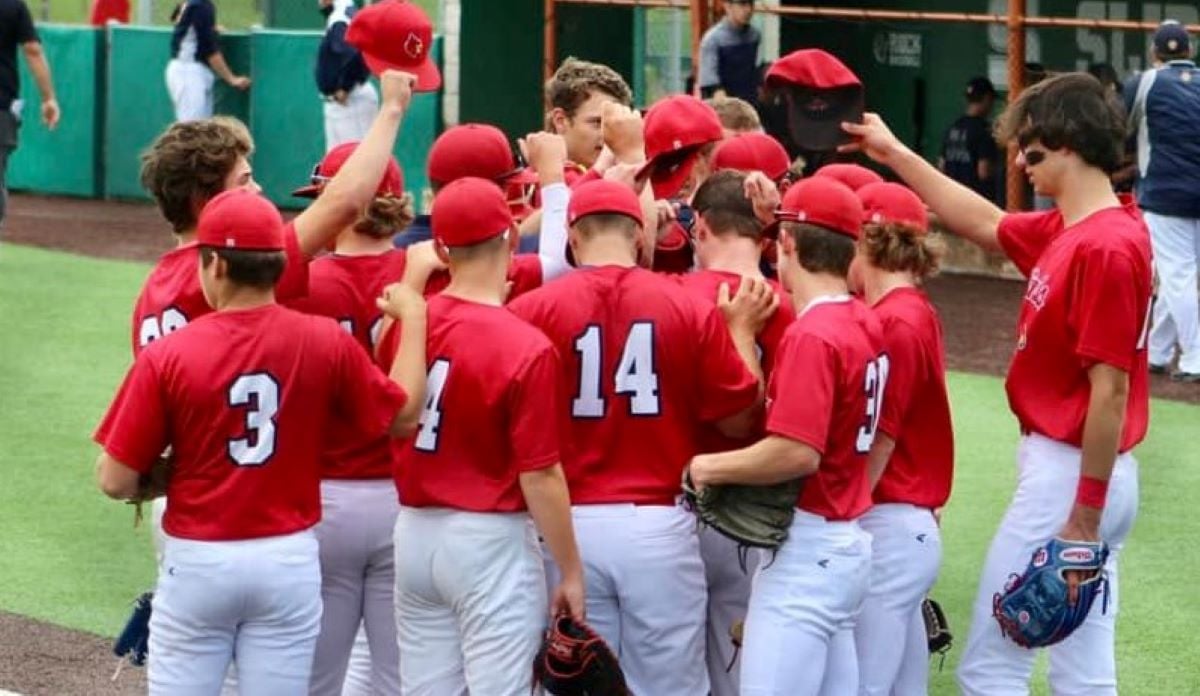 SLIPPERY ROCK, Pa. – Brandin Anderson pitched like the ace that he is and the DuBois Central Catholic offense kept rolling in a 7-1 win over District 10 champion Saegertown in the PIAA Class 1A quarterfinals on Thursday.

Anderson fired a complete-game four-hitter and the DCC offense put up a pair of crooked numbers with four runs in the third inning and three more in the fifth.

“We told them today it was a business trip,” said DCC manager Adam Fox. “These guys aren’t satisfied. They want it. That’s the difference. I think sometimes you make it this far and you kind of get satisfied. That’s one thing we’re feeding this group is to stay hungry.”

Anderson breezed through the early stages of the game, retiring the first ten batters he faced, without going to a three-ball count on any of them. His lone blemish came in the fourth inning when Saegertown’s Dylan Flinchbaug had an RBI single that brought in Henry Shaffer, who reached on a fielder’s choice.

“My plan today was first-pitch strikes and get ahead on the batters,” Anderson said. “I just executed the pitches. Between me and Ben (Gritzer), our catcher, and our pitching coaching, there’s just great trust.”

Offensively, the Cardinals got to Saegertown starter Zach Balog, who allowed just one baserunner through two innings. Balog came in with a 7-0 record, suffering his first and only loss of the season on this day.

In the third, the Cardinals did all of their damage after two outs.

“It’s a process,” Adam Fox said. “They have an approach and they trust it. They grind out at bats. No matter who’s out there, they’re setting themselves up for success.”

Anderson, meanwhile, was in a groove, allowing just one runner to get in scoring position over the final three innings.

“He’s been really turning the corner, just in terms of execution of his pitches,” Adam Fox said. “He’s been battling that since he started with us. He came out today, filled up the zone, had a smooth first inning and it was just him attacking the strike zone today and trusting his stuff.”

The Cardinals three-run fifth was once again spearheaded by the middle of the lineup – the top four hitters in the lineup – Snowberger, Hickman, Fox and Brezenski combined to go 7-for-14 with seven runs and four RBIs.

Hickman doubled to lead off the fifth and Fox single wasn’t fielded cleanly in center, allowing Hickman to scamper home. Brzezinski followed with an RBI double and Gritzer brought in Brezenki on a ground out.

All this offense came against a Saegertown team that had allowed two runs or fewer in each of its last six games.

Anderson also had two hits, part of a 10-hit attack. His final line included five strikeouts (including two in the seventh) and three walks. He threw 65 of his 102 pitches for strikes.

The Cardinals advance to play District 5 champion Southern Fulton, an 8-5 winner over D9 runner-up Clarion-Limestone, in the PIAA semifinals on Monday at a site and time to be determined.

“This is such a special group,” Fox said. “It’s fun to see them shine out there. That team (Saegertown) is awesome. They were 19-2 for a reason. They’ve got some studs and we were good enough today to keep them at bay.”

In the other half of the bracket, District 11 champion Tri Valley shut out District 6 champion Bishop McCort, 12-0, and District 3 runner-up Halifax beat District 2 champion MMI Prep, 3-1.

HOMER CITY, Pa. – Sometimes it is better to score late than score early.

District 5 champion Southern Fulton plated all eight of its runs in its final three at-bats to erase an early 4-0 deficit on its way to an 8-5 win over District 9 runner-up Clarion-LImestone at First Commonwealth Field in Homer City.

“We played to win today,” C-L manager Todd Smith said. “We have no regrets.”

Perhaps Smith was talking about a couple of possible runs the Lions could have had that they didn’t and a couple of runs C-L gave up that perhaps it shouldn’t have.

While the Lions built the 4-0 lead, it could have been much worse, especially in a two-run second inning that saw C-L commit two of the outs on the base paths.

After Jordan Hesdon led off the inning with a single and stole second, Nick Aaron came through with a one-out single to center. But Hesdon got a late break from second, and despite there being just one out, Smith, coaching third, sent him home where he was easily thrown out on a relay from shortstop Konner Pittman.

A walk to Corbin Coulson and a single to left by Jake Smith loaded the bases for Kohen Kemmer, who came through with a two-out, two-run single to center. But Jake Smith, the catcher, was thrown out going to third to end the inning with the top of the order coming up.

Those missed runs in the second were coupled with a pair of runs that the Lions possibly might not have given up in a five-run fourth for Southern Fulton that erased the 4-0 C-L lead.

With three runs in already, the Indians loaded the bases for their leadoff man Kasey Fitz, who worked the count full against C-L starter Tommy Smith.

Knowing the runners would be running on the full-count pitch, Todd Smith called for a pickoff play at first with first baseman Aaron needing to get back to the bag after playing behind the runner.

But disaster struck when Tommy Smith’s throw was wild allowing not only the tying run to score but also the runner at second, Holden Stotler, to race home as well to give Southern Fulton the lead.

“I think we had the pickoff over there at first base to get us out of the inning,” Todd Smith said. “We just didn’t make the play.”

Despite it being unusual to see a pickoff throw in that situation, Todd Smith defended the move.

The first three Southern Fulton runs in the inning came on a home run to left by Trayton Yonker after C-L had a chance to turn a double play on a ball hit by Pittman but couldn’t.

“We just had that bad inning,” Todd Smith said. “That home run was kind of a backbreaker.”

Down a run, the Lions tied the game in the top of the fifth when Tommy Smith reached on a wild pitch/strike out, Bryson Huwar singled to left to start the inning. After a Hesdon grounder resulted in Tommy Smith being out at third, Jase Ferguson lined out to center.

But Huwar was able to score when a ball hit by Aaron was booted by shortstop Levi Souders.

Despite Tommy Smith having given up the five runs in the fourth, C-L stuck with the sophomore righty in the fifth even after he gave up a leadoff double to Pittman and then threw a wild pitch to send Pittman to third.

With Tommy Smith visibly tiring, he dug deep and struck out Dane Harvey but then walked Yonker, who stole second

Jett Burger then grounded a ball to the third-base side of the mound, and Tommy Smith’s only chance was a play at third with the throw being late to get Pittman going back to the bag.

Souders then lined a two-run single to left to put the Indians ahead, 7-5.

“(Tommy) was our best chance,” Todd Smith said when asked why he left Smith in with the game on the line.

Southern Fulton added an insurance run in the sixth off reliever Logan Lutz, who came on to replace Tommy Smith after Smith had reached his 105-pitch limit at the end of the fifth.

It was a double by Yonker that scored Pittman, who had singled with two outs.

After the two-run second, C-L built the lead top four with two more runs in the third when Lutz and Tommy Smith opened the inning with back-to-back singles, and Lutz scored on a wild pitch before Smith came home on a sac fly by Hesdon.

But after three innings, Southern Fulton changed pitches going from its ace Stotler, who came into the game 6-0 with a 1.39 ERA, to Pittman, who was 3-1 with a 0.89 ERA.

Pittman shutdown the Lions allowing just the one unearned run on four hits while striking out five.

“There was a little more difference in speed between his fastball and his off-speed stuff,” Todd Smith said. “The first pitcher, it was more similar. We didn’t have to sit back as much. We still hit the ball. We didn’t strike out much. We hit some good shots to the outfield, but they got caught.”

Yonker was the offensive leader for Southern Fulton going 2-for-3 with a home run, a double, a walk, two runs scored, and four RBIs. He also reached base on a strikeout wild pitch.

Aggressive Approach Pays Dividends as DCC Tops Rival West Greene in PIAA 1A Quarterfinals Powered by North Washington Rodeo
Obenrader Throws No-Hitter, Paris Drives in Lone Run as Saegertown Tops Union (New Castle) in PIAA Class 1A Quarterfinals Powered by North Washington Rodeo
This website or its third-party tools process personal data.In case of sale of your personal information, you may opt out by using the link Do not sell my personal information.
×
Manage consent