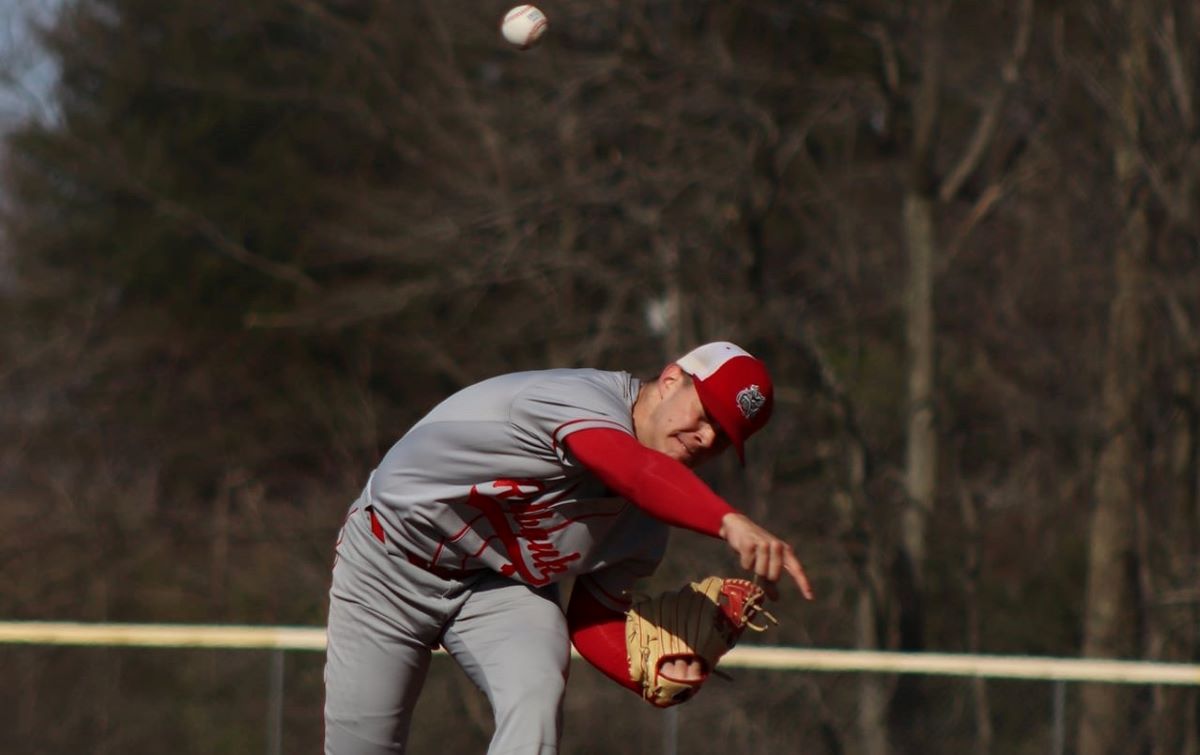 Bain drove in both Redbank runs, including the go-ahead RBI single that brought in Owen Clouse.

On the mound, Bain went six innings, combining with Ty Carrier on a two-hitter.

Serra Catholic scored its lone run in the first inning when an error on a ground ball off the bat of Joe DeMoss brought in Isiah Petty, who walked to start the inning. It was part of a 31-pitch first inning for Bain, who really settled in after that.

Bain tied the game in the fourth inning on a single that brought in Tate Minich, who had doubled off the center-field fence.

Bain combined with Ty Carrier on a one-hitter. Carrier came on with runners on first and second and no outs in the seventh and immediately induced a double-play ball of the bat of Nico Eremic, followed by a groundout to end the threat.

Carrier went on to pitch a 1-2-3 eighth, including striking out DeMoss to end the game.

The Eagles also had a runner thrown out at the plate, when DeMoss tried to score on a Bain wild pitch in the sixth. The ball bounced back to catcher Tate Minich, who flipped to a covering Bain to get the out.

The Bulldogs advance to play Burgettstown, a 6-5 winner over D9 champion Johnsonburg, on Thursday at a site and time to be announced.

Kohen Kemmer drew a leadoff walk in the eighth and singled when a bunt single by Logan Lutz resulted in a throwing error. After Tommy Smith was intentionally walked, Bryson Huwar delivered the big blow, a two-run triple that scored Lutz and Smith.

Smith pitched the final three innings in relief of Huwar to get the win, including a scoreless eighth with a pair of strikeouts.

C-L led 3-0 thanks to a three-run second inning, but Union came back and tied the game with three runs of its own in the fifth. Each team scored single runs in the sixth and seventh innings, sending the game to extras.

Smith’s RBI single gave C-L a 4-3 lead in the sixth, with Union tying the game in the bottom half of the inning when Dayne Johnke was hit by a pitch with the bases loaded and two outs. Smith was able to get a fly out to keep the game tied.

In the top of the seventh, Jordan Hesdon walked to lead off the inning and came around to score on an error on a ground ball off the bat of Corbin Coulson. The Scotties tied the game in the seventh when Grayson Blakely scored on an error on a bunt by Tyler Staub.

The top three in the C-L lineup – Lutz, Smith and Huwar combined to go 8-for-12 with six runs and three RBIs.

With the win, C-L will face Southern Fulton, a 12-4 winner over Williamsburg in the quarterfinals on Thursday.

DUBOIS, Pa. – District 9 champion DuBois Central Catholic had 15 hits and scored in every inning in a 15-5, six-inning win over Rochester in the first round of the PIAA playoffs.

Brayden Fox got the scoring started for the Cardinals with an RBI double in the first inning, scoring Snowberger, while an error on a ground ball hit by Kaden Brezenski allowed the second run of the innings to cross the plate.

The Cardinals broke the game open in the second inning, taking a 7-0 lead on an RBI double by Snowberger, an RBI single from Hickrman, a two-run double off the bat of Brezenski and an RBI fielder’s choice from Ben Gritzer.

That chased Ethan Blair, who gave up seven runs in one-plus inning.

In addition to Snowberger and Hickman, Cole Sansom, Brezenski, and Carter Kosko all had two hits each. Sansom had a double and three RBIs, one of eight two-baggers the Cardinals hit in the game. Fox and Andrew Green scored three runs each.

With the win, DCC advances to play D10 champion Saegertown, a 9-2 winner over Eden Christian, in the quarterfinals on Thursday.

DUBOIS, Pa. – Punxsutawney scored five runs in the fourth inning on its way to an 8-2 win over Penns Valley.

London also had an RBI double in the third inning and an RBI single in the fifth.

Jake Sikora got the win, allowing one run in five innings.

With the win, Punxsy advances to play Franklin in the quarterfinals on Thursday at a site and time to be determined.

The Rams built a 3-0 lead on Aiden Zimmerman’s RBI single in the first inning and Collin Porter’s two-run double in the second.

Andrew Bredel drew a bases-loaded walk just ahead of Kuzior’s slam in the third.

Johnsonburg got back within one, 5-4 on Dom Allegretto’s RBI single in the fourth, but Burgettstown got the run right back in the top of the fifth on Kuzior’s RBI single.

The Rams again got to within one on Kaden Dennis’ RBI groundout in the fifth that brought in Cam Marciniak, but were unable to push the tying run across.

Allegretto and Marciniak had two hits apiece to pace the Rams’ offense, while Jefferson Freeburg went 1-for-2 and scored two runs.

Bredel got the win for Burgettstown, allowing three earned runs in 5 ⅔ innings, striking out seven, walking two and surrendering eight hits. Kuzior tossed 1 ⅓ scorless innings of relief to pick up the save.

With the win, Burgettstown advances to play D9 runner-up Redbank Valley in the quarterfinals on Thursday. The Bulldogs beat WPIAL champ and previously unbeaten Serra Catholic, 2-1 in eight innings.

Houser Dashes Home to Lift Clearfield SB Past Franklin Powered by North Washington Rodeo
PIAA Announces Sites/Times for Baseball/Softball Quarterfinals
This website or its third-party tools process personal data.In case of sale of your personal information, you may opt out by using the link Do not sell my personal information.
×
Manage consent