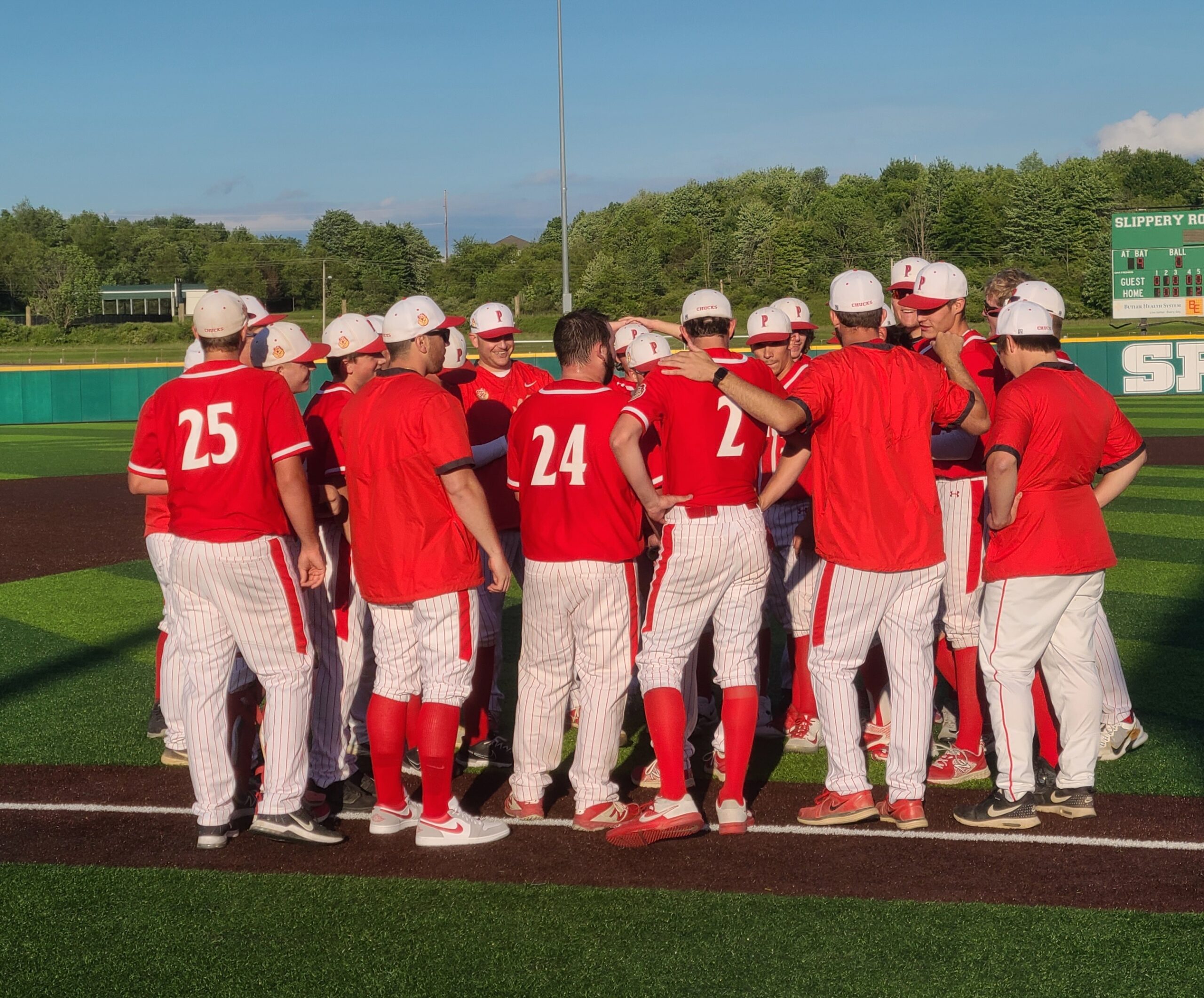 Down to their final out, Punxsutawney scored three runs in the top of the seventh to come back for a thrilling 6-4 win over Franklin in the PIAA Class 3A quarterfinals on Thursday.

“There’s no clock,” said Punxsutawney coach Mike Dickey. “These guys fought their butts off. That was an unbelievable battle. Just a gutsy effort.”

Trailing 4-3 with two down, Josh Tyger hit a chopper to short. Franklin’s Luke Guth fielded the ball cleanly and fired a strike to first, but Tyger narrowly beat the play, bringing in Isaac London (who singled to start the inning) with the game-tying run.

Ashton Stonbraker followed and laced Ethan Nightingale’s 1-1 pitch to deep center that brought in Peyton Hetrick (who singled), as well as Tyger.

“I was looking fastball,” Stonbraker said. “He gave me one right down the middle and I really got a hold of it. It’s great to come up big in a game like this. We haven’t been here in a while, so it was nice to come up big in that situation.”

Jake Sikora, who threw 70 pitches and got the win in the first round against Penns Valley on Monday, tossed the final three innings against the Knights, including a scoreless seventh.

Franklin threatened in their final at-bats, as Carson Wible led off the inning and reached on an error, going all the way to second on the play. Sikora battled, however, retiring the 4-5-6 hitters in the Franklin lineup – Noah Kockler, Aidan McCracken, and Kyle Alexander in order to finish the game off.

The final pitch of the game saw Alexander lace a ball up the middle that Sikor was able to knock down and fire to Carter Savage at first for the out.

“So many big plays,” Dickey said. “Josh Tyger getting down the line on a two-out chopper to short and beating Guth’s arm to first, how huge was that? And then Stony hits the big one in the gap. Just up and down I can’t say enough about everybody on this team.”

It was a game that was tied 1-1 on Noah Kockler’s RBI single in the first inning for Franklin and Justin Miller’s run-scoring double for Punxsy in the second.

The Knights took the lead in the fourth (the final inning for London, who started the game on the mound for the Chucks) on Caleb Doye’s RBI single, one of his three hits on the day. The ball was knocked down by shortstop Coy Martino, who fired a strike to home to nab Drew Kockler, who was attempting to score on the play.

Sikora came on in the fifth, and with one out, Alexander ripped a ball to left-center, bringing in Wible and Kockler, who both walked to start the.

“After the start he (Sikora) had, to get out of that inning with only two scored was huge,” Dickey said. “Isaac has been working back, he’s only going to get stronger. That was a lot to expect out of him. I didn’t want them to see him for the fourth time.”

Alexander came on in relief of Zach Boland (who allowed one run in four innings) in the fifth.

In the sixth, Savage made it a one-run game with an RBI single and Miller got Punxsy back within one. With one out Miller hit a ball to short with the bases-loaded that brought in pinch-runner Jake Henretta. Guth flipped the ball to Doyle, who was unable to field it cleanly. No matter, as Doyle made up for it by snaring a line drive off the bat off Bennett and stepping on first for a double play to end the threat.

“When Zeke lines into that double play, you’re thinking how many times can we barrel the ball today,” Dickey said. “I didn’t think the baseball gods were smiling on us, but they were. We battled, they (Franklin) didn’t give us anything.”

Sikora got the win, while Nightingale suffered the loss. Both starters went four innings, with London allowing two runs and Boland one.

London and Tyger finished with two hits apiece for the Chucks, as eight of the nine starters recorded a hit.

Doyle had three hits and Alexander two for the Knights.

With the win, Punxsy advances to play undefeated Central Martinsburg, a 7-1 winner over D10 champion Fairview, in the PIAA semifinals on Monday at a site and time to be determined.

“This team believes and we’re going to give it our best shot,” Dickey said. “They’re undefeated for a reason. They’ve got some studs, but we’re going to battle.”

SLIPPERY ROCK, Pa. – A season that saw Redbank Valley go as far as they ever have come to an end in a 6-4 loss to Burgettstown in the PIAA Class 3A quarterfinals.

It was a game which the Bulldogs led 3-0 after a three-run second inning, but Burgettstown came back with four runs in the third.

Redbank Valley starting pitcher Ty Carrier faced just one over the minimum in the first two innings but ran into trouble in the third. After a groundout to start the inning, No. 9 hitter Jackson LaRocka got things going with a single. Nathan Klodowski, the starting pitcher, followed with the second of his three hits on the day to put runners on first and second. After a flyout, AJ Kuzier ripped an RBI single, which was followed by a two-run double from Andrew Bredel. Luke Lounder put the finishing touches on the inning with an RBI single.

All this was enough to chase Carrier, with Cam Wagner coming on in relief.

“With Ty, we know they’re going to put the ball in play because he’s not a strikeout guy,” Hibell said. “They had some singles that found some holes.”

All this came an inning after the Bulldogs took a 3-0 advantage. Bryson Bain got that inning started with a triple. After a walk to Breckin Minich, Carrier followed with an RBI groundout. Mason Clouse put runners on the corners with a single. With Wagner at the plate, Minich scored on a wild pitch, with Clouse going to third. Clouse scored the third run of the inning on Wagner’s groundout.

Klodowski got stronger as the game went on. He went the distance, allowing seven hits and one walk while striking out 12, throwing 75 of his 100 pitches for strikes.

“We knew his slider was good, we knew that was his pitch,” Hibell said. “I expected him to throw a few more fastballs just based on the velocity he has, but he was able to live off his slider and curveball pretty well. He’s a solid pitcher.”

The Bulldogs put two runners on in both the fourth and seventh innings, but Klodwski was able to work his way out of trouble each time, including striking out the side in the seventh.

“We just had too many swings and misses, got ourselves into some non-competitive at-bats where he was able to get some easy strikeouts,” Hibell said. “If you don’t put the ball in play enough, it’s hard to come back. We had our shots, just not enough of them.”

Mason Clouse had two of the Bulldogs’ seven hits.

Despite the loss, it was still a season in which the Bulldogs went as far as they have ever gone in postseason play.

“Our goal every year is to get our team the farthest they can get,” Hibell said. “Sitting in the dugout after the loss to Johnsonburg (in the D9 title game) I didn’t know what the next step was. Play-in game victory, and state playoff victory were a little bit icing on the cake for us. We’re happy to be here, but at the moment, it leaves a bad taste in our mouths.”

Burgettstown moves on to play Neshannock, a 5-4 winner in 11 innings over Riverside, in the PIAA semifinals on Monday at a site and time to be determined.

Boyles went the first six innings allowing one earned run on two hits and five walks while striking out nine, and Helsel finished off going an inning allowing a hit and a walk.

The unbeaten Dragons (25-0), the District 6 champions who have reached the PIAA semifinals for the second straight year, scored all the runs they needed in the first inning thanks to a two-run single by Helsel and an RBI base hit by Jeff Hoenstine.

Central added three more runs in the fourth to go ahead 6-0.

Griffin Snowberger had a two-run single, and Baron Dionis took home on a play that saw Snowberger caught trying to steal second.

After Fairview got a run in the fifth, the Dragon got the run back in the sixth when Kaden Fisher scored on an error.

The Tigers’ lone run in the fifth came on a double by Vinny Campoli.

Hoenstine was 2-for-4 with a run scored and an RBI for Central with Snowberger and Heisel each picking up a hit and a walk while driving in two runs each. Paxton Kling was 1-for-2 with two walks and two runs scored.

In addition to the Campoli double, Aiden Rubilotta and Aari Fox were both 1-for-3 with a walk for Fairview. Rubilotta’s hit was also a double.

Central will face District 9 champion Punxsutawney, a 6-4 winner over D10 runner-up Franklin, in the semifinals Monday. On the other side of the bracket, District 3 champion Lancaster Catholic beat District 4 champion Central Columbia, 5-3, and District 12 champion Neumann Goretti raced past District 2 champion Lake Lehman, 20-4, in five innings.

Chris Rossetti contributed to this story

Hipps Spectacular in Leading Clearfield SB into PIAA Semifinals; Karns City, Jburg Fall Powered by North Washington Rodeo
Aggressive Approach Pays Dividends as DCC Tops Rival West Greene in PIAA 1A Quarterfinals Powered by North Washington Rodeo
This website or its third-party tools process personal data.In case of sale of your personal information, you may opt out by using the link Do not sell my personal information.
×
Manage consent