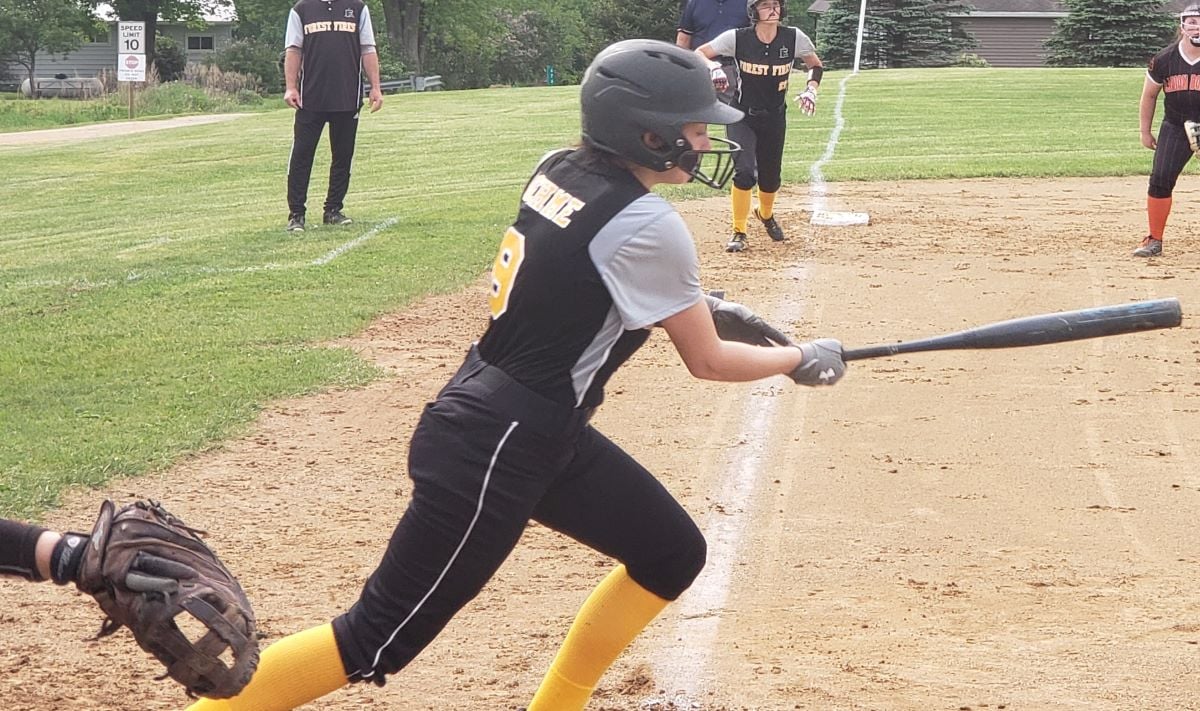 Maggie Boehme had a pair of hits in Forest Area's win over Otto-Eldred Wednesday. Photo by Chris Rossetti

KANE, Pa. – Forest Area softball is going dancing for the first time ever in District 9.

The third-seeded Fires advanced to the D9 Class 1A title game for the first time with a nail-biting 8-5 victory over second-seeded Otto-Eldred Wednesday afternoon in Kane.

Leading 8-4 going to the bottom of the seventh, Forest Area watched as Otto-Eldred got one run and then loaded the bases with just one out.

But Izzy Flick got Kate Rhinehart to pop up to shortstop Madison McFarland and Carrie Drummond to pop up to first baseman Emily Aites clinching the first D9 title-game appearance for any Forest Area team since West Forest made it to the D9 1A girls’ basketball title game in 2010.

The Fires, a co-op between West Forest, East Forest, and North Clarion, brought the bats against Otto-Eldred scoring five runs in the first two innings to set the tone early.

A pair of runs scored in the first on a Drummond error in center on a ball hit by Aites, and then Flick doubled to center to make it 3-0.

It was quickly 5-0 an inning later when Alexis Oswald and Madison McFarland had back-to-back RBI singles.

Otto-Eldred gt a run back in the bottom of the second on a Drummond double, and the Lady Terrors made it 5-2 in the third when Katie Sheeler tripled leading off the inning and scored on a wild pitch.

Aites, through, got both of those runs back on one swing of the bat in the fourth when she doubled to center scoring Oswald and Madison McFarland to make it 7-2.

The Lady Terrors didn’t go into the night quietly.

An error on centerfielder Emma McFarland on a ball hit by Bri Heller in the fifth made it 7-3, and Rhinehart followed with an RBI single to make it 7-4.

Maggie Boehme, though, pushed the Fires’ lead to- 8-4 with a two-out double in the sixth.

Forest Area will face two-time defending champion DuBois Central Catholic in the title game Monday at Heindl Field in DuBois. The Fires are trying to become the first KSAC team to win a 1A title since Keystone in 2013.

Otto-Eldred will take on Elk County Catholic in a consolation game at a time, date, and site to be announced. If Otto-Eldred beats ECC and Forest Area beat DuBois Central Catholic, then the Terrors would take on DCC in a true-second game for the second PIAA playoff berth.

BROCKWAY, Pa. – Using a three-run fifth inning to overcome a one-run deficit, two-time defending champion DuBois Central Catholic moved into the District 9 Class 1A title game with a 4-3 win over Elk County Catholic in the semifinals at Brockway.

“We have all been here, so we know what to expect,” Kayley Risser, who was named the Allegheny Grille of Foxburg Player of the Game after a 3-for-3 performance with a triple, an RBI, and a run scored, said. “It helps a lot.”

Risser was right in the middle of the Lady Cardinals’ fifth-inning rally putting down a perfect bunt single with no one out and a runner on first before coming around to score on an RBI ground out by Rose Whipple to give DCC a 3-2 lead.

In between the Risser bunt single and Whipple RBI groundout, DCC tied the game when Savannah Morelli’s fly ball to right field went off the glove of right fielder Hope Farley for a two-base error.

DCC then added a third run in the inning on a Madi Hoyt double to center to make it 4-2.

That three-run rally came after ECC had taken the lead with a pair of runs in the top of the fifth.

“We just battle right back, keep our heads down, and plow right through it,” Risser said.

“Coach Heigle warned us that they do like to battle back in the playoffs,” Risser said. “We definitely expected it.”

DCC struck first in the first inning when Kali Franklin singled with one out, stole second, and scored on a Risser single to center that was just out of the reach of Klawuhn, the shortstop.

Trailing 4-2, ECC got a run back in the top of the sixth when Reagan Bauer scored on an error on a ball hit by Sydney Alexander.

But with Alexander on second and just one out, Morgan Tyler struck out both Caitlyn Vollmer and Baron to end the threat and then retired the Lady Crusaders in order in the seventh to close out the victory.

Tyler got the win in relief of Melia Mitskavich going four innings allowing three unearned runs on three hits while striking out five.

Mitskavich pitched the first three innings scoreless allowing a walk and a hit batter while striking out five.

Hoyt added a 2-for-3 day with a double and an RBI for Lady Cardinals with Franklin going 1-for-3 with a walk and two runs scored.

Klawuhn was 1-for-3 with a walk and two RBIs for ECC.

DCC is in the title game for the third straight season, for the fifth time in the last six seasons, and for the sixth time in the last eight – of course, there was no season in 2020 because of the COVID-19 shutdown. The Lady Cardinals won D9 titles in 2014, 2016, 2017, 2019, and 2021, and will face Forest Area in the title game at a time to be announced at Heindl Field in DuBois.

ECC will take on Otto-Eldred in the consolation game at a site, time, date, and venue to be announced. If ECC beats Otto-Eldred and DCC beats Forest Area, then ECC would face Forest Area in a true-second place game for the second PIAA berth awarded to District 9.

Ratkovich, Kennedy Catholic Topple Cochranton; Maplewood Rallies Past Youngsville in D10 1A BB Quarterfinals
D9 2A SB Semifinals: Watson Drives in Six as Cranberry Advances; Peterson Tosses Shutout for Johnsonburg Powered by North Washington Rodeo
This website or its third-party tools process personal data.In case of sale of your personal information, you may opt out by using the link Do not sell my personal information.
×
Manage consent