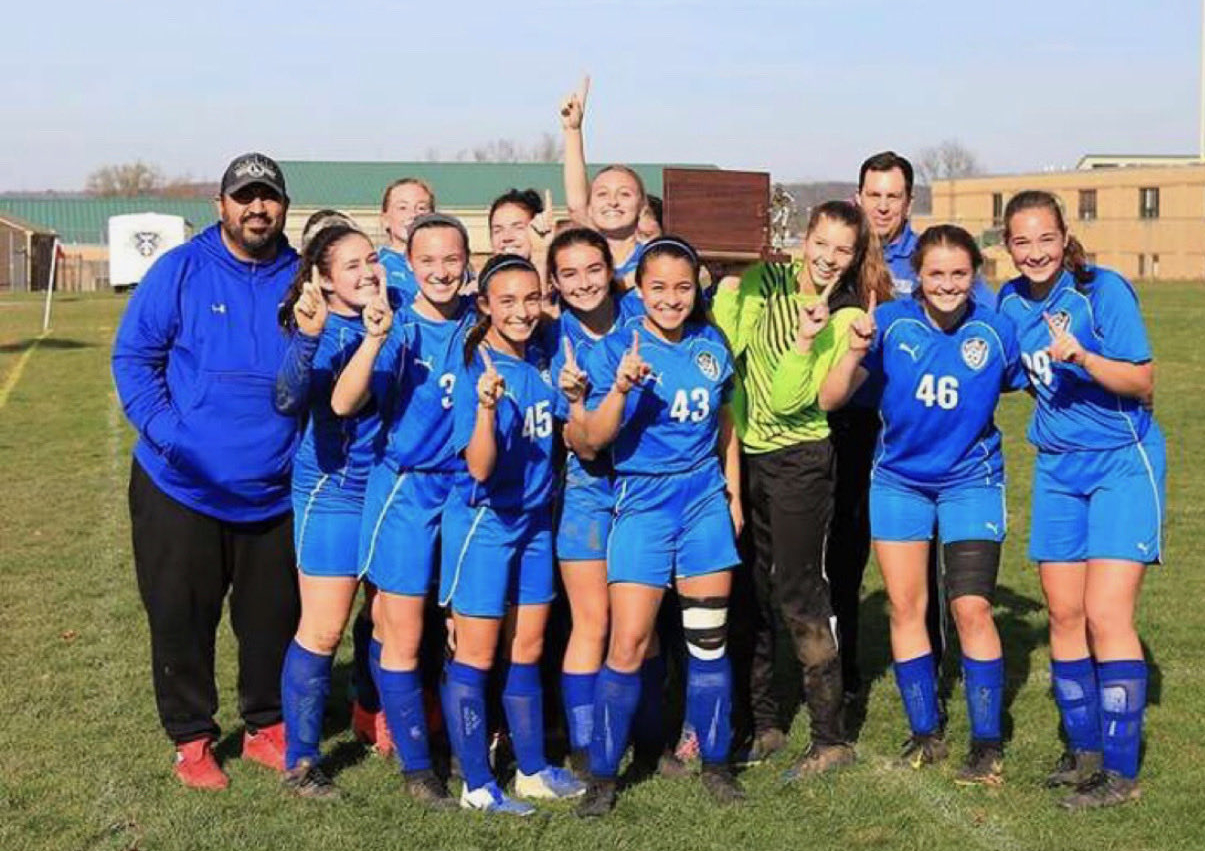 Winning a district title is a tremendous accomplishment – a school winning at least one in each season is an altogether different animal.

That’s exactly what the Cambridge Springs girls and Hickory boys did this season with each nabbing a D10 crown in the fall, winter, and spring.

The Cambridge Springs soccer team’s run began with a thrilling 1-0 win in penalty kicks (5-4) over Mercer in the D10 Class 1A semifinals, followed by a 3-1 win over Seneca for the D-10 crown. In the win over Mercer, Kylie Beck delivered the game-winner in PKs, and Maddie Yanc was terrific in net. The defense, led by Ella Worley, Finley Rauscher, Ava Greenwalt, and Nola Zook, was outstanding as well.

Their magical run continued in the PIAA playoffs, beating Redbank Valley 1-0 in double overtime before falling to a powerful Greensburg Central Catholic squad in the semifinals. In that double-overtime win, Ella Nicholson netted the game-winner off a throw-in from Makenzie Yanc.

It was another run for the ages in the fall, as the Blue Devils (18-4), under the direction of head coach Ryan McKissock, captured their first D10 crown in program history in Class 2A. The Blue Devils opened their playoff run with a 46-34 win over Cochranton in the quarterfinals, followed by a 48-38 win over Maplewood in the semifinals and a 51-36 win over perennial power West Middlesex in the title game.

During the season, the basketball squad was led by Maddie Yanc, who averaged 17.3 ppg. on her way to being named First Team All-District 10. Jordyn Wheeler, Hailee Rodgers, Makenzie Yanc, Finley Rausher and Elizabeth Kline also played key roles in the title run.

The softball team (17-3) wrapped up the terrific scholastic year by impressively winning the D10 Class 1A title with a 6-3 semifinal win over Cochranton, followed by a 6-2 in over Saegertown. The Blue Devils scored at least seven runs in 13 games on the season.

They came oh so close to advancing to the PIAA semifinals, beating Clarion-Limestone, 9-5 in the first round, followed by a heartbreaking 6-5 loss in the quarterfinals to West Greene in extra innings.

They were led on the season by the stellar pitching of Hailee Rodgers, and the offensive prowess of Paige Verbanac, Kylee Miller, Aly Acosta-Reyes, Taylor Smith,  Chloe Schultz and Myranda Findlay, among others.

Moving over to Hickory, their dominant scholastic campaign began in football, when they swept Grove City, Sharon, and Slippery Rock in the regular season, followed by dominant wins over the Rockets (51-0) and Eagles (42-29) in the D10 Class 3A semifinals and finals, respectively.

The Hornets were an offensive juggernaut, led by senior quarterback Michael Henwood, the D9and10Sports.com Offensive Player of the Year. Henwood threw for 2,130 yards, rushed for 943 and accounted for 34 total touchdowns. He also had big-play receivers in Ramarion Whitehead and Matt Cannone, and a feature back in Clay Wiesen.

Defensively, the Hornets were led by Rocco Iacino and Jackson Pryts, who both amassed over 100 tackles.

Their dominant run continued into the winter, where they came within one possession of winning a Class 4A state championship.

First, they had to get through a highly competitive Region 4, where they grinded out playoff wins over Fort LeBoeuf (44-33 in quarterfinals), Warren (45-34 in semifinals), and Harbor Creek (39-34 in the title game).

They were far from done, however, as Peyton Mele drilled a 3-pointer at the buzzer to lift them to a shocking win over Greater Johnstown in the PIAA quarterfinals, followed by a 68-61 win over Lincoln Park in the semifinals, before falling by a single point, 41-40 to Allentown Central Catholic in the title game, a contest in which they rallied from an 18-point deficit.

Moving onto the spring, it was the baseball team’s turn.

The Hornets were impressive in a 7-3 quarterfinal win over North East, followed by a 14-3 drubbing of Franklin in the semifinals.

In the championship game, they earned a thrilling 4-3 win over Mercyhurst Prep, Nick Osborne gutted out a complete-game victory, and Johnny Leedham delivered the big blow offensively, a 3-run triple in the third inning.

The Hornets beat McGuffey 4-2 in the first round of the PIAA playoffs before falling to Central (Martinsburg) in the quarterfinals, 9-4.

Leedham, Joey Fazzone, Luca Bertolasio, and Clay Wiesen all had an OPS of over 1.000, while Connor Evans was at .970.

Fazzone was a part of all three championship teams.