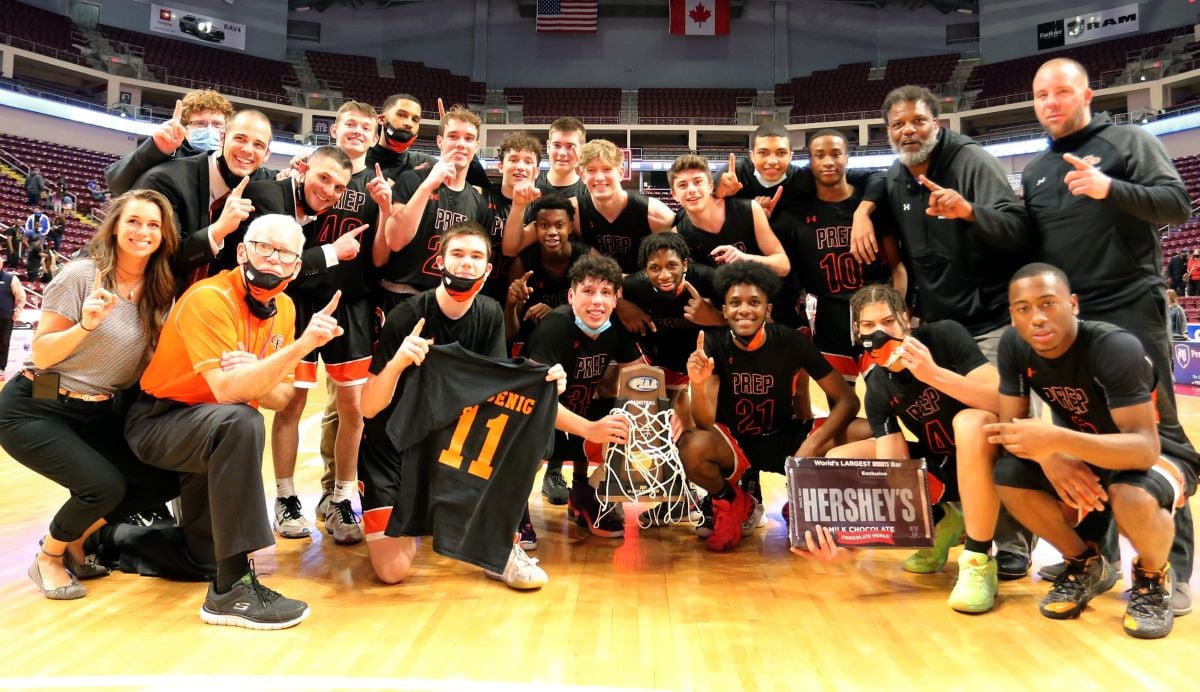 No. 1: A Championship Out of Nowhere

When the 2021 basketball postseason started, no one was talking about Cathedral Prep.

The Ramblers weren’t even the top seed in a TWO team tournament in District 10, and for good reason having lost to top-seeded Meadville not once but twice by double digits during a regular season (53-35 and 63-51) that saw Prep finish 15-6 while going 4-5 down the stretch including losses in three of its final four regular-season games.

So coming off a 49-41 home loss to Erie High School with a trip to Meadville, where they had lost by 19 Jan. 26, almost everyone outside of the Ramblers locker room figured it was going to be a short postseason.

But the kids from Erie had other ideas.

The March 10 D10 title game was a blowout. Just not the one everyone was expecting.

Allowing just five first-half points, Cathedral Prep rolled out to a 22-5 halftime lead on its way to a 52-36 win for the district title.

In what would become a recurring theme, sophomore Khali Horton led the charge with 18 points with senior Liam Galla adding 11.

Next up was another road game, this time at District 6-9 champion DuBois.

While the Ramblers were favored, the game was tight through the first half with Prep holding a 19-17 lead at halftime.

Another road game was on tap. This time at heavily favored WPIAL champion New Castle.

The Hurricanes entered the game at 21-2 and were coming off a 61-45 win over Chartiers Valley in the WPIAL title game avenging one of the two regular-season defeats.

Again, no one outside the Ramblers’ locker room gave them a puncher’s chance against a team averaging over 70 points a game.

And again Prep showed that championships aren’t won on paper.

Down seven in the late in the fourth quarter, 44-37 with 1:30 to play, a 7-0 run was capped by a Galla basket with about four seconds left after Will Inness had scored the first five points of the run.

Then in overtime, the game went back-and-forth with three ties, the last at 50 apiece. An Inness free throw following an intentional foul made it 51-50 Prep before another free throw by Galla made it 52-50.

New Castle, thanks to Prep making just 2 of 6 free-throw after the game was tied at 50, had a chance to tie or win the game at the end, but Isaiah Boice missed a 3-pointer before Mike Wells missed a shot. Mike Graham got the rebound and put it back in, but the shot came after the horn leaving the Ramblers with the stunning, 52-50, overtime upset.

Up next, a trip to Greensburg, Pa., and Hempfield High School where Cathedral Prep met District 3 champion, Lower Dauphin.

All that was at stake was a trip to the state championship game for the first time in 25 years.

A fast start – Prep used a 19-6 first-half run to build a 21-10 lead less than three minutes into the second quarter, helped make that dream a reality.

Horton, who else, led the way again with 16 points with Galla adding 11 points, including his 1,000th career point.

In the state title game for the first time since 1996 – that season Prep lost by five to a Lower Merion squad led by some guy named Kobe Bryant – the Ramblers faced off against Archbishop Ryan out of the always powerful Philadelphia Catholic League (District 12).

Again, not much of a chance was given to the guys in black and orange.

Again, they said who cares?

A 15-4 second-quarter domination increased the advantage to 30-14 by halftime with Horton outsourcing Archbishop Ryan all by himself, 15-14.

Again, it was the sophomore Horton leading the way with an amazing game. He scored 25 points, grabbed eight rebounds, and blocked two shots.

The two seniors – Innes and Galla – made sure they went out champions adding 14 and 12 points respectively.

At the end of the season, the awards rolled in.

To top it all off, the team received the royal treatment in Erie with a community celebration at the Millcreek Mall.

Top 25 Countdown No. 2: Nearly Perfect Clarion Wins Second PIAA Volleyball Crown
2021-22 Player Profile: Anthony Bonanni Powered by Potter County Family Campground
This website or its third-party tools process personal data.In case of sale of your personal information, you may opt out by using the link Do not sell my personal information.
×
Manage consent