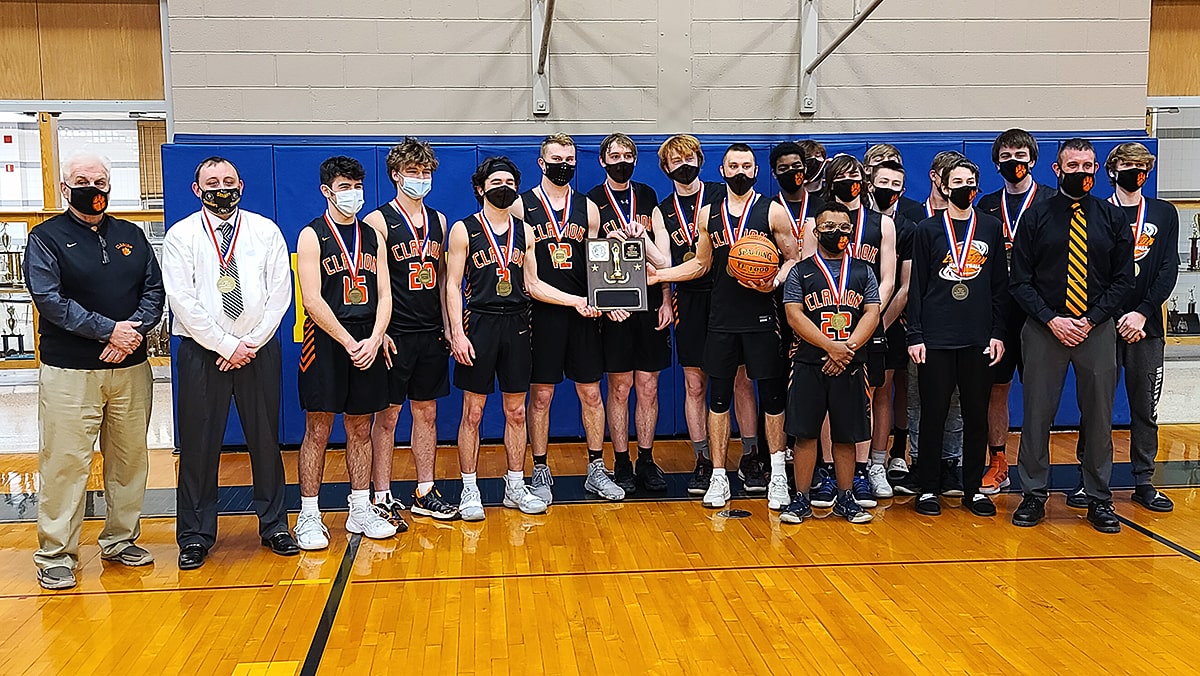 Sure, the Bobcats had made a Cinderella-like run to the 2A title game the year before being ousted by Ridgway in the title game before moving down to Class 1A for the 2021 season.

In fact, besides German, the only other returning player to have averaged at least five points per game was Hunter Craddock (7.6 ppg).

And when Clarion lost four in a row in late February to fall to 11-8 on the year, things weren’t looking championship-like.

In fact, the Bobcats entered the D9 postseason at just 13-9 and seeded fourth in the bracket.

An easy win over A-C Valley, 78-58, in the opening round sent Clarion on the road to top-seeded and heavily favored Elk County Catholic.

The Crusaders rarely lose on their home court having dropped just three home games since the 2014 season heading into the semifinals and just 21 since the start of the 2001 campaign.

But the Bobcats jumped out to an early 7-0 lead and never relinquished the advantage.

ECC fought hard and trailed by just one, 41-40, early in the fourth. But Clarion kept hitting free throws and beat the Crusaders, 55-49, behind 17 from German and 14 from Beau Verdill.

It was another road trip in the championship game to another hard gym to play in – Johnsonburg.

And it was another battle royale.

Clarion led 25-19 at halftime only to see Johnsonburg go on an 18-8 run in the third quarter to take a 37-33 lead into the final eight minutes.

The dream for Clarion, which was looking for its first hoops title since 2003, seemed over.

But the Bobcats didn’t quit.

But the usually reliable German, who entered the game shooting 90.1 percent from the line, missed four straight free throws allowing Johnsonburg to tie the game at 41 on an Eric Christoff 3-pointer with 41 seconds left.

But two missed free throws by Verdill following a five-second call on Johnsonburg, opened the door for Ethan Wells to tie the game on two Ethan Wells free throws with 13 seconds left.

The Bobcats then came down the court, and Ethan Burford found Craddock open under the hoop as time was expiring. Craddock was fouled on the play and went to the line with 0.6 of a second left and the game tied.

The usually sporadic (57.3 percent) free-throw shooter proceeded to hit both charity shots to give Clarion the title, 58-56.

The win meant a home quarterfinal game in the PIAA playoffs under the COVID-19 forced champions-only PIAA tournament.

Clarion then moved into the PIAA semifinals for the first time since 1966 with a 61-54 win over Bishop Carroll.

Clarion’s season ended in the semifinals with a 78-52 loss to Berlin Brothersvalley, but it was a heck of a ride the Bobcats took their fans on in 2021.

Top 25 Countdown No. 25: Beighley, Orton Set School Career Scoring Marks
Top 25 Countdown No. 23: Cambridge Springs Girls, Hickory Boys Win D10 Titles in Fall, Winter and Spring Seasons
This website or its third-party tools process personal data.In case of sale of your personal information, you may opt out by using the link Do not sell my personal information.
×
Manage consent