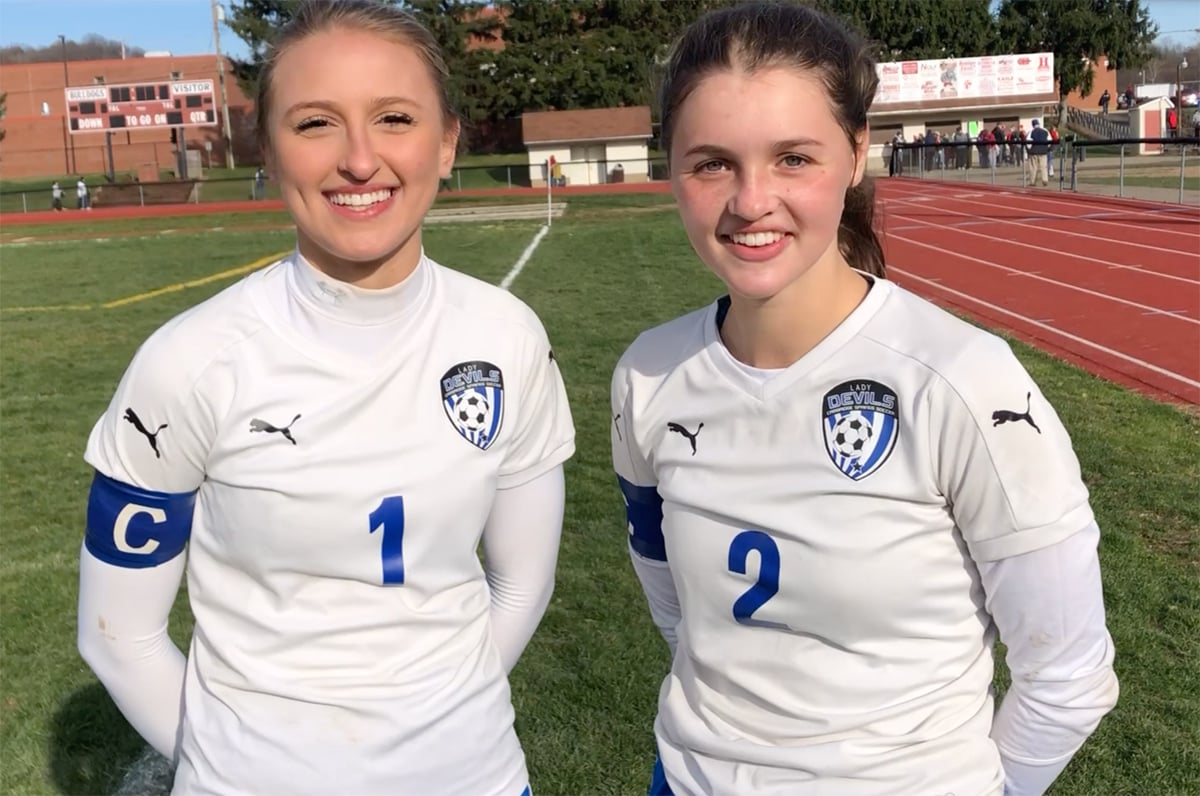 Cambridge Springs' Ella Nicholson (1) scored the game's lone goal in the second overtime in Saturday's win at Redbank Valley. The goal came off a throw-in from Mackenzie Yanc (2).

Bristow finally got what he wanted when one of Mackenzie Yanc’s strong throw-ins from the sideline of Redbank Valley’s small football field soccer layout bounced into the goalie box and through some traffic to the right foot of Ella Nicholson.

Nicholson chipped it into the air and into the left corner of the goal over Redbank Valley goalie Gabby Dinger to end the game at 1-0 at the 6:28 mark of the second 15-minute overtime period at Redbank Valley High School in their PIAA Class 1A quarterfinal game Saturday afternoon.

“I was trying to get it over to the back post the whole game, so my (teammates) could get a chance to get their body in front of it so it wouldn’t be short,” Yanc said. “I saw Ella there and just threw it.”

Listen to Nicholson and Yanc talk about Saturday’s win.

Nicholson, who missed from point-blank range with 3:20 left the first half, chipping a shot over the cross bar of an open net, didn’t waste this chance.

“When (Mackenzie) had thrown it, I saw it go over everybody’s heads, all of my teammates and then the defense, so I said to myself ‘I have to go now or it’s not going to go in,’” Nicholson said. “So I ran on to it and just met it and when I was hit it I was freaking out, ‘Please go in.’ and it curled just right, so I was happy.”

Bristow said he was glad his team was able to execute the winning play and deal with a team with a deeper roster.

“We had multiple opportunities with (the throw-in) today and it finally paid off,” Bristow said. “It really felt like as the game progressed, we had more and more possession of the ball. Redbank had excellent counter attacks and are very athletic and fast. We were able to get the ball down field, but we felt as long as we didn’t let them get behind us, we would have some scoring chances.

“Their keeper made some great saves in the second half and overtime and it was starting to feel that nobody was really going to get that hard shot at goal away from the keeper. Fortunately, we were able to get it off that throw-in.”

“Two years we were in last place in our league and to make this turnaround has been just awesome,” Bristow said. “And I have to give Redbank Valley credit. They played very hard and you can tell why, I wasn’t sure, but here is why that team was 16-3, a strong team.”