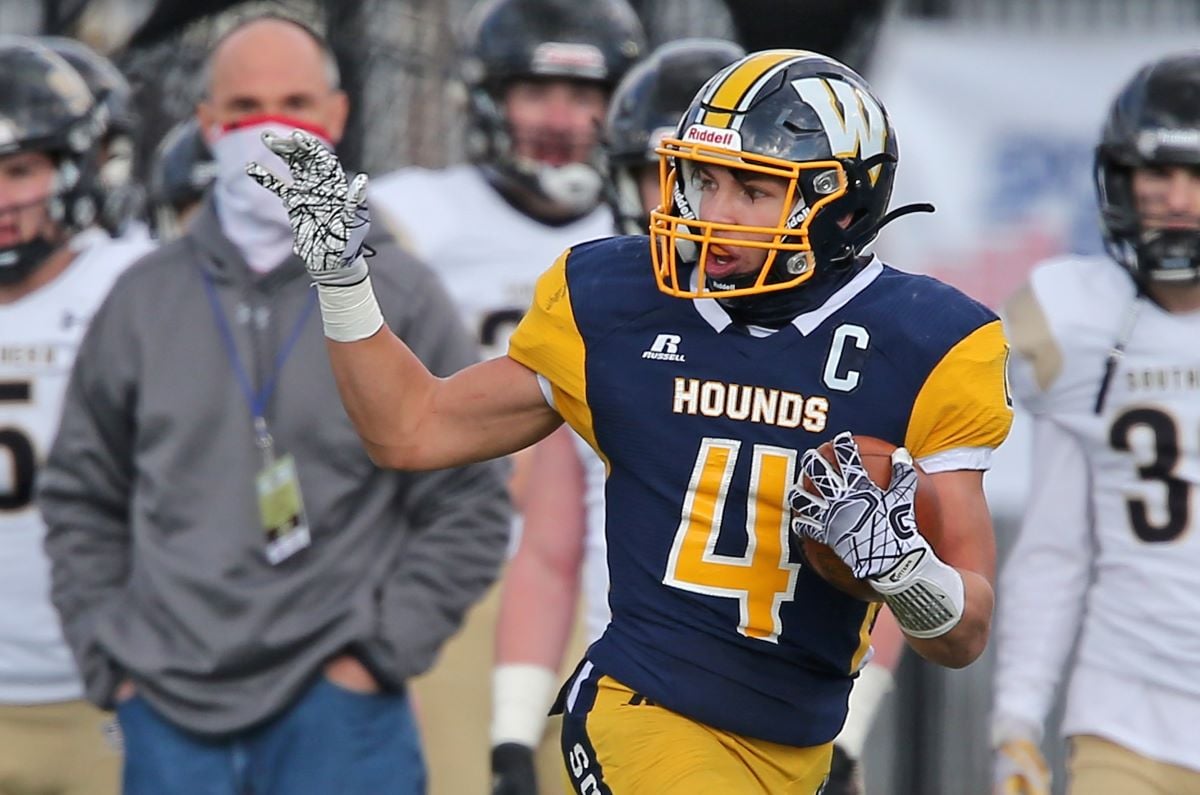 Ethan Susen of Wilmington streaks down the sideline during the PIAA championship game. Photo by Paul Burdick. Check out more of Burdick's work here

WARREN, Pa. – The Wilmington Greyhounds earned their third trip to the PIAA Class 2A championship game in the last four seasons in 2020.

Senior Ethan Susen was one of the major reasons why earning the 2020 Jim Kelly Award as D9and10Sports.com District 10 Player of the Year Award presented by the Allegheny Grille of Foxburg. This is the inaugural season for the awards on D9and10Sports.com.

On the offensive side of the ball, Susen was a force. Running behind a dominant offensive line, Susen amassed 1,443 yards on 162 carries scoring 13 touchdowns on the ground.

He was also a major threat in the receiving game with 14 receptions for 326 yards and four touchdowns.

On defense, Susen intercepted four passes (tied for third-best in District 10) and was one of the top tacklers on a Greyhound defense that allowed just 16.1 ppg.

Susen also was awarded the Individual Performance of the Year for his efforts against Chestnut Ridge in the PIAA quarterfinals.

Defense: 4 interceptions, finished as one of the top tacklers on a stout Wilmington defense

A true dual-threat quarterback, Henwood put together a special senior season in helping lead the Hornets to the District 10 Class 3A title. He completed 136-of-222 passes (61.3 percent) for 2,118 yards, 21 touchdowns and 11 interceptions. He also rushed for 942 yards and an additional 13 touchdowns, with an average of 11.0 ypc.

Photo by Mike Schelle and courtesy of Leary Studio

Kiefer was the top tackler for an Oiler defense that pitched four consecutive shutouts, including a D-10 Class 4A semifinal win over Conneaut. The senior linebacker amassed 93 tackles, including seven for loss, as well as five sacks.

This award could have gone to any one of Wilmington’s lineman, as they were one of the top units not just in District 10, but in the entire state as well. Phanco was a big reason why from his guard position, helping lead a Greyhound team that rushed for an average of an astounding 345.8 ypg. The Greyhounds also threw for 65.8 yards per contest.

The Oiler senior was a force on both sides of the line in helping lead his team to the PIAA semifinals. Defensively, he amassed 72 tackles, 13 of which went for a loss, as well as eight sacks and a  pair of forced fumbles.

It’s not easy to break onto the field as a freshman at a program like Grove City, but Lutz did just that as both a receiver and defensive back. He caught 23 passes for 202 yards and a touchdown and amassed 28 tackles and an interception on defense for an Eagle team that advanced to the D-10 Class 3A title game.

Phillian guided the Greyhounds to the PIAA Class 2A championship game for the second time in his three seasons as head coach in 2020. The Greyhounds finished with a record of 10-1, beating Farrell for the D-10 title, as well as wins over Chestnut Ridge and at Beaver Falls to reach the title game.

Head coach Jim Penley has a tremendous coaching staff at EHS, including O’Brien, who was instrumental in helping the Knights to an unbeaten 7-0 regular season. Ike went on to beat West Middlesex in the 1A semifinals before falling to Reynolds in the D-10 championship game.

In seven games this fall, Runser had 12 extra points and five field goals, including a clutch overtime field goal in Week 1 against Maplewood, a 20-yarder that lifted the Wildcats to a 17-14 victory. He also handled kickoff duties for the Wildcats as well, recording five touchbacks.

Vs. Chestnut Ridge in PIAA Class 2A quarterfinals, in a 56-29 win, Susen put together one of the most remarkable rushing performances you will ever see. He carried the ball 30 times for 327 yards, an average of 10.9 yards per carry, with six of Wilmington’s eight touchdowns. He also caught two passes for 30 yards.

In the District 10 Class 1A semifinal, Eisenhower and West Middlesex battled to a 7-7 tie through regulation. Both defenses, which had been stifling through four quarters, yielded in overtime. Big Reds quarterback Ty Tate hooked up with Chris Smith on both a 10-yard touchdown and the 2-point conversion to give WM the lead. Ike running back Cael Black answered with a 9-yard touchdown run and quarterback Owen Trumbull leapt over the line for the conversion. In the second overtime, Trumbull ran it in from five yards out and Jake Venman connected on the point after for a 22-15 lead.

Big Reds running back Colby Johnson ran in from five yards to cut the lead to 22-21. The Knights thought they had the win on an incompletion in the end zone, but a defensive pass interference penalty gave WM another shot. Tate handed the ball to Ian Smith on a straight dive. The Knights defensive line came up with its biggest stop of the season to keep Smith from crossing the goal line and securing a berth in the D-10 title game.

When one thinks of Mercer County sports, one immediately thinks of Greenburg. The long-time radio personality has been working for 34 years promoting athletes in the county and around the state getting his start at WWIZ-FM before joining WPIC in 1999. Greenburg, a Hickory High School and Clarion Univerity graduate, is the de facto keeper of the Mercer County record books and is active on social media – particularly Twitter – promoting the athletes and their accomplishments. He has gone above and beyond the normal sports media person in promoting athletes both during the high school careers and after into college and the professional ranks, and the love the athletes have for him is easy to see in their interactions. Greenburg has also co-hosted a Monday night sports talk show for 32 years with Hugh Ringer and is a member of the Mercer County Hall of Fame board.

Bob Greenburg at this season’s PIAA Class 2A championship game between Wilmington and Southern Columbia. Photo courtesy of Ryan Briggs

Kelly’s is most known as Hall of Fame quarterback of the Buffalo Bills who grew up in East Brady, Pa. and went to Miami (Fla). Kelly was inducted into the Pro Football Hall of Fame in 2002 after passing for over 45,000 yards as a pro, including two seasons in the USFL, with 320 career touchdown passes. He led the Bills to four straight AFC Titles.

Wilmington’s Chimiak, Vass-Gal Named To Pennsylvania MaxPreps All-State Football Second Team
Jim Kelly D9and10Sports District 9 Football Awards Powered by Allegheny Grille of Foxburg Chosen; All-District Team Named
We use cookies on our website to give you the most relevant experience by remembering your preferences and repeat visits. By clicking “Accept All”, you consent to the use of ALL the cookies. However, you may visit "Cookie Settings" to provide a controlled consent.
Cookie SettingsAccept All
Manage consent