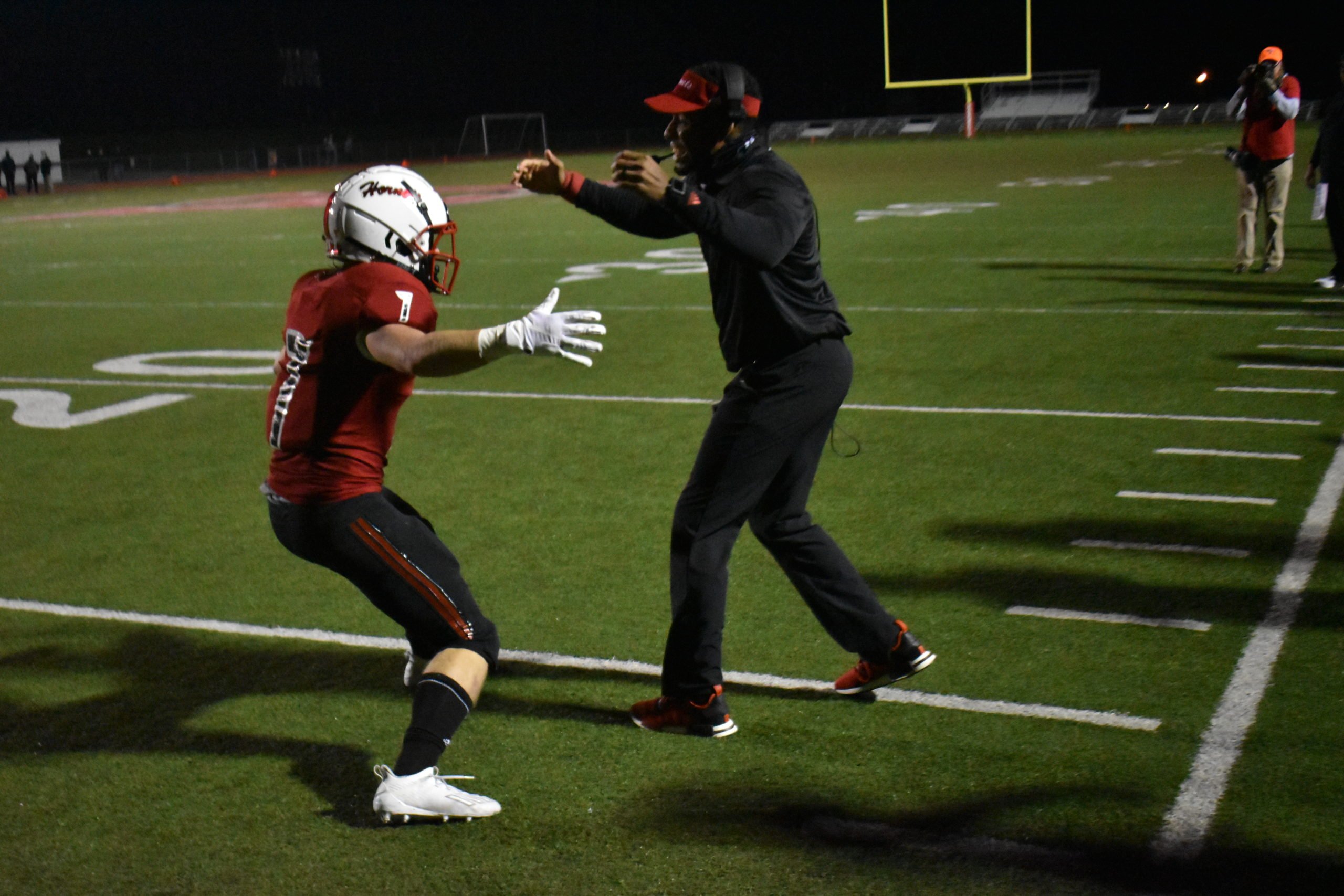 HERMITAGE, Pa. – The third time equaled a championship for Hickory.

The Hornets knocked off Grove City for a third time this season to win the District 10 Class 3A championship on Saturday, exacting a measure of revenge in the process after the Eagles beat them in the D-10 semifinals a season ago.

“It’s a great feeling,” said junior Ramarion Whitehead. “D-10 is something you want to get to. This is a great group of guys here, a great senior group. Everybody works together. We had one goal – we wanted to go undefeated, win D-10 and we’re making it happen. Proud of the seniors, proud of the underclassman, the scout team players. Everybody plays a part.”

And, according to head coach Bill Dungee, there’s a reason for that.

“When your best players are your hardest working and most dedicated, you want the world for them,” Dungee said. “That’s what I have in these young men. I tell my wife all the time I can’t believe it, whatever I ask them to do, they do it wholeheartedly and they lead the young guys.”

Like the first two meetings, Hickory (8-0) jumped on Grove City early, led by Henwood, who went 54 yards on the second play from scrimmage for a touchdown.

The Eagles (4-4) actually outgained the Hornets, 428-401, but Hickory made the big plays when they needed to.

That included Beatty intercepting a Logan Breese pass, leading to Iacino’s first score, an 8-yarder early in the second quarter that made it 14-0.

Breese’s next pass attempt was also intercepted, this time by Whitehead, who returned it to the GC 6, which set up Iacino’s second touchdown.

“He ran a slant  and I jumped it and got blocks out in front of me,” Whitehead said. “Michael Trinchese had a good black, Matty Cannone had a good block, and we were able to set up a touchdown.”

It marked the third time in as many games that the Hornets jumped out to a three-touchdown lead on the Eagles.

“That’s our number one thing is we want to start fast,” Dungee said. “Our mantra is fast and physical and that’s how we treat the game. We always want to throw the first punch.”

The opportunistic plays kept coming for Hickory after a Curtis Hovis touchdown run got the Eagles on the board at 21-7 with 4:28 to go in the first half.

Beatty, the punter, took off deep in his own territory on a 4th-and-10 punting situation on the ensuing possession after a high snap. He picked up the first down, and, as was the trend throughout the game, the Hornets took advantage of the opportunity.

A 31-yard pass to Clay Wiesen set up Iacino’s third touchdown of the half, a 3-yard pass from Henwood with just five seconds left in the half to make it 28-7.

He did so, picking up a first down, which ultimately led to a Henwood 3-yard touchdown pass to Iacino.

“Grove City, we knew they would come out and make adjustments,” Dungee said. “Our defense hasn’t given up close to that many points all year. Grove City made some plays, but we made some plays when we needed to and our offense was able to capitalize. That’s big. Sometimes it goes like that, you just have to make plays when they’re given to you.”

Grove City’s Curtis Hovis was a workhorse, carrying 31 times for 153 yards, including eight times on the opening drive of the second half, which chewed up nearly six minutes and was capped by a Breese to Zack Martin 4-yard TD pass to make it 28-13.

Hickory counter-punched, however, and it turned out to be the knockout blow.

The ensuing drive started with a 20-yard run from Wiesen and ended like so many drives have for the Hornets this season, with Henwood hooking up with Whitehead. The 17-yard scoring strike made it 35-13 with 2:04 to go in the third.

“I had one on one coverage, and coach was like ‘just put the game away now,’” Whitehead said. “He called a route for me, Mike Hen threw a perfect ball and we sealed the game.”

There was a flurry of scores late in the game – all in the final two minutes to be exact.

Anthony Nemec scored on a 4-yard run, which prompted an onside kick attempt that was recovered by Pryts.

Two plays later, Henwood was in the end zone again, this time from 50 yards out and the celebration was on for the Hornets.

The Eagles scored in the game’s final moments, a 5-yard pass from Breese to Anthony Pereira.

For Hickory, it’s their first District 10 title since 2016, and it came against their Mercer County rival.

Dungee made it clear afterward just how much respect he has for the Eagles.

“It was very sweet,” Dungee said. “Obviously I have a ton of respect for coach Sam Mowrey and that program. They were getting healthy so that’s scary. It’s very gratifying. It’s funny how life works. That was part of my pregame speech. You were eliminated by them last year and to have an opportunity to win a District 10 championship against a team that eliminated you.”

The Hornets move on to play Bedford in the PIAA quarterfinals next week, but they’re going to enjoy the championship first.

“We’ll enjoy it tonight, Dungee said. “To be honest I didn’t even look. I didn’t even know who was on the other side. Grove City was our focus.”

Oil City Defense Stops 2-Point Conversion, as Oilers Survive and Advance in PIAA 4A First Round
First-timer: Defense sparks Bulldogs in 28-15 win over Northern Bedford
This website or its third-party tools process personal data.In case of sale of your personal information, you may opt out by using the link Do not sell my personal information.
×
Manage consent