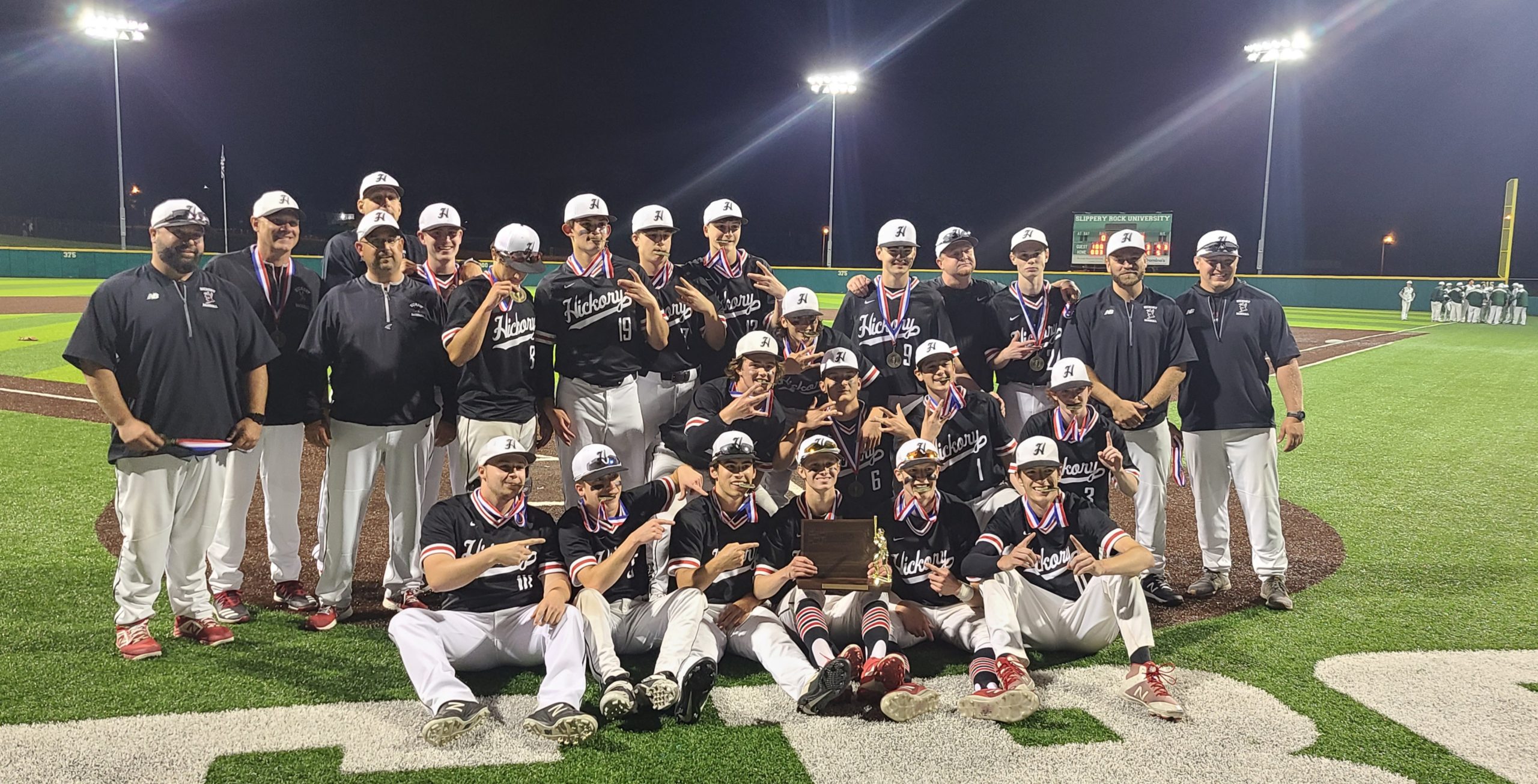 SLIPPERY ROCK, Pa. – Nick Osborne was clutch, and as a result, Hickory was golden.

Osborne gutted out a complete game victory, escaping a bases-loaded jam in the seventh inning to do so in a 4-3 win over Mercyhurst Prep in the District 10 Class 3A title game on Monday at Slippery Rock University.

With the bases full of Lakers and two outs, Osborne started down the barrel at Jake Manendo. He promptly induced a groundout to end the game, and the celebration was on for the Hornets.

“You have to take it one pitch at a time,” Osborne said. “You just have to make one pitch. That’s all it takes is one pitch, whether it’s a ground ball, flyball, strikeout, it only takes one pitch to win a title.”

It was one of two bases-loaded jams Osborne faced over the final two innings. A one-out single off the bat of Connor Fitzgerald deflected off Osborne’s foot in the sixth, making it a 4-3 game. For the second time in the inning, the trainer came out to have a look at Osborne. The senior gutted it out and got a line-drive double play to get out of the inning.

“I’m a little sore, but I’ll be alright,” Osborne said. “I’ll ice it tonight and get back at it tomorrow.”

It was Mercyhurst Prep that took the lead early, as Hayden Zaffino’s RBI triple brought in Zach Danias in the first inning.

That held until the third when Johnny Leedham stepped to the plate with the bases loaded and one. The sophomore ripped a ball into the left-centerfield gap off Zaffino, plating Luca Bertolasio, Clay Wiesen, and Joey Fazzone, giving the Hornets a lead they wouldn’t relinquish.

“He left that hanging slider, I saw it and I drove it,” Leedham said. “We really wanted to win it. We hadn’t won (a District 10 title) in so long. We just really wanted it bad.”

Fitzgerald came on in relief of Zaffino in the fourth inning, which saw Wiesen’s RBI groundout make it 4-2 (the Lakers scored on a fielder’s choice in the top half of the inning), plating Connor Evans, who had singled.

That run proved to be pivotal, and ultimately the game-winner.

The win gives the Hornets District 10 titles in football, boys basketball and now baseball in the same scholastic year.

Osborne fanned eight in the win.

“I think my location was really good tonight,” Osborne said. “My slider was working really well. I was able to use my slider and my changeup to set up my fastball.”

Leedham’s two hits paced the Hornets, while Evans, Bertolasio, and Wiesen all had knocks as well.

Mercyhurst Prep actually collected nine hits, with Manendo and Fitzgerald leading the way with two each.

Up next for Hickory is a date with the WPIAL third-place team on Monday, June 7.

“I don’t even know if I can describe what I’m feeling right now,” Osborne said. “It’s a mixture of emotions. I’m so overwhelmed with happiness right now.”