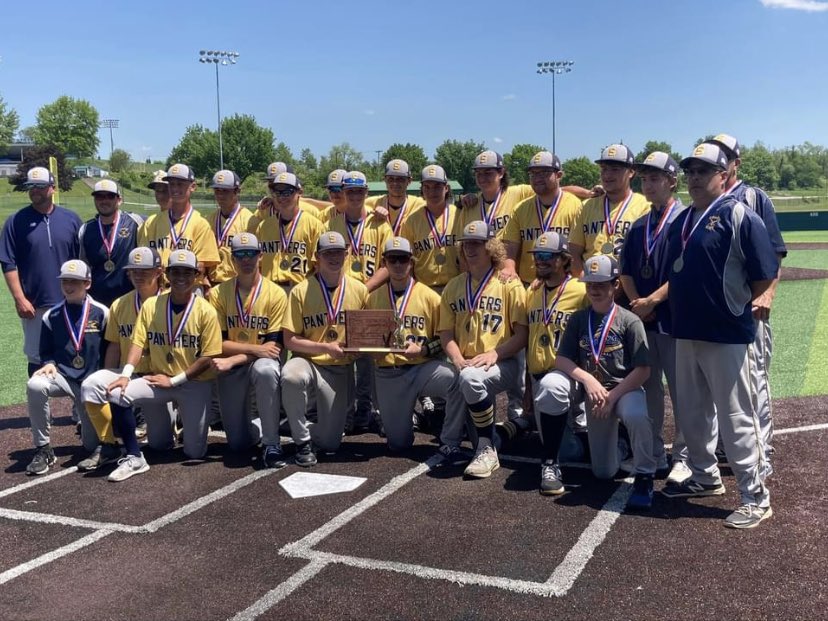 SLIPPERY ROCK, Pa. – Henry Shaffer had a monster day to help lift top-seed Saegertown to the District 10 Class 1A baseball title with an 11-1, five-inning win over No. 6 seed and defending champion Kennedy Catholic.

Shaffer had three extra-base hits (two doubles, triple) and three RBIs and also got the complete-game victory on the mound.

Kennedy Catholic actually took a 1-0 lead in the top of the first on an error on a fly ball off the bat of Remington Hart, but that lead was short-lived.

With one out in the bottom of the first, Landon Caldwell tripled and scored when Shaffer followed with a triple of his own to tie the game. Dylan Flinchbaugh’s fly ball was unable to be fielded cleanly, allowing another run to cross the plate, which was followed by an RBI double from Zach Balog and an RBI single from Joe Grundy and the Panthers were well on their way against KC starter Dominick Rakovich.

The Panthers scored three more runs in the third on Garrett Young’s RBI single and a two-run single off the bat of Anthony Hernandez.

Saegertown ended the game with the 10-run rule, scoring four more runs in the fifth – all with two outs. Wyatt Burchill’s RBI single scored Joe Grundy, who walked, which was followed by a walk to Caldwell, a two-run double off the bat of Shaffer, and an RBI single by Flinchbaugh to end it.

In addition to Shaffer, Burchill, Flnichbaugh, and Balog had two hits each for the Panthers, with every starter in the lineup collecting at least one hit. Caldwell and Balog scored two runs each.

Shaffer allowed just three hits and one walk, striking out eight. He threw 46 of his 68 pitches for strikes.

Saegertown advances to play the loser of the WPIAL championship game between Eden Christian and Union-New Castle (that game will be played on Wednesday, June 1) on Monday, June 6 in the first round of the PIAA playoffs.

Saegertown Outlasts Cochranton for D10 1A Softball Championship Powered by North Washington Rodeo
Fairview Gets Hard-Fought Win Over Franklin for D10 3A Baseball Gold Powered by North Washington Rodeo
This website or its third-party tools process personal data.In case of sale of your personal information, you may opt out by using the link Do not sell my personal information.
×
Manage consent