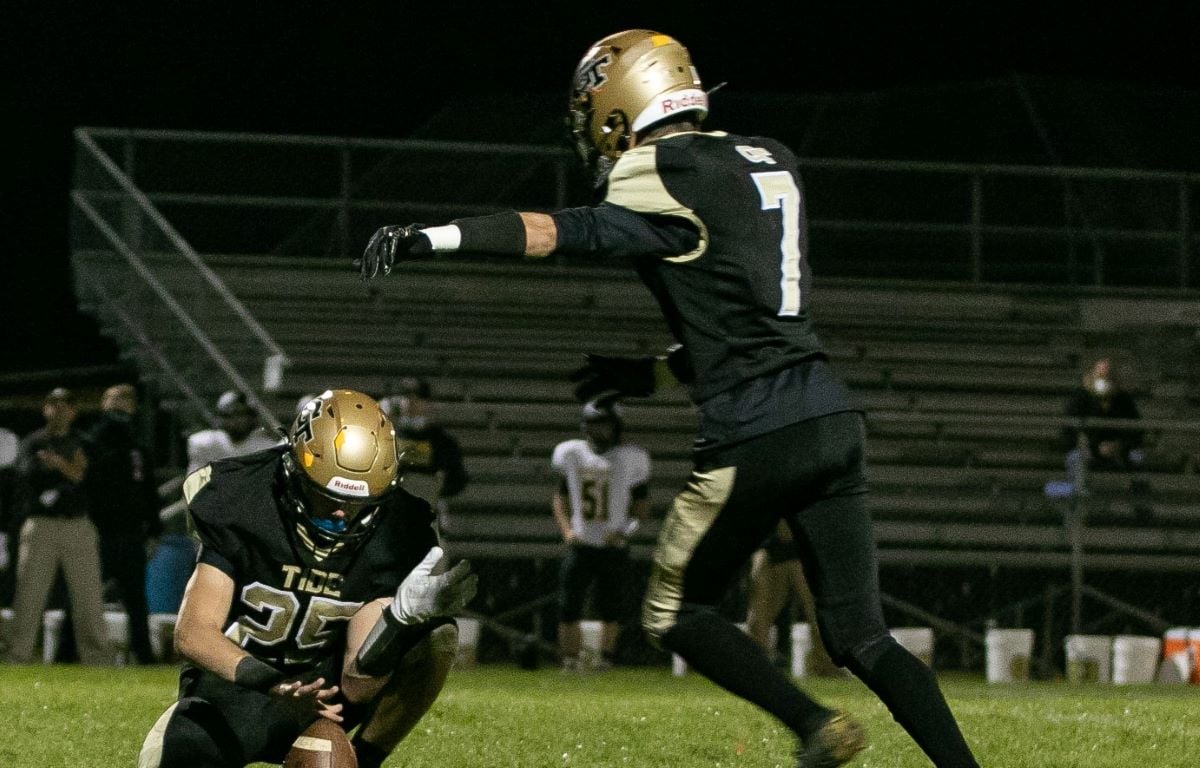 The game saw five second-half lead changes and one tie before Mullins, who just over two minutes earlier had a potential go-ahead extra point blocked, was able to win it with his second field goal of the night.

But a 5-yard Dan McGarry to Ty Terry touchdown pass with 2:45 left tied the game at 29 with the extra point being blocked.

Curwensville then got the ball back with just over 29 seconds left, and McGarry, who was 18 of 32 for 294 yards, four touchdowns, and two interceptions, completed a 41-yard pass to set up Mullins’ game-winning kick.

The game-winning kick by Ty Terry
Golden Tide pull it out for the win
32-29 @WTAJnews pic.twitter.com/O5kg0e1Wud

Terry caught eight passes for 167 yards and was a big reason Curwensville was able to throw for 222 yards after halftime and rally from a 15-6 deficit in the first half and a 15-9 halftime deficit.

His 70-yard grab off a McGarry pass just under five minutes into the second half gave the Golden Tide their first lead of the game, 16-15, and started the see-saw scoring of the second 24 minutes.

Glendale (2-2) took the lead back going to the fourth quarter, 21-16, thanks to a Zeke Dubler 7-yard run before Mullins caught a 10-yard pass from McGarry and then hit the extra point 1:50 into the fourth quarter to put Curwensville back ahead, 23-21.

The brothers each scored in the first half to give the Vikings a 15-6 lead with 2:03 to play in the half before Mullins booted a 36-yard field late in the half to make it 15-9 at the break.

STRATTANVILLE, Pa. – Charlie Krug completed 17 of 21 passes for 246 yards and threw three touchdowns, two to Brayden Kunselman and one to Noah Peterson as Brookville ran away from Central Clarion for a 40-14 win.

The Raiders (4-0) scored three times within a span of just over three minutes in the second quarter to build a 33-0 lead. Krug hooked up with Kunselman for the Raiders’ first points in the first quarter on a 40-yarder, then his 52-yarder to Peterson put it at 33-0 with just 41 seconds left before halftime.

In between those two TDs, Tate Lindermuth and Jackson Zimmerman ran for scores on runs of 2 and 30 yards, and Hunter Smith picked off a Jase Ferguson screen pass at the 4-yard line and stepped into the end zone.

The Wildcats (0-3), who were playing without the North Clarion contingent of the three-school co-op because that school shutdown over COVID-19 concerns for two days starting Thursday, scored on the final play of the first half on Ferguson’s 16-yard TD pass to Christian Simko. He hit Ashton Rex for a 34-yard TD to set the final score with 5:50 left in the game.

Krug played just one offensive series in the second half, throwing a 62-yard TD pass to Kunselman at the 6:53 mark of the third quarter. He also added 43 yards rushing on five attempts.

The Wildcats’ Ferguson completed 11 of 25 passes for 160 yards with his two TDs to go with two interceptions, one of them by Kunselman who picked off his fifth pass of the season. Simko caught six passes for 112 yards.

NOTE – Central Clarion senior Cole Wrhen was injured on a Zimmerman running play with 6:52 to play in the second quarter when his helmet was knocked off and he took an inadvertent knee to the head. Wrhen was taken off the field on a stretcher but gave the thumbs up on his way off. His dad, BJ, reports that he is doing ok and is in good spirits.

DUBOIS, Pa. – DuBois’s defense picked off four consecutive passes in the first half and rode those turnovers to a 34-6 win over visiting Kane.

The string of interceptions against Kane quarterback Harley Morris started with a drive-stopping interception inside the 10-yard by Justin Bankovich on Kane’s first drive of the game and continued with picks by Erich Benjamin, Garrett Frantz, and Braxton Adams.

The Adams’ interception was returned to the Kane 1-yard line, and Cam-ron Hays dove in from there to give DuBois a 14-0 lead a minute into the second quarter.

It was one of two touchdowns Hays, who split time at quarterback with Austin Mitchell, accounted for, as he also hit Cadin Delaney with a 60-yard screen pass 16 seconds into the second half to give the Beavers a commanding 28-0 lead.

It was one of just two completed passes on five tries for the DuBois quarterback duo.

Hays was 1-for-4 for 60 yards, the score, and an interception while also rushing three times for negative two yards and the touchdown.

Mitchell completed the only pass he threw for 23 yards and also scored the Beavers’ final touchdown on a 65-yard run on a broken play late in the fourth quarter to make it 34-0.

The shotgun snap to Mitchell on the play hit him in the knee, but the senior picked the ball up, ran to his left and found a crease, and was off to the races for the score.

Thanks to that run, Mitchell led DuBois in rushing with three carries for 72 yards.

Kane ran 61 offensive snaps to DuBois’ 33 but was outgained 303 to 241 and gave the ball away four times to DuBois’ one turnover.

DuBois also scored on a 28-yard run by Benjamin, who had two carries for 52 yards, and on a 19-yard scamper by Adams.

Kane’s lone touchdown came on a Morris 16-yard run with 45.3 seconds to play.

Ricky Zampogna ran 13 times for a team-best 50 yards before leaving the game in the second quarter and not returning.

Landon Darr had four catches for 36 yards for the Wolves (2-2), while Shane Ackley had two grabs for 42 yards. Darr also had an interception for Kane.

The Smethport senior quarter accounted for 252 yards and five touchdowns in the Hubbers 40-0 win at Bucktail.

He tossed a pair of scoring passes to Alex Ognen, who had four catches for 52 yards including scorers of 18 and 20 yards.

Ryan Pelchy had the other scoring catch for Smethport (4-0) reeling in a 26-yard pass from Lent.

Travis Cooney accounted for the Hubbers’ first touchdown on a 2-yard run late in the first quarter giving Smethport a 7-0 lead after 12 minutes of play.

A 27-point second quarter then put the game out of reach.

Smethport’s defense limited Bucktail to 20 yards of total offense, including seven through the air.

Ryan Mason led the defense with eight tackles with Cooney adding seven tackles, a sack, and an interception.

Bucktail fell to 0-3 with the loss.

Cooper added a touchdown catch from Bailey Crissman and also returned an interception for a score. He caught three passes for 44 yards.

Carter Terwint led the Union/A-C Valley defense with 12 tackles, including two tackles for a loss, while Card had nine stops including three TFLs.

Rainey’s 67-yard punt return late in the first half gave the Falcon Knights (2-1) a 21-0 halftime lead, and Cooper returned the opening second-half kickoff for a touchdown to make it 28-0.

Cooper then picked off a pass and returned it 27 yards for a score to put the Mercy Rule into action with 5:10 left in the third quarter.

Card scored on runs of 18 and 40 yards, while Cooper’s touchdown catch came from five yards away.

Coudriet was 30 of 42 passing for 273 yards and three touchdowns while adding a touchdown run in the win.

Justin Dornisch added a pair of rushing touchdowns for the Dutch and finished the night with 12 carries for 58 yards.

BRADFORD, Pa. – Domenic Allegretto and Eric Salberg each scored twice as unbeaten Ridgway pulled away from shorthanded Bradford for a 56-19 win in Bradford.

But the Owls (0-4), who were down several starters because of COVID-19 concerns, fought back and scored twice in 17 seconds to get within a point, 14-13.

Both touchdowns came on Talen Reese to Dalton Dixon. Reese, a freshman quarterback forced into action, threw scoring passes of 10 and 35 yards to Dixon, the second of which came after Bradford recovered a fumble on the kickoff following the first touchdown.

Ridgway, however, scored the final 28 points of the first half, including the first 14 just 28 seconds apart, to take a commanding 42-13 halftime lead.

Salberg scored the first and last touchdowns of the 28-point sequence scoring on a 2-yard run to make it 21-13 and then finding the end zone from 28 yards out to make it 42-13.

Just 28 seconds after Salberg’s first score, Dan Park returned an interception 50 yards to give the Elkers a 28-13 lead, and then Hinton followed with a 1-yard run to make it 35-13.

It was all Camron Marciniak on the opening drive of the second half, as he ran the ball seven times for 65 yards, including a 5-yard touchdown run that make it 49-13 and started the Mercy Rule with 8:32 to play in the third quarter.

The final touchdown for Ridgway came on a 5-yard Nat McCurdy run.

Reese made it three touchdown passes when he hit Jerrid Wilmoth from 27 yards away to set the final score.

TYRONE, Pa. – Oliver Billotte and Carter Chamberlin each ran for two touchdowns to help Clearfield stay unbeaten with a 42-12 win at Tyrone.

Billotte scored both of his touchdowns on 5-yard runs in the first half helping the Bison (4-0) to a 14-6 halftime lead before Chamberlin scored twice in the third quarter on runs of 15 and 2 yards to expand the advantage to 28-6.

That helped the Bison outgain the Eagles, 410 yards to 236 in the game.

Tyrone (1-3) got a 2-yard scoring run from Keegan Gwinn and a 5-yard touchdown pass from Luke Walk to Kolton Miller.

Gwinn ran for nine yards but was also 17 of 32 passing for 170 yards and an interception. Ross Gampe caught four passes for 79 yards.

Garing, Karns City Too Much for Rival Moniteau
Sept. 18 , 2021 Football: Maplewood, Redbank, McDowell, Wilmington, Warren Notch Wins
This website or its third-party tools process personal data.In case of sale of your personal information, you may opt out by using the link Do not sell my personal information.
×
Manage consent