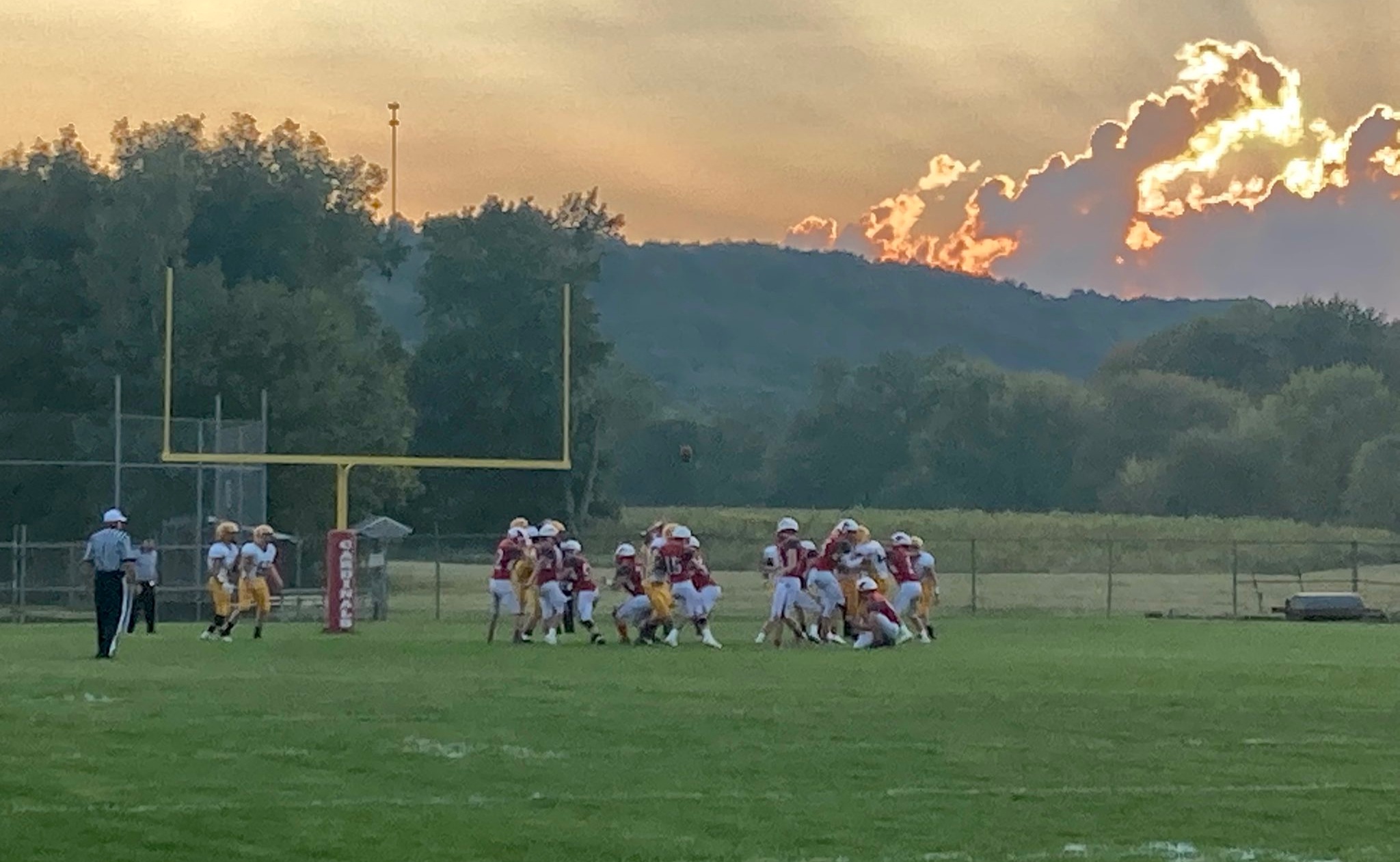 COCHRANTON, Pa. – In a battle of Region 2 unbeatens, it was Jack Martinec and Cochranton that got the best of Eisenhower, 34-13.

The loss snaps an 11-game regular-season winning streak for Eisenhower dating back to October of 2019.

Martinec had his second consecutive 200-yard rushing game, carrying for 265 yards and three touchdowns, while Noah Cummings tossed a pair of touchdowns.

Cummings got the scoring going early in the first quarter, connecting with Blake Foulk on a 36-yard touchdown pass, which was followed moments later by a 75-yard scoring run from Martinec that made it 13-0 in the first.

Cummings put the Cardinals ahead 19-0 in the second quarter on a 29-yard touchdown pass before Eisenhower got on the board at the 5:35 mark of the second quarter courtesy of a Shawn Pascuzzi to Keegan Eckstrom 65-yard pitch and catch.

That score held until early in the fourth quarter when there was a flurry of scoring. Eckstrom made it a one-score game, 19-13 on a 35-yard touchdown run, but that was as close as the Knights would get.

Martinec responded with two touchdown runs over the final five minutes, including a 50-yarder to put the game out of reach.

SOLON, Ohio – Cathedral Prep found itself trailing for the first time this season against cross-state foe Solon, but that proved to be short-lived in what was a 44-35 victory that improved the Ramblers to 4-0.

Carter Barnes had another big game for the Ramblers, throwing for a pair of touchdowns and adding two more on the ground.

Trailing 8-0, Luke Costello got the scoring going for Prep via a 2-yard plunge. That started a 34-7 run for the Ramblers that extended into the third quarter.

Prep scored three times in the second quarter courtesy of a pair of Barnes touchdown passes to Mike Parks (16 yards) and DeMario Crawford (35 yards). Barnes also called his own number from six yards out as the Ramblers led 27-15 at halftime.

It was more of the same in the second half, as Barnes opened the scoring with a 5-yard touchdown run to extend the lead to 34-15. Solon got as close as 37-29, but Wakeem Page returned the ensuing kickoff 80 yards for a touchdown to put the game away.

Barnes had 172 yards passing and 75 rushing, while Parks nearly went for 200 yards on the ground (197) in addition to 83 receiving yards.

Charlie Bubonics threw for 232 yards and four scores for the Comets, two of which went to Joel Kpasssou, who led the team with 95 receiving yards.

SLIPPERY ROCK, Pa. – In a Region 3 showdown, Slippery Rock jumped out to a 21-0 lead and never looked back en route to a 34-7 win over Grove City.

The Rockets got a big game from quarterback William Mokel, who threw for 215 yards and three touchdowns and also added a rushing score.

The Rockets scored twice in the first quarter, as Mokel hooked up with Brendan Earl on a 37-yard scoring strike, followed less than two minutes later by a Shane Thompson 16-yard run that made it 14-0.

Slippery Rock (3-0) struck again early in the second quarter, as this time it was John Sabo on the receiving end of a 21-yard pass from Mokel to make it 21-0.

That scored held until more than midway through the third quarter, as Earl and Mokel hooked up for the second time, this time from two yards out.

Grove City (2-2) was able to get on the board late in the third quarter courtesy of 23-yard run from quarterback Hunter Hohman.

Mokel put the finishing touches on his night with a 2-yard scoring run in the fourth quarter. Earl finished with 86 yards receiving and Sabo 59, while Ryan Montgomery had 58 yards on the ground.

Sean Kennedy got the scoring going with an 8-yard run in the first quarter for Hickory, but Conneaut returned the ensuing kickoff for a touchdown to knot the game at 7-7.

Nash Porada hauled in a 28-yard pass from Woods and Nakeem Jones’ second field goal of the half, a 27-yarder made it 20-7 Hickory.

The Hornets (2-2) got the ball back and struck again late in the first half, with Woods and Porada hooking up from 22 yards out to make it 27-7 at halftime.

It was the Woods to Whitehead connection in the second half, as the duo hooked up for scoring strikes of 11 yards.

Woods finished with 246 yards through the air, 117 of which went to Whitehead.

ALBION, Pa. – Northwestern quarterback Ryan Tewell threw for five touchdowns as the Wildcats rolled to a 48-12 Region 2 win over Saegertown.

Steinle also had a monster game with 208 yards receiving.

Henry Shaffer and Aaron Shartle each had rushing touchdowns for Saegertown (0-2).

OIL CITY, Pa. – Mikey Rodriques and Ja’on Phillips connected for a pair of first-half touchdowns to lead Sharon to a 23-0 win over Oil City.

The duo scored on pass plays of 36 and two yards in the first half, this on the heels of Sharon’s dramatic win over Hickory last week.

Nick Schimp connected on a third-quarter field goal to make it 17-0 and Jayvehr White put the finishing touches on the win for Sharon (3-1) with a 35-yard touchdown run in the fourth quarter.

Phillips accounted for 108 yards receiving of the 122 thrown by Rodriques.

JEFFERSON, Ohio – Ian Smith ran for 100 yards and a pair of touchdowns as Sharpsville held off Jefferson, 28-21.

Smith scored twice in the first quarter, the first from two yards out and the second a 75-yard burst to make it 14-0 Blue Devils (3-1).

In the second quarter, it was the Caullin Summers to Andrew Frye show, as the duo hooked up for a pair of second-quarter touchdowns to give Sharpsville its 22-point margin.

CORRY, Pa. – In a matchup between unbeaten and winless, Corry gave Fairview all it could handle, but ultimately it was the Tigers that improved to 4-0 with a 34-20 victory.

The game was actually knotted, 20-20 going into the fourth quarter before a 14-yard touchdown run from Jared Gennuso and a 38-yard burst from Charlie Chevalier put the game away in favor of the Tigers.

Gennuso had another big game on the ground, rushing for 143 yards and three touchdowns, while also on the receiving end of a scoring strike from Tyler Coribn.

Genuuso scored on a 3-yard run in the first half and caught a 30-yarder from Corbin, and the Tigers needed all of it.

Nathan Lesher played a strong game at quarterback for the Beavers, scoring on a 4-yard run in the second quarter and his short scoring scamper in the third quarter giving the Beavers a brief 20-13 lead.

Fairview answered, however, courtesy of a Gennuso touchdown run. In fact, the Tigers scored the game’s final 21 points.

Hunter Svetz finished with 137 yards and a touchdown on the ground for Corry, while Corbin had 130 yards through the air for the Tigers.

EDINBORO, Pa. – General McLane scored 41 points in the first half en route to a 54-8 win over Conneaut in Region 5 action.

The Lancers (2-1) got the scoring going on a John Amon 56-yard scoring strike to Dylan Sheeder and never looked back. Sheeder also scored on a 5-yard run and Amon also returned a kickoff for a touchdown.

Nate Danowski added a pair of rushing touchdowns for the Lancers.

HARBORCREEK, Pa. – Meadville’s vaunted rushing attack was too much for Harbor Creek in a 40-7 Region 5 win.

Khalon Simmons rushed for 140 yards and three scores and Griffin Buzzell added two more scores on the ground for the Bulldogs.

Leading 21-7 at halftime, Meadville outscored Harbor Creek 19-0 in the second half. Simmons scored on a pair of three-yard runs and also had a 72-yard scamper.

Matt Cassidy carried the ball for 88 yards for the Huskies.

NORTH EAST, Pa. – Tristin Harris rushed for 185 yards and three touchdowns and the Bison defense was dominant in a 42-6 win over North East.

Harris’ scoring runs were all of the lengthy variety, as he had a pair of 55-yarders and a 40-yard burst.

The Bison also got a 21-yard touchdown run from Justin Leuschen to help take a 21-0 lead into halftime.

ERIE, Pa. – David Bahm threw for a second-half touchdown and ran for another to lead Mercyhurst Prep to its first win of the season, 28-12 over Girard.

The Lakers led 14-12 at halftime, with Bahm’s scoring strikes aided by a shutout from the defense.

Bahm scored on a 12-yard run in the third quarter and later connected with Jeremy Ganska on a 21-yard touchdown.

Bahm actually had two rushing touchdowns, with a 2-yarder in the first half.

Zach Lowe and Gunner Bax had a pair of first-half rushing touchdowns for the Yellow Jackets.

District 9 and District 10 Football Live Scoreboard – Week 4 2021 (Sept. 16-18)
Garing, Karns City Too Much for Rival Moniteau
This website or its third-party tools process personal data.In case of sale of your personal information, you may opt out by using the link Do not sell my personal information.
×
Manage consent