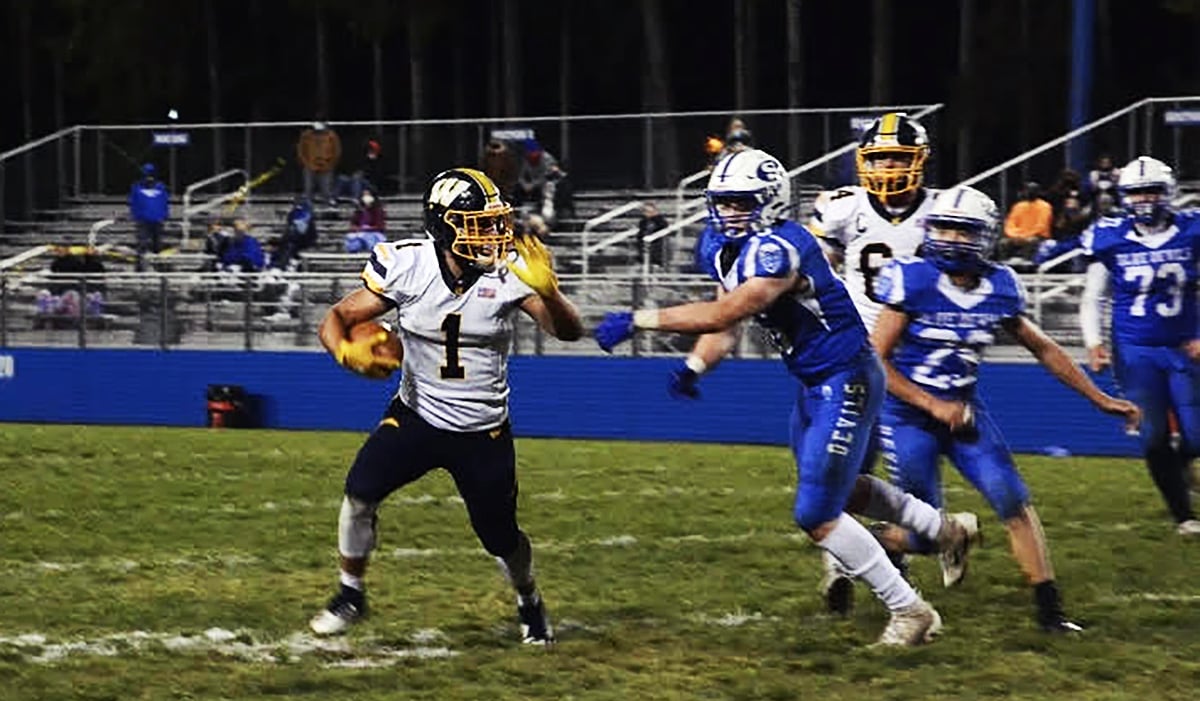 GUYS MILLS, Pa. – Maplewood outscored Brockway 18-0 in the second half to rally for an 18-7 win on Saturday.

The Tigers got on the board in the third quarter courtesy of a Dominick Kinney to Connor Palmiero scoring strike to make it 7-6.

Ben Gilberto was a workhorse for the Tigers, carrying the ball 29 times for 122 yards and a fourth-quarter touchdown, with Logan Gross also punching it into the end zone in the fourth quarter for the Tigers.

Kinney threw for 79 yards and added 56 more on the ground for Maplewood. Palmiero finished with four receptions for 64 yards.

SHEFFIELD, Pa. – Redbank Valley led 34-0 after the first quarter and never looked back in a 55-6 win over Sheffield.

Ashton Kahle scored on punt returns of 48 and 45 yards and Redbank Valley led 16-0 in the blink of an eye.

Gage Mott-Macalush scored on a 5-yard touchdown run for Sheffield.

ERIE, Pa. – McDowell’s Artis Simmons was a workhorse on Saturday, rushing for 260 yards and three touchdowns to help the Trojans to a 38-21 Region 6 win over Butler.

Simmons scored on runs of 3, 1 and 5 yards and also caught a 12-yard touchdown pass from quarterback Ben Moore to open the scoring, as McDowell improved to 3-0.

Moore threw for 190 yards and a touchdown.

Butler quarterback Max Schnur, playing in place of the injured Cooper Baxter, threw for 300 yards and a pair of touchdowns to Lance Slater and Charles Kreinbucher.

Butler got within 24-21 on Schnur’s 14-yard touchdown pass to Kreinbucher early in the fourth quarter, but Simmons scored his fourth touchdown of the game and Trey Goodwine iced it was an interception return for a touchdown.

GREENVILLE, Pa. – Wilmington bounced back from having its 22-game regular-season win streak snapped last week with a 42-15 win over Greenville.

Gage DeCaprio and Luke Edwards were a two-headed monster for the Greyhounds, scoring three touchdowns each and both going over 100 yards rushing in the process.

Wilmington led 13-0 after the first quarter on a 44-yard run from DeCaprio and a 4-yard scoring burst from Edwards and never looked back.

For Greenville. Jalen Ritzert threw a touchdown pass to Brady Kincaid and a 76-yarder to Gage Herrick.

FRANKLIN, Pa. – Warren put on an offensive N display in a 47-29 win over Franklin.

Eric Dippold connected with Ben White on a pair of long touchdown passes, including an 87-yarder to open the scoring. The duo also had a 24-yard pitch and catch for a touchdown later in the half.

With the win, the Dragons (3-1) maintained their spot atop the Region 5 standings.

Tommy Nyquist was a workhorse in the backfield for the Dragons, scoring on runs of 34 and 11 yards in the second half, while Sam Harvey added a 1-yard touchdown plunge.

Carson Wible had a big game for Franklin, scoring on a 1-yard touchdown run and also returning an interception for a touchdown. Hunter Marstellar connected with Cole Buckley on a 58-yard scoring strike as well for the Knights.