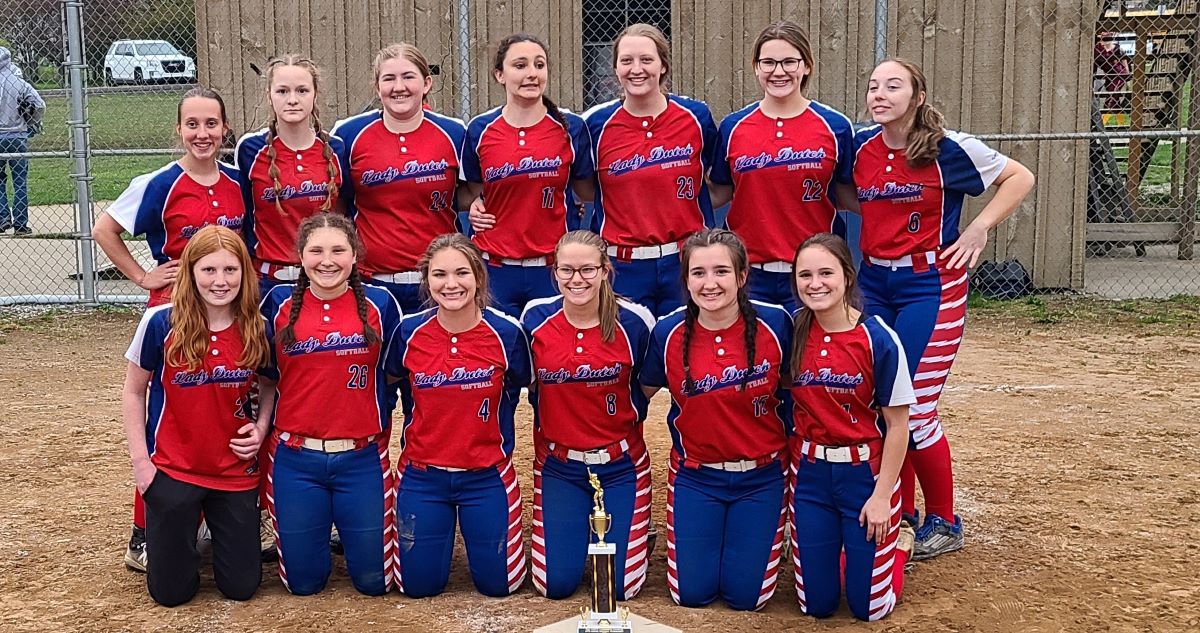 ST. MARYS, Pa. – Kara Hanslovan’s solo home run over the centerfield fence with one out in the bottom of the ninth lifted St. Marys to a 2-1 win over Johnsonburg in the title game of the Elk County Tournament at Benzinger Park in St. Marys.

It was a classic pitcher’s duel between St. Marys’s Kendall Young and Johnsonburg’s Julie Peterson.

Young was fantastic going nine innings allowing one run – a solo home run by Natalie Dunworth leading off the fourth – on three hits while striking out 17. Young fanned the first nine batters she faced before Dunworth’s homer and pitched out of a runner-at-third-and-no-out jam in the fifth and a runner-at-second-and-one-out jam in the sixth. She retired the final 11 batters she faced following a Dunworth double in the sixth.

Young and Hanslovan were named co-Allegheny Grille of Foxburg Players of the Game and talked about the win.

Peterson was nearly as good allowing two runs, one earned, on seven hits while striking out seven.

St. Marys scored an unearned run in the second to go up 1-0 when Lindsay Reiter reached on an error leading off and scored on an infield single by Rosa Deprator before Dunworth tied the game with her home run in the fourth.

Emma Saulter and Sierra Myers had doubles for Coudersport with Saulter going 1-for-2 with a run scored and an RBI.

ST. MARYS, Pa. – In the opening round of the Elk County Tournament, Olivia Eckels and Kendall Young each drove in five runs to help St. Marys to a 16-3, five-inning win over Coudersport.

Eckels was 3-for-4 with a double and three runs scored while being named the Allegheny Grille of Foxburg Player of the Game, and Young was 2-for-2 with a home run and two runs scored.

Eckles was named Allegheny Grille of Foxburg Player of the Game and talked about the win afterward:

Also for St. Marys, Gianna Surra went 2-for-4 with a double, a run scored, and an RBI, Rosa Deprator was 2-for-3 with an RBI and two runs scored, and Lauren Mosier scored twice.

Ava Wahlers had the lone hit for Coudersport.

ST. MARYS, Pa. – After falling behind 4-3 when Elk County Catholic scored twice in the bottom of the sixth, Johnsonburg scored three times in the top of the seventh to stun the Crusaders, 7-4, in the opening round of the Elk County Tournament.

Johnsonburg, which led from the third inning on, found itself behind for the first time in the game after Ellie Baron’s RBI infield single in the sixth.

But Marie Casilio got the seventh-inning rally started by drawing a leadoff walk, and she scored on a one-out double to left by Julia Jones to tie the game.

Jones then scored on a base hit to center by Jenna Kasmierski to give the Ramettes the lead back, and Zoey Grunthaner’s infield single scored two insurance runs.

Kasmierski was named the Allegheny Grille of Foxburg Player of the Game after going 3-for-4 with a run scored and three RBIs. She talked about the win.

Jones also had a big day at the plate going 3-for-3 with two doubles, a triple, three runs scored, and two RBIs with Grunthaner going 2-for-4 with two RBIs and Natalie Dunworth 2-for-4 with a run scored.

Emily Mourer and Hope Farley hit home runs for ECC while Sydney Alexander was 1-for-1 with a pair of walks and a run scored.

Jones got the win allowing four runs, two earned, on six hits, and two walks while striking out seven in seven innings in the circle.

Nine players made up the All-Tournament team including Makenzie Gentzyel and Emma Saulter from Coudersport, Emily Mourer and Hope Farley from Elk County Catholic, Julie Peterson and Natalie Dunworth from Johnsonburg, and Kendall Young, Kara Hanslovan, and Rosa Deprator from St. Marys.

Watch the All-Tournament team being introduced

May 5, 2022 D10 Baseball: Guth Fans 19 for Franklin; Djakovich Fires Shutout in Hickory’s Triumph Over Grove City
May 6, 2022 D9/10 Baseball/Softball Schedule Powered by the BHL Sportsperson of the Year Award
We use cookies on our website to give you the most relevant experience by remembering your preferences and repeat visits. By clicking “Accept All”, you consent to the use of ALL the cookies. However, you may visit "Cookie Settings" to provide a controlled consent.
Cookie SettingsAccept All
Manage consent