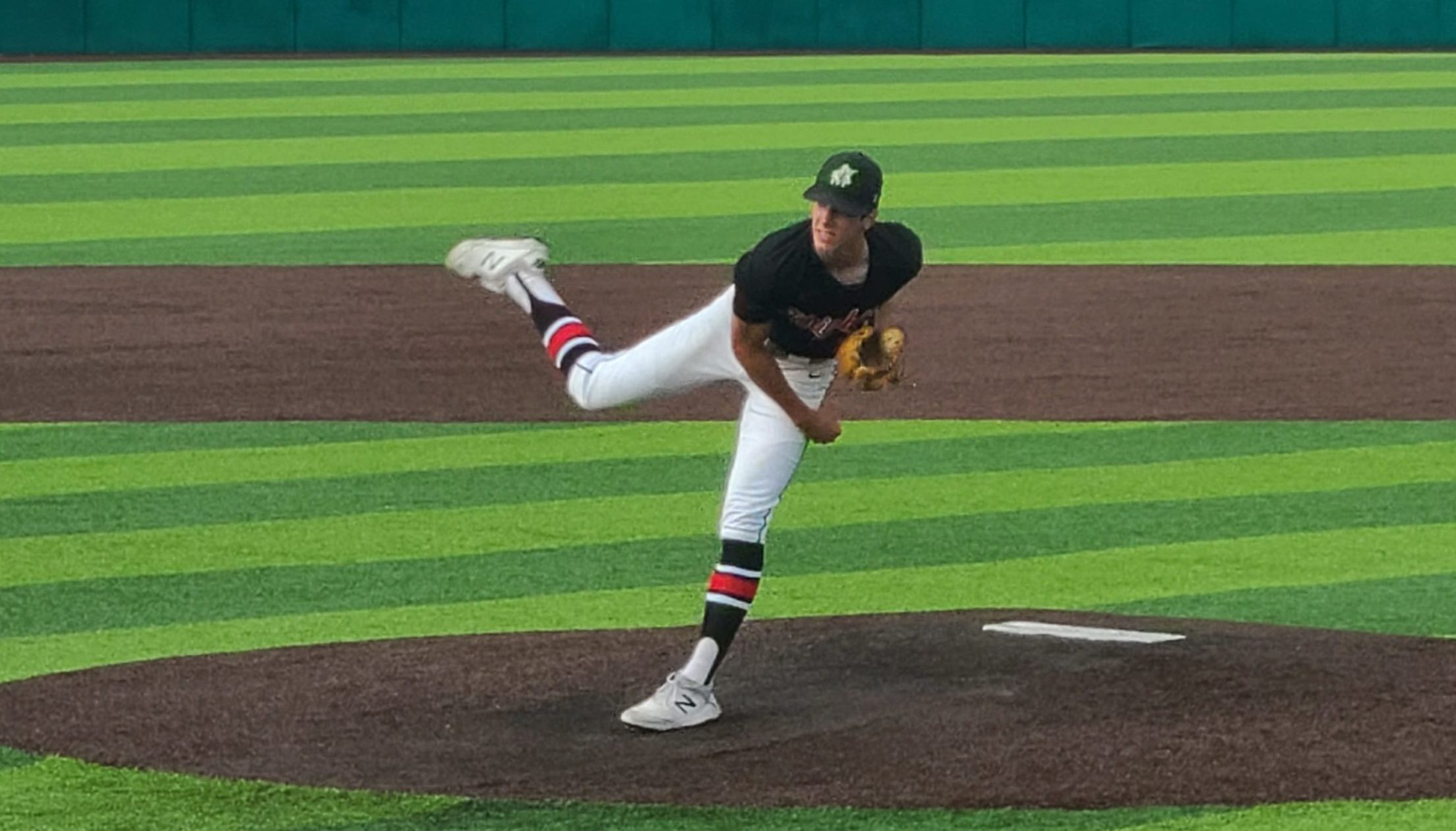 Guth allowed just one earned run on two hits over seven innings. He also hit an RBI triple as part of a 2-hit day at the plate.

Carson Wible, Noah Kockler, and Kyle Alexander each had a pair of hits.

Rocco Tartaglione picked up both hits off Guth, including a solo homer to lead off the seventh.

Djakovich struck out six and walked one, throwing 68 of his 93 pitches for strikes.

Offensively, the Hornets struck for a pair of runs in both the third and fourth innings. In the third Johnny Leedhaqm had an RBI double and DJ Donatelli an RBI single. Leedham followed with another RBI double in the fourth, part of a 2-for-3 day at the plate. Joey Fazzone also went 2-for-4 with a solo home run for the Hornets, while Luca Bertolasio was 1-for-4 with an RBI.

Hayden McCreadie and Michael Earman had two hits each for Grove City, with one of Earman’s two hits a double.

FAIRVIEW, Pa. – Fairview scored four runs in the first and made it hold up in a 4-1 win over visiting Oil City.

Connor Highfield took the loss allowing four earned runs on five hits and a walk in an inning. Koen Bearer gave up two hits and issued a walk while striking out three in five scoreless innings.

FRANKLIN, Pa. – Rocky Grove jumped out to an 8-1 lead in the first inning and never looked back en route to a 16-1 win over visiting Iroquois in four innings.

Isaac Clayton had two hits and three RBIs, while Trevor Hamilton, Michael Shields, and Brett Stevenson each drove in a pair.

Hamilton got the win allowing one unearned run on two hits with five strikeouts in two innings. Reece Henderson gave up a hit and struck out three over two scoreless innings.

NORTH EAST, Pa. – Andrew Aspden’s 3-run homer in the first proved to be the difference as North East held off visiting Titusville, 5-3, in a battle atop Region 4.

With the Pickers leading 2-0, thanks to Anthony Rizzo’s 2-run double, with one out in the first Aspden pounded a ball over the centerfield fence. The Rockets scored one run in each of the second, fourth, and fifth innings, but only got one runner into scoring position over the final two frames.

North East and Titusville currently share the top spot in Region 4 with 8-2 region records. They’ve split their regular season meetings with each team winning at home.

Aspden added a double later in the game.

Tyler Wittman got the win allowing three runs, two earned, on seven hits with a walk and two strikeouts in five innings. Courtwright gave up a hit and a walk in two scoreless innings of relief.

Garrett Knapp and Ashton Burleigh each had two hits for Titusville.

The Huskies scored six runs despite getting just a single hit in the inning. They drew four walks, had a hit batter, and took advantage of a pair of Dragons errors to plate the runs.

In fact, both teams scored most of their runs without getting hits. In addition to the first, Harbor Creek scored on a sac fly in the second, a single in the fourth, and on a bases load balk in the seventh.

Alexander Maldonaldo had two hits and two RBIs and Brady Rzodkiewicz had two RBIs in the win.

Eric Dippold, Anthony Errett, and Archie Teconchuk each had two hits and scored twice. Both of Dippold’s hits were doubles.

Gates struck out nine and allowed just two walks, throwing 60 of his 87 pitches for strikes.

Offensively for the Lakers, Jake Manendo was 2-for-4 with a triple and two RBIs, while Mike Nelliganwas 2-for-4 with two doubles and two runs and Ethan Ishimaru also drove in a pair of runs.

Preston struck out seven and allowed just one walk, needing just 76 pitches to get through his seven innings of work.

The Big Reds scored a single run in the second, two in the fifth and one more in the sixth. Hunter Hoffman went 1-for-4 with an RBI double, while Blaze Knight was 1-for-1 with a walk and two RBIs and Devin Gruver 1-for-4 with an RBi.

Tyler Bachman suffered the loss for Mercer, going five innings and allowing three runs on fourhits, striking out seven and walking one.

Bachman was also 2-for-3 with a double for the Mustangs.

GUYS MILLS, Pa. – Maplewood scored a pair of runs in the bottom of the sixth to earn a 2-1 win over Cochranton.

In the sixth, Elliott Beuchat had an RBI groundout and Stuart Hochstetler an RBI single.

Hochstetler went five innings on the mound, allowing five hits and one run, striking out six and walking three. Ethan Peterson got the win in relief, firing two shutout innings with three strikeouts.

Wyatt Barzak pitched strong into the sixth inning in a no-decision. He struck out 15 batters before reaching his pitch count limit, allowing just one run on one hit and three walks. Isaiah Long suffered the loss in relief, allowing one run in ⅔ of an inning.

Jack Rynd was 1-for-2 with an RBI double in the fifth inning to account for Cochranton’s run.

SHARPSVILLE, Pa. – Sharpsville broke a 3-3 tie with three runs in the sixth inning in a 6-3 win over Reynolds.

The Blue Devils had three consecutive RBI hits, as Stephen Tarnoci singled, Brock Lenzi singled and James Thomas tripled. It was part of a 3-for-4, 2-RBI effort for Thomas, while Jack Leipheimer was 1-for-3 with two RBIs.

Eli Eckles pitched six strong innings to get the win, allowing just three runs (one earned) in six innings, surrendering just two hits, striking out five, and walking three. Braden Scarvel pitched a perfect seventh to get the save.

Hayden Calenda and Ryan Broadwater had RBIs for Reynolds, while Nolan Reichard was 1-for-4 with a double and a run scored.

ERIE, Pa. – McDowell scored eight runs in the fourth inning on its way to a 12-2, five-inning win over Erie High.

Jose Quinones was 1-for-3 with two RBIs for Erie

WATTSBURG, Pa. – Ashton Johnson hit a two-run home run, part of a 3-for-3, five-RBI day as Girard powered past Seneca, 15-2 in six innings.

The Yellow Jackets led 8-2 before scoring seven runs in the sixth to put the game away. JJ Lehman was 2-for-4 with two RBIs and two runs, while Austin Shady was 3-for-4 with an RBI and Gunner Bax 2-for-3 with three runs.

Ben Runser went 1-for-2 with an RBI for Seneca.

May 5, 2022 D9 SB Recaps: Bowser Hits a Pair of HRs in Two Games for Keystone; Tyler Throws No-Hitter for DCC; Bradford Edges OV
Hanslovan Walk-Off Homer in Ninth Gives St. Marys Elk County Softball Tournament Title
This website or its third-party tools process personal data.In case of sale of your personal information, you may opt out by using the link Do not sell my personal information.
×
Manage consent