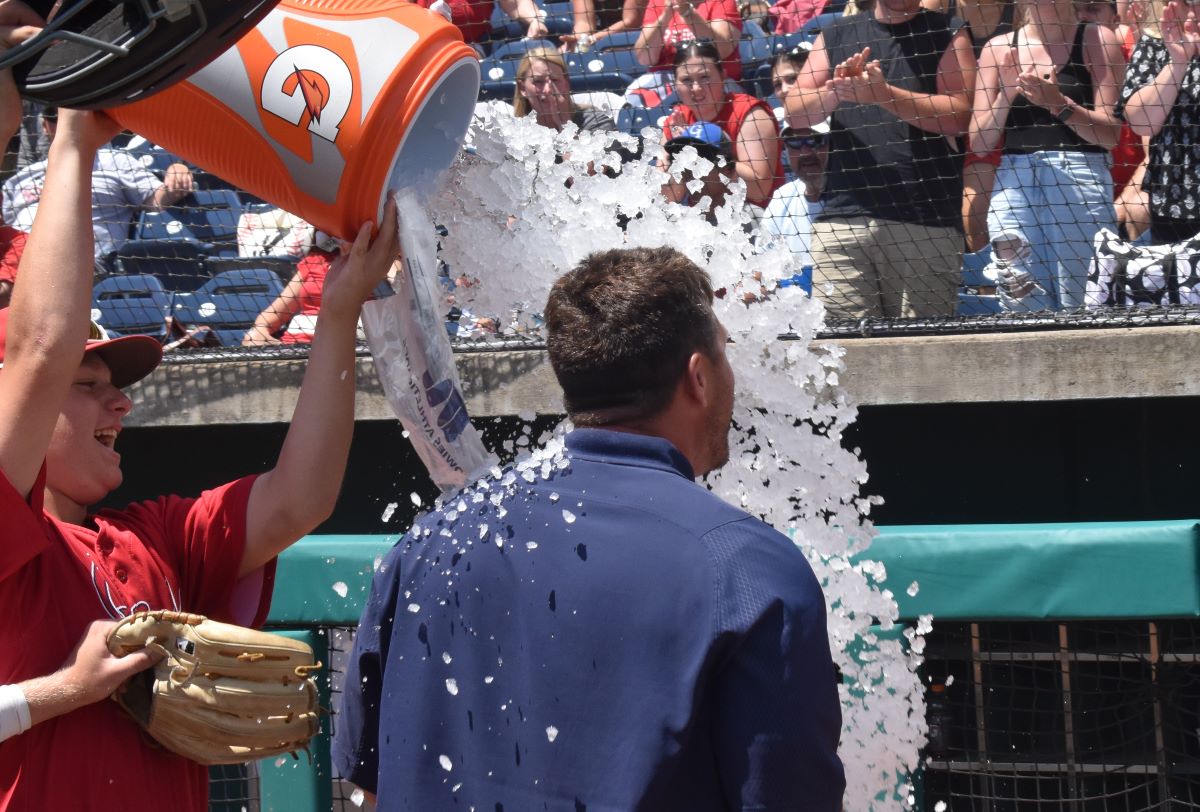 UNIVERSITY PARK, Pa. – Winning a state championship was something the DuBois Central Catholic players and coaches knew could happen before the season started.

It wasn’t arrogance. It was just quiet confidence in the talent on hand. Confidence that helped the Cardinals to a 12-2 win over defending champion Halifax in the PIAA Class 1A title game Friday.

“When I saw the roster,” freshman Brayden Fox, who had a key two-run triple and was the leading hitter on the season, said when asked when he knew DCC had a chance to win a state title.

Winning pitcher Brandin Anderson said the state title was a goal going back to last season when the Cardinals won the D9 1A title but lost in the PIAA playoffs.

“We have always had it as a goal,” Anderson said. “Everyone put time in the weight room. We were all hitting during the offseason, throwing, and everything. We knew if we put in the work, it was possible.”

Junior Carter Hickman, who had three RBIs in the contest, said he knew this team had the capability of winning the title during cage work in December.

“At the beginning of the season, in December, when we were hitting the in the cages, and stuff,” Hickman said. “It was just a special team. Everybody comes and they all do their job. They don’t complain. They all take their roles and do them very well.”

Manager Adam Fox, Brayden’s dad, knew he had a special team but he also knew the team needed to come together in order to win the title.

That happened following a 3-2 Game One loss to Elk County Catholic in a doubleheader at Stern Field in DuBois April 30.

The Cardinals rebounded to beat the Crusaders, 11-2, in the second game, the start of a season-ending 15-game winning streak that cumulated in the school’s second PIAA baseball title (the first game 21 years ago in 2001).

“This team gelled when we lost to ECC 3-2 and I ripped them a new one,” Adam Fox said. “That’s when we gelled because we came back and made whoever their starting pitcher was (Tommy Slay) throw a 70-pitch first inning (Slay threw 74 pitches in 1 ⅓ innings). That was huge.”

Starting with the Game Two win over ECC April 30, DCC was rarely even challenged with the closest games being four-run wins over Brookville (7-3, May 5) and Clarion-Limestone (5-1 in the D9 title game May 30), although the Cardinals were tied with DuBois going to the top of the seventh inning in the City Classic May 14 before winning, 9-4.

During the 15-game win streak, DCC won by 10 or more runs seven times, including three times in the PIAA playoffs.

Mission Accomplished: Clearfield Achieves Goal of Winning PIAA 4A Softball Title Powered by North Washington Rodeo
Cardiac Bison: Clearfield Kept Fans on the Edge During PIAA Championship Run Powered by North Washington Rodeo
This website or its third-party tools process personal data.In case of sale of your personal information, you may opt out by using the link Do not sell my personal information.
×
Manage consent