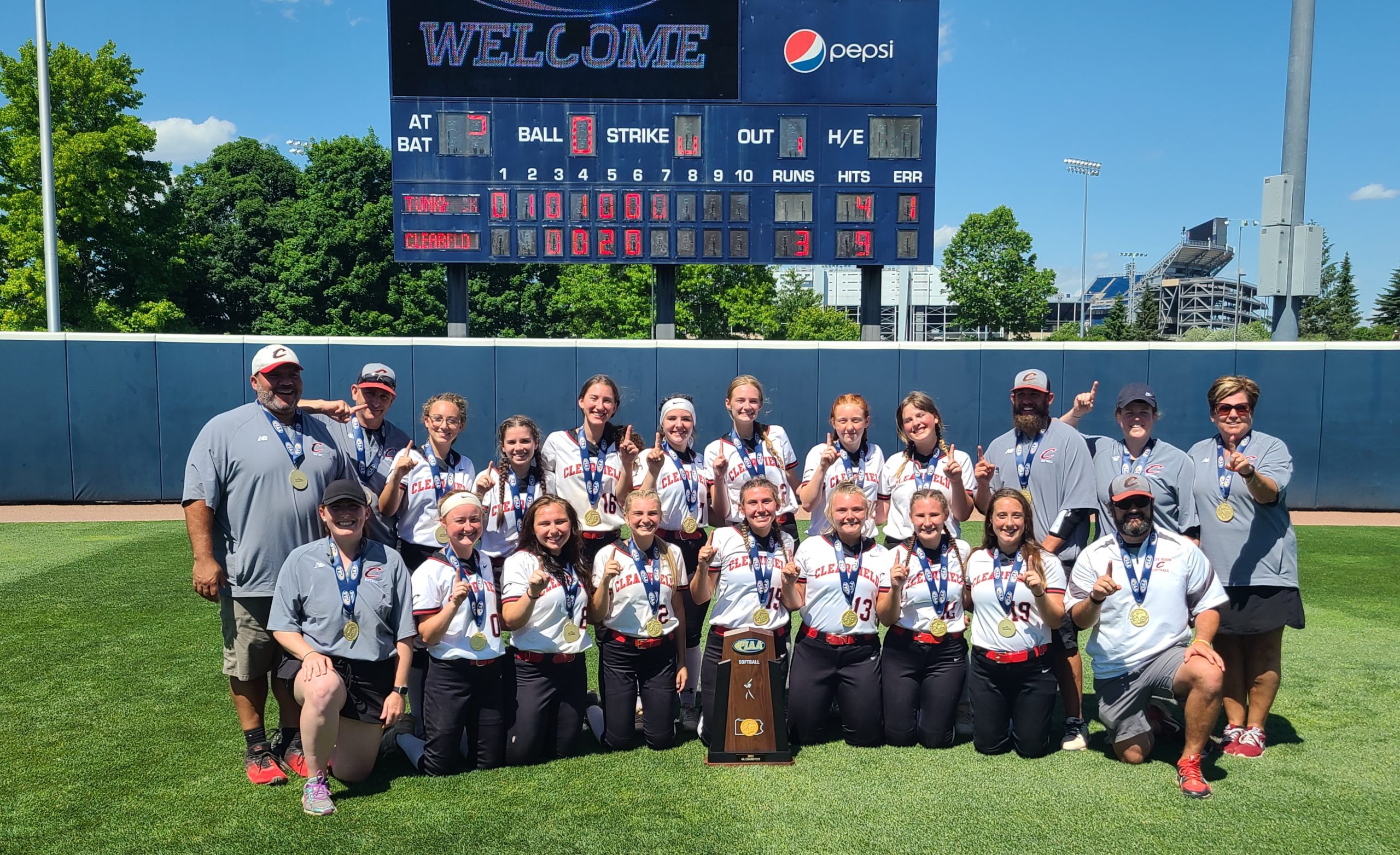 UNIVERSITY PARK, Pa. – Clearfield softball has had a flair for the dramatic in the PIAA playoffs, so it was only fitting that they won the state championship in walk-off fashion.

With the bases loaded, one out, and the game tied at 2-2 in the bottom of the seventh, No. 6 hitter Alexis Bumbarger stepped to the plate and blooped a single into shallow left field that brought in Ruby Singleton to deliver Clearfield its first state championship in any sport, 3-2 over Tunkhannock in the PIAA Class 4A title game.

It was the third and final walk-off in Clearfield’s run to the PIAA title, doing so in a first-round win over Franklin and a semifinal win over Beaver Area as well.

“Coach (Derek Danver) said you can do it, I believe in you,” Bumbarger said. “You need to have confidence in yourself. Just visualize where you want it to go and it’s going to happen.”

It was a goal the Lady Bison had at the start of the season, and now that they achieved it, coach Derek Danver couldn’t be more proud of his group.

See Clearfield get its championship medals:

And for Bumbarger to deliver the walk-off was extra special.

“She came up huge,” Danver said. “She has struggled in the playoffs so it was great to see her come up huge there. I told her to take a deep breath, nobody but you and the pitcher, you’re going to put the ball in play and win this game for us.”

Clearfield wasted no time in the bottom of the seventh again Tunkhannock pitcher Kyra Hannon. Singleton led things off with a single, and, after Hannon got Laura Ressler to pop out, Olivia Bender drove a ball deep to center that went just past the outstretched glove of center-fielder Hannah James, putting runners on second and third. Tunkhannock decided to intentionally walk Alaina Fedder, setting up a force at any base, but also setting the stage.

“I was confident in my girls,” said senior Emma Hipps, the winning pitcher. “ I had all the faith in the world in them coming up in the bottom of the seventh. “The last couple of times I’ve been nervous and ready to go extra innings, but today I was like it’s over, we’re winning.”

The Lady Bison once again got the win in come-from-behind fashion.

Trailing 2-0 in the fifth, Singleton, singled with one out, setting the stage for Ressler, who drilled an opposite-field homer to right to tie the game.

“I always say the fifth inning is our inning,” Ressler said. “That’s when we come alive. Knowing that there was a runner on and we were down, I was just thinking about how I can get that runner in. I was just trying to help out my team and definitely didn’t expect that.”

“That was the biggest point of the game, got us right back in it, our energy, our momentum,” Danver said. “Ressler’s usually a player that drives the ball to the left side. She got an inside pitch and turned on it. An unusual swing for her, but a great swing. She’s hit a couple of balls really hard foul. It was huge.”

Tunkhannock scored single runs in the second and fourth.

Sydney Huff’s RBI double in the second brought in Hannon, who singled with no one out. It could have been worse, however, if not for a great play by Singleton.

With Gabby Wood standing at second base after being hit by a pitch and swiping second, Hannon ripped a single to center. Singleton came up throwing, firing a strike to Bender at the plate. Bender applied the tag, and a run was kept off the board.

In the fourth, Hipps was a little unlucky, as Emily Schultz hit an infield single, with the throw to first getting away and rolling all the way to the right-field corner, allowing Shultz to come all the way around and score.

Apart from that, however, Hipps was brilliant, as was the norm during the entirety of her high school career. In her final high school start, she allowed just one earned run over seven innings on five hits, striking out 10 (including two in a 1-2-3 top of the seventh) without issuing a walk.

“She went out and did her thing,” Danver said of Hipps, who will play for Clarion University next season. “Since she’s came into high school as a freshman, all three years she’s pitched she has dominated. She gave us a chance the last three years to win every single game that we played. Hats off to her, it’s awesome to see her cap her career like this. She believes she’s just as good or better than every pitcher we’ve faced. She goes after every batter with confidence that she’s going to get them out.”

Using Season-Long Recipe for Success, DCC Wins PIAA 1A Baseball Crown Powered by North Washington Rodeo
DCC Had Quiet Confidence in Ability to Win PIAA Title From Preseason Forward Powered by North Washington Rodeo
This website or its third-party tools process personal data.In case of sale of your personal information, you may opt out by using the link Do not sell my personal information.
×
Manage consent