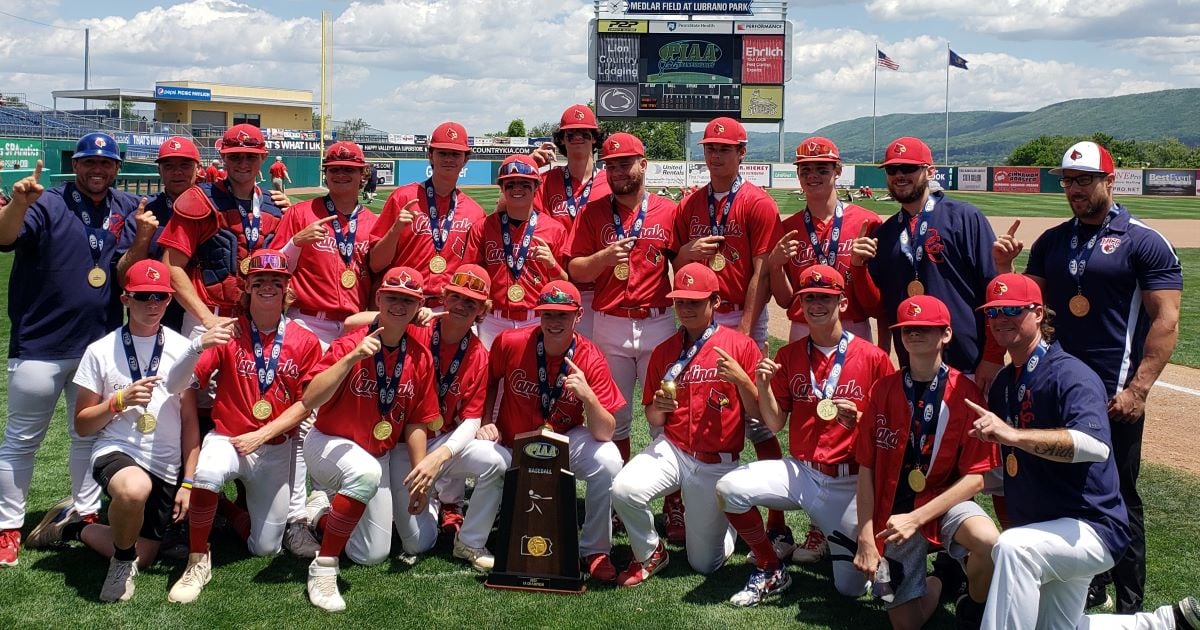 UNIVERSITY PARK, Pa. – DuBois Central Catholic had a recipe for success in 2022.

Throw strikes and grind out at-bats.

That recipe was on display Friday morning when the Cardinals claimed the second PIAA Class 1A baseball title in school history with a convincing 12-2 win over defending champion Halifax, out of District 3.

Watch the final out, a fly ball to centerfielder Matt Pyne

“It means everything,” DCC manager Adam Fox said. “As you and I talked the other night, this group is dangerous. They just know how to play the game. They have a super-high baseball IQ. They don’t panic.”

A five-run third inning proved to be the turning point in a game that was scoreless up to that point.

“We didn’t get going until the third inning,” Fox said. “Once we got going, we grinded out at-bats. Their ace (Eli Tyrell), I think we put him in a 47-pitch inning. That makes all the difference. Especially knowing he started Monday. That was our approach to play today. Just keep grinding and if we had to hit with two strikes, we were going to take that approach all day.”

Watch DCC get its championship medals

It was a 46-pitch inning to be exact for Tyrell with all but 12 of the pitches coming after two outs after DCC had taken a 2-0 lead on a Carter Hickman double and a Kaden Brezinski sac fly.

The sac fly to center was the second out of the inning, but Cole Sansom and Ben Gritzer drew back-to-back walks before a passed ball moved them 90 feet each leading to a two-run single by Brandin Anderson. Matt Pyne then had an RBI single to make it 5-0.

In all, DCC scored five runs with two outs.

“It’s smothering,” Fox said. “I use the word suffocating, smothering. These kids know how to hit. They have an approach at the plate. They do not fear hitting with two strikes. They just don’t care. They’ve learned a great approach. They’ve adapted to anything that is out on the mound. If they get beat one at-bat, they come back. They don’t carry it with them. They learn from every at-bat. This team has an advanced approach compared to everybody else. I think these guys just really put it together this year.”

Watch DCC get its championship trophy

While Halifax got a run back with some two-out magic of its own in the bottom of the third scoring on a single by Trent Strohecker, DCC never let off the gas on offense.

The Cardinals added a run in the fourth on a two-out Ben Gritzer double then tacked on four in the fifth with Aiden Snowberger and Carter Hickman each having RBI singles followed by an RBI triple by Brayden Fox, Adam’s son.

DCC looked poised to 10-run the Wildcats when Hickman singled home Matt Pyne in the sixth, but Halifax got the run back in the bottom of the sixth on an RBI single by Gus Alvarez.

Cole Sansom, though, bombed a solo home run over the 18.55 feet right-field wall with a home run that went probably 360 to 370 feet to put the lead back to 10 in the top of the seventh.

Anderson was the recipient of all that support, and the senior headed to Youngstown State didn’t waste it going the distance allowing two earned runs on six hits and a walk while striking out three. He needed just 89 pitches to get the win.

“My fastball was everything today,” Anderson said. “No one was really barreling it up. It usually moves a lot, and it had some good run to it today. I felt good control for it. That was definitely my go-to- pitch today.”

On offense, Hickman led the 13-hit DCC attack going 3-for-4 with a double, a walk, two runs scored, and three RBIs.

Hickman credited Adam Fox for the team’s ability to grind out runs without a ton of power.

“That’s just our approach,” Hickman said. “Coach Fox has been teaching us since I was like eight years old. I just trust it.”

Anderson and Brayden Fox also drove in a pair of runs each with Anderson going 2-for-4 with a double and a run scored and Fox, just a freshman, capping off an incredible freshman season by going 1-for-5 with a triple.

Brayden Fox said getting to share the title with his dad as the manager is extra special.

“It’s awesome,” Brayden Fox said. “Sometimes you get a lot of hate because your dad is the coach, but I love it.”

Strohecker led Halifax, the D3 runner-up, going 2-for-3 with a run scored and an RBI, while Tyrell took the loss going three innings allowing five earned runs on four hits and six walks while striking out two.

Adam Fox credited the competition his team got during the regular season for helping prepare his team for the postseason.

NOTES: DCC is the first District 9 team to win a PIAA title since Johnsonburg won the 1A crown in 2013 … The Cardinals join that team, the 2001 DCC team, and the 2007 Punxsutawney team (3A) as the only D9 teams to take home PIAA baseball title … Halifax was trying to become the first back-to-back PIAA champion since Loyalsock did so in 2A in 2013 and 2014.