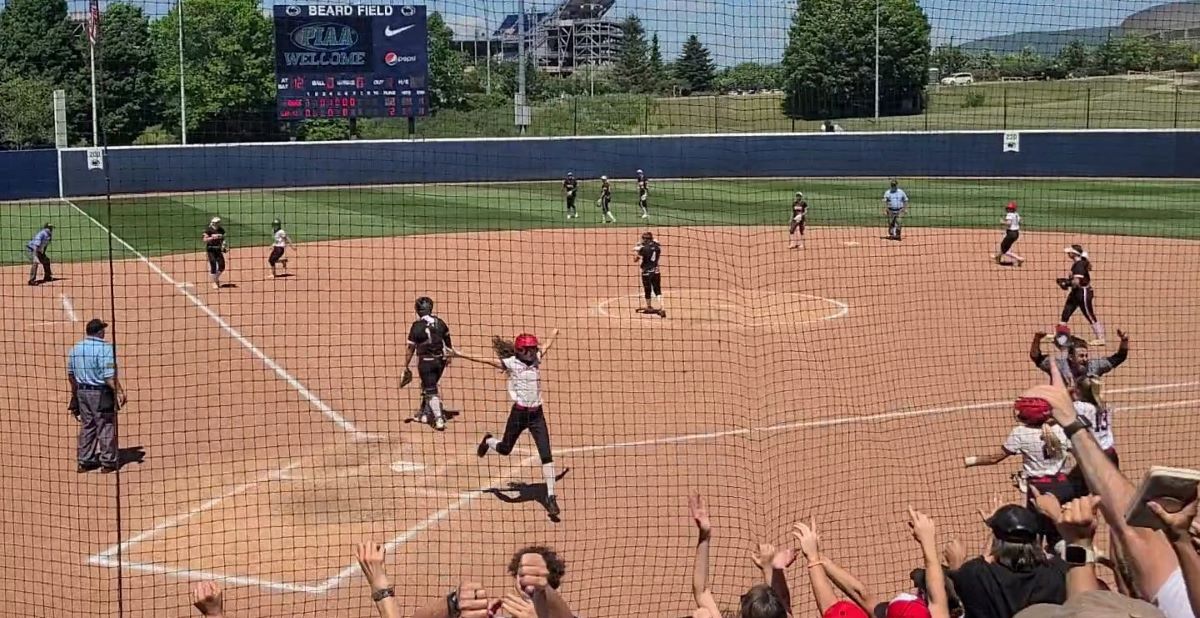 You will have to excuse Clearfield if it had a feeling of deja vu When Alexis Bumbarger’s pop fly fell just over the head of Tunkhannock shortstop Emily Schultz in between left fielder Erin VanNess and centerfielder Hannah James and Ruby Singleton raced home with the PIAA Class 4A championship-winning run Friday afternoon at Beard Field at Nittany Lion Softball Park.

It was, after all, the third time in four PIAA playoff wins that the Lady Bison had walked off a team.

“We were just fortunate to be batting last in those games,” Clearfield manager Derek Danver said moments after the medal ceremony.

It started June 6 when the Lady Bison beat District 10 champion Franklin, 4-3, when pinch-runner Paige Houser score on a wild pitch in the bottom of the seventh knocking the ball out of Lady Knights’ pitcher Trinty Edge’s glove.

“That was just a lot of anxiety,” Houser said after that game. “I did not break right away.”

Two games later, Clearfield was at it again.

This time, in the PIAA semifinals against defending champion Beaver, winners of 42 straight games, the Lady Bison won the game in the bottom of the seventh when Singleton singled home Alexis Benton to give Clearfield a 2-1 victory.

“It was a lot of pressure,” Singleton said after the semifinal win. “I was actually hoping that Emma (Hipps) would get it, but I’m also glad I got the opportunity. It’s a once-in-a-lifetime type thing. I just went in the box and when I saw that pitch I hit it.”

In the title game, it was Singleton leaping into the arms of Kylee Hertlein, the on-deck batter, when Bumbarger’s hit fell harmlessly to the ground giving Clearfield the championship.

“Coach said you can do it, I believe in you,” Bumbarger said. “You need to have confidence in yourself. Just visualize where you want it to go, and it is going to happen.”

The championship game showed another theme that was prevalent throughout the PIAA run for Clearfield, scoring runs late.

In addition to the three walk-off win, Clearfield found itself down or tied in going to the fifth in three of the games and holding a slim 1-0 lead in the fourth game, a 4-0 win over Hamburg in the quarterfinals.

In each case, Clearfield’s offense came alive late to lead to wins.

Against Franklin, the Lady Bison were down 3-2 heading to the fifth but tied the game on a Bumbarger bunt that scored Lauren Ressler, who had led off the inning with a single.

In the semifinals against Beaver, Clearfield trailed 1-0 going to the sixth when Ressler doubled with two outs and Oliva Bender singled her home to tie the game at one.

Down 2-0 going to the bottom of the fifth in the title game, it was Ressler again in the middle of the comeback hitting a two-run home run to tie the game at two.

“We have played together forever,” Bender said. “We are just a group that bounces off of each other. Even when we get down, we pick each other up. We keep fighting until the end every time.”

“They give up,” Danver said. “They are resilient. They are gamers. You can never count them out.”

DCC Had Quiet Confidence in Ability to Win PIAA Title From Preseason Forward Powered by North Washington Rodeo
Guth Named D9and10Sports.com Baseball Player, Pitcher of the Year; Fultz Jr., Walters Honored; All-D10 Teams Named
This website or its third-party tools process personal data.In case of sale of your personal information, you may opt out by using the link Do not sell my personal information.
×
Manage consent