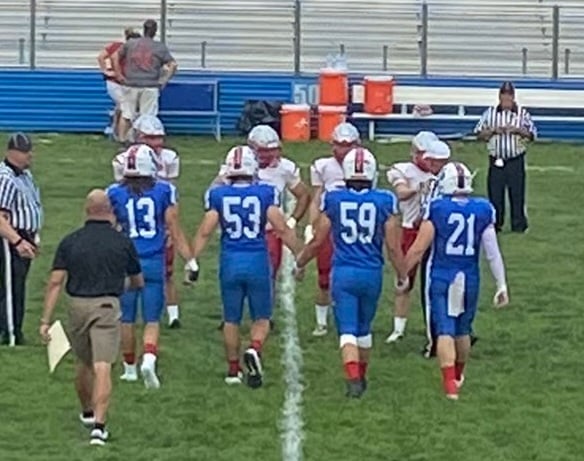 SHARPSVILLE, Pa. – It’s never easy when a school loses its football program, especially one with a tradition as rich as West Middlesex.

But, when your biggest rival steps up to the plate to make sure Big Reds’ players still have a place to call home, well that’s heart-warming.

That was the case in 2021, when the Sharpsville and West Middlesex school boards, as well as District 10 signed off on the co-op.

The co-op did come with a downside, as the Blue Devils bumped up for Class 2A to Class 3A with the new numbers and were ineligible to compete in the playoffs, but the positives far outweighed the negatives for longtime head coach Paul Piccirilli’s Blue Devil squad.

There’s no way it couldn’t be considered anything but an overwhelming success, as the Blue Devils went 7-3, including an impressive 21-7 win over Reynolds.

The defense, led by D9and10Sports All-District 10 linebacker Ian Smith, a West Middlesex student, allowed just a shade over 15 points per game, including holding opponents to single digits on six occasions.

“While I understand an announcement like this magnitude can be earth-shattering to many community members, it is undoubtedly the most appropriate decision to assure the longevity of our history-rich program.”

West Middlesex hopes to bring back its football program at some point, but at least for 2021, the two schools and players combined to produce one of the most feel-good stories of the sports year.