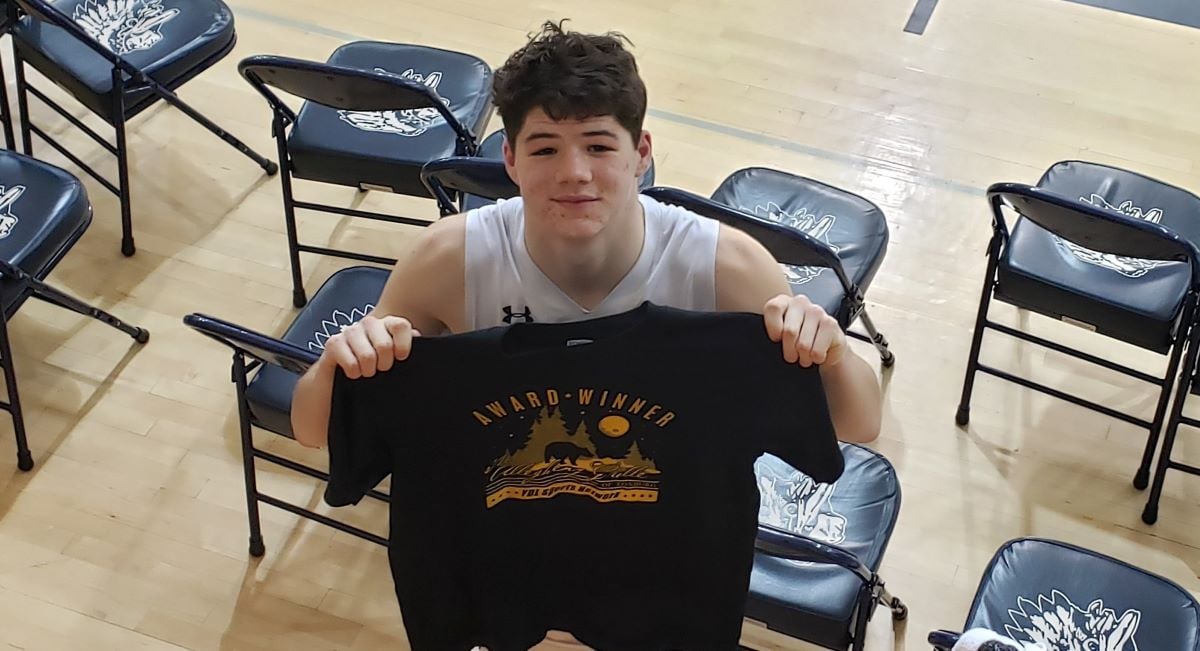 Jack Pete helped Brookville complete the season sweep of DuBois Monday and was named the Allegheny Grille of Foxburg Player of the Game. Photo by Chris Rossetti

BROOKVILLE, Pa. – Thanks to a lightning-fast start led by the charging Jack Pete, Brookville ran out to a 17-3 lead and rolled to a 45-24 win over visiting DuBois in D9 League action.

Pete scored eight of his team-high 13 points in the first quarter and keyed that 17-3 run out of the gate with four steals, four rebounds and one assist. He finished with seven steals and six rebounds while connecting on 6 of 8 shots from the floor and was named the Allegheny Grille of Foxburg Player of the Game.

Pete talked about the victory

The Raiders led 17-7 after the first quarter and closed the second quarter with a 10-2 run for a 27-13 halftime lead thanks to Connor Marshall’s 3-pointer with three seconds on the clock.

A 7-0 run to start the third began with another Pete steal and layup. Noah Peterson’s 3-pointer and Kellan Haines’ steal and layup made it 34-13 with 5:33 left in the third quarter. The Raiders led by as many as 22 points at 43-21 on the final points of Haines’ 10-point night with 1:59 left in the game.

The victory gave Brookville a sweep over DuBois in the season series. It is the first sweep of their rival for the Raiders since the 2010-11 season.

The Bulldogs trailed by one, 37-36, when Braden Dunn missed the front end of a one-and-one for the Wildcats with 24.4 seconds to play, and Mason Clouse got the rebound for Redbank Valley.

The ball then ended up in the hands of Owen Clouse above the 3-point line at the top of the key, and he took his defender one-on-one to the hoop for the go-ahead score.

Watch the play via Home-Center/NFHS

Homer-Center’s Owen Siani got a good look inside the paint in the final seconds, but his shot over a defending Mathew Kozma was rolled off the rim, and the Bulldogs collected the rebound as time ran out.

KANE, Pa. – Jordan Wasko led a trio of Elk County Catholic players in double digits with 15 points, as the visiting Crusaders rolled to a 57-29 AML win over Kane.

Wil Wortman and Colby Nussbaum each added 10 points for ECC with Michael Jacobs chipping in with nine tallies.

RURAL VALLEY, Pa. – Visiting Clarion-Limestone got 18 points, six rebounds, six assists, and three steals from Jase Ferguson on its way to a 63-38 win over West Shamokin.

Road Queens: Visiting Teams Go 7-for-8 in D10 Girls’ Hoops
Redbank Valley’s Huffman Hits 1,000-Point Mark in Lady Bulldog Win Over Homer-Center
This website or its third-party tools process personal data.In case of sale of your personal information, you may opt out by using the link Do not sell my personal information.
×
Manage consent