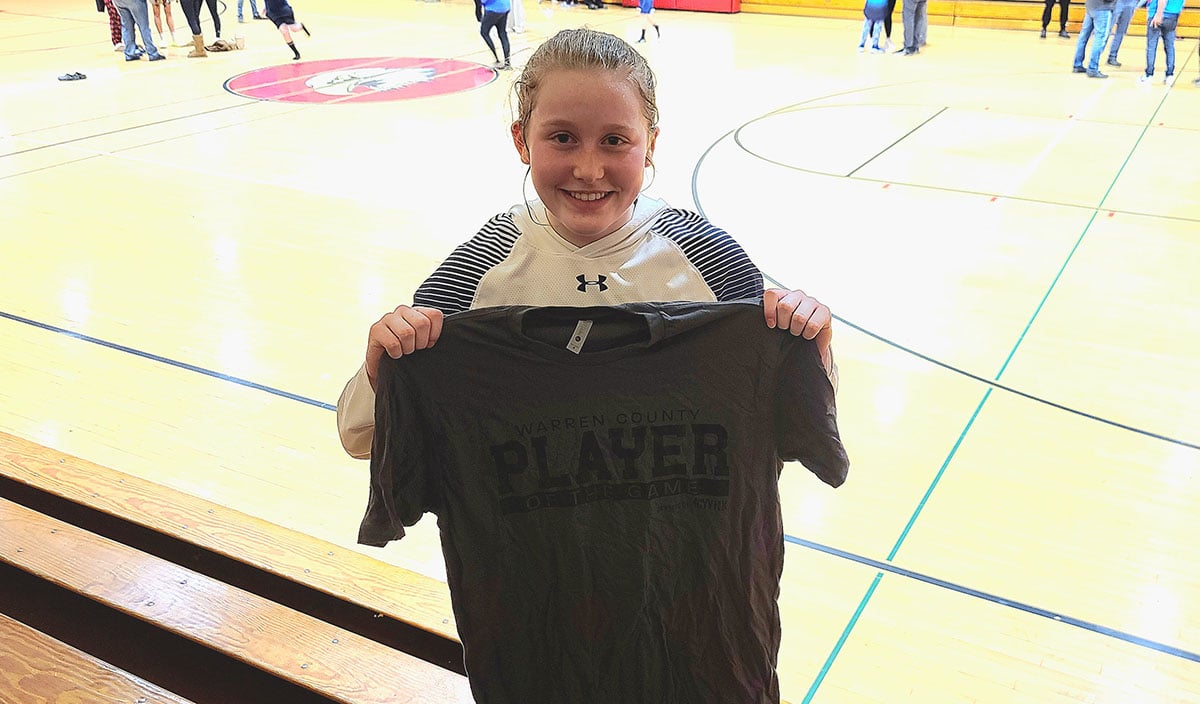 Eisenhower's Lainey Font earned Allegheny Grille of Foxburg Player of the Game powered by Icyy Ink honors for her effort in the Knights' win over Youngsville. Photo by Brian Hagberg

It was a good night to be the visitor in District 10 as seven of the eight teams playing on the road emerged victorious in Monday’s girls basketball action.

EDINBORO, Pa. – Northwestern built an early lead and made it hold up as the Wildcats picked up a 47-41 win at General McLane.

Northwestern held on for the win despite not making a field goal in the fourth quarter. The Wildcats went 8-8 from the free throw line in the final eight minutes to fend off the Lancers.

Chloe Yazembiak scored eight of her 13 points in the first quarter to help Northwestern build a 13-6 lead.

Libby Opp’s 8-point second-quarter outburst helped the Lancers keep pace, but GM was outscored 12-5 in the third to trail 39-25 heading into the fourth.

McKayla Presser-Palmer had a game-high 19 points in the win.

YOUNGSVILLE, Pa. – The Knights learned their lesson from the season-opener and kept their foot on the gas all game long as Eisenhower earned a 61-34 win at Youngsville.

Eisenhower took a big third-quarter lead when the two teams met back in December, then had to hold on for a 53-49 win after making substitutions and pulling back to a less aggressive offensive game.

On Monday, the Knights kept the pressure on offensively until the end.

“We tend to let up at times,” Eisenhower’s Lainey Font said. “But our coach kept us on our toes this game. We really wanted this one.”

The teams traded blows through the early part of the first quarter, but Riley Robinault went down hard on the inbound pass after the Knights took a 5-4 lead and Eisenhower took advantage of the absence to go on a 12-0 run.

Robinault returned later in the quarter and hit a buzzer-beating layup to stop the run, but the lead was too much.

Eisenhower’s aggressive, pressure defense created multiple transition opportunities and the Knights took advantage to slowly build on their lead. It was 33-16 at halftime and 45-24 by the end of the third.

Robinault finished with a team-high 12 points. Shea Walton and Zaylee Cressley each had eight points.

Clara Steinberg had a game-high 18 points and was one of four Eisenhower players in double figures. Lilly Smyth had 12 points, Font finished with 11, and Laney Belcher added 10.

Gamble scored all nine of the Eagles’ third-quarter points, while Como scored six of her 12 points in the second quarter to help Grove City take a 25-14 halftime lead.

Pressley Washil had 10 points for Mercer.

LINESVILLE, Pa. – Grace Cano and Josie Lewis each scored more than 20 points to lead Greenville to a 56-43 win at Conneaut.

Cano scored 10 of her game-high 24 points in the second quarter, and Lewis put in eight of her 21 points in the fourth quarter. Lewis knocked down three 3-pointers as part of her effort.

Lainie Harrington had 15 points for the Eagles, while Hannah Brady added 10.

Draya Neavins scored eight of her game-high 16 points in the first, while Aubrey Neavins put in six of her 12 points in the second as Erie built a 32-8 halftime advantage.

MEADVILLE, Pa. – Fairview asserted itself early and never let up on its way to a 57-10 win at Meadville.

Bre Heidt led a trio of Tigers in double figures with 12 points. Hope Garrity had 11 and Riley Sholes had 10 in the win.

Brooke VanTassel scored 10 of her 14 points in the first for the Bears.

Brooklyn Taylor added 12 points for the Lady Gremlins with Savanna Prescott chipping in with eight points.