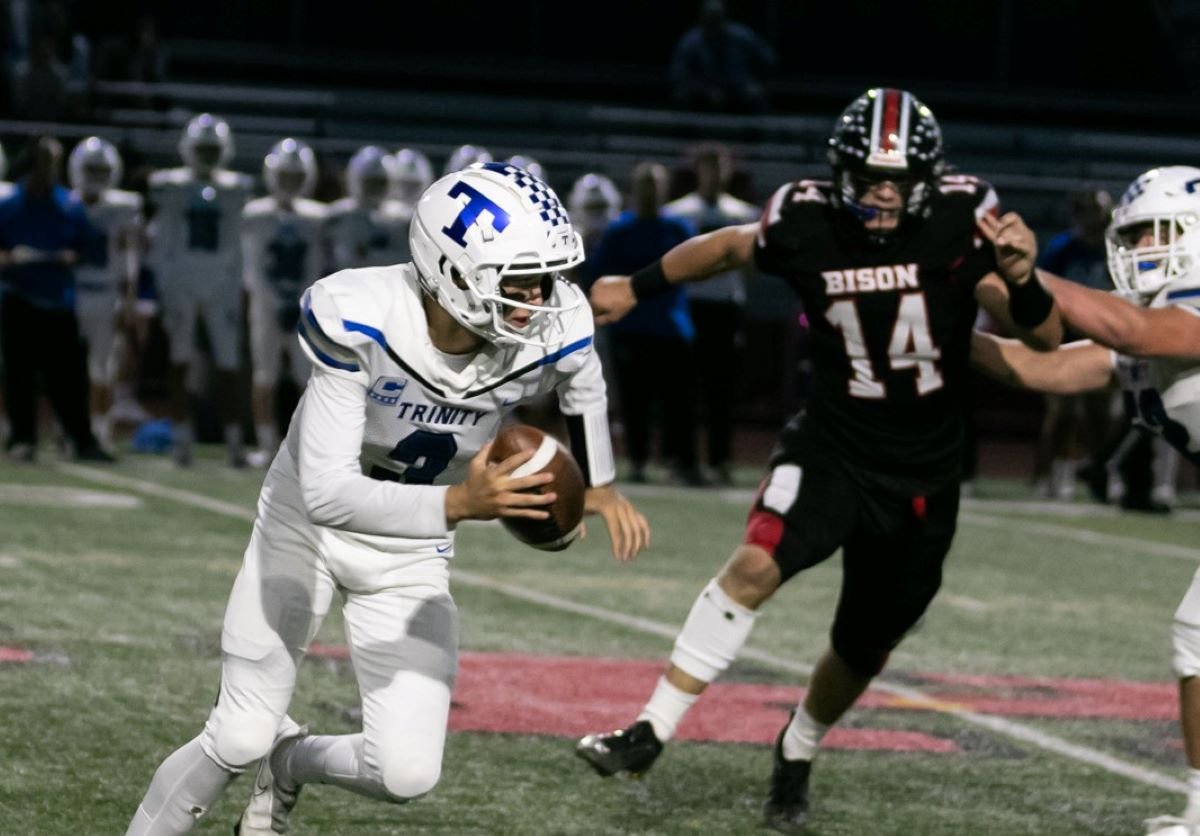 The Bison defense threw its third straight shutout and ran its streak to 12 quarters without allowing a point thanks to a 30-0 win over Trinity from the WPIAL. Overall, Clearfield has given up just 26 points in seven games winning all seven to remain the only unbeaten team in District 9 after Keystone lost Thursday.

Mark McGonigal, who scored one of the four Bison touchdowns and ran for a team-best 58 yards on 13 carries, talked to Jared Bakaysa about the win.

McGonigal was part of a balanced offense for Clearfield that saw four different players reach the end zone.

Clearfield last gave up a touchdown in the fourth quarter of a 42-12 win at Tyrone Sept. 17.

Trinity fell to 2-5 with the loss.

Curwensville (4-3) led 24-8 early in the fourth quarter before the Red Dragons scored two late touchdowns, including a 13-yard Elick to Jayce Brooks touchdown pass that cut the deficit to two points late in the game.

Following the denied 2-point play, Purchase Line tried an on-side kick that Curwensville recovered, and the Golden Tide offense was then able to run out the clock.

The final 17 of those points came in the third quarter after the Golden Tide took a 7-0 halftime lead.

A 9-yard Elick to Brady Sytsrer touchdown pass was the lone Purchase Line score of the third quarter and got the Red Dragons within six, 14-8, at the time.

Terry had six catches for 127 yards giving him 818 on the season surpassing the previous mark of 781 set by Quamone Newkirk in 2015.

It was an up-and-down night for McGarry, as he also threw a pair of interceptions.

Mullins added six catches for 107 yards for the Golden Tide.

ST. MARYS, Pa. – Christian Coudriet threw for 332 yards, passing for a touchdown and ran for another as St. Marys held off Brookville’s second-half rally for a 19-14 win at Dutch Country Stadium.

Earlier, Coudriet scored on a 1-yard run on the Dutch’s first possession, then on Brookville’s next possession, Alex Lukaschunis sacked Raiders quarterback Charlie Krug and forced a fumble that was picked up by Eli Rippey who returned the ball 55 yards for a touchdown.

Lukaschunis had at least four of Moniteau’s seven sacks of Krug, who still managed to key Brookville’s second-half comeback. Krug hooked up with Noah Peterson for a 66-yard TD pass late in the third quarter and ran one in from 13 yards out to cut it to what turned out to be the final score with 9:11 remaining.

Krug completed 18 of 32 passes for 262 yards while Peterson caught five passes for 131 yards.

PUNXSUTAWNEY, Pa. – Zeke Bennett ran for 249 yards and four touchdowns to help Punxsutawney to its first win of the season, 49-21, over visiting and wineless Bradford.

Bennet’s 69-yard touchdown run broke open a seven-point game at the time giving Punxsutawney a 35-21 lead before his 37-yard scoring run made it 42-21.

That was one of two interceptions on the night for Miller, who also forced a fumble.

Weaver ran for 85 yards and the score and also threw for 20 yards.

Fitton did a little bit of everything on all sides of the ball.

In addition to his pick-six, he was 9 of 17 passing for 86 yards, a touchdown, and an interception while rushing eight times for 46 yards and catching six passes for 75 yards.

Bradford head coach Jeff Puglio was thrown out of the game in the fourth quarter after receiving his second unsportsmanlike penalty of the game.

It was the second straight win for the Wildcats (2-3 D9 League Large School, 2-4 overall) after losing four straight to start the season.

The game turned in the third quarter on a pair of Jase Ferguson to Christian Simko touchdown passes.

With the game tied at 14, Ferguson hit Simko with a 38-yard scoring pass just 1:53 into the second half to put the Wildcats up seven.

Seven minutes later, Ferguson found Simko from 21 yards away to make it 27-14.

With the game all but over, Breckin Rex returned an interception 20 yards for a score with 16 seconds left.

Central Clarion led 14-6 at the end of the first quarter thanks to a 12-yard Ferguson run and a 70-yard Ferguson to Ashton Rex touchdown pass sandwiched in between a 55-yard fumble return for a touchdown by Domenic Allegretto.

Ridgway (5-2, 5-2), losers of two out of its last three, tied the game late in the first half when Jonathan Hinton hit Cam Marciniak with a 12-yard touchdown pass and then the duo hooked up on the two-point conversion.

Breckin Rex led the ground game for Clarion with 24 carries for 162 yards with Ryan Hummell adding 88 on 14 carries.

Hinton was 14 of 25 passing for 169 yards and a touchdown for Ridgway with Cameron Larkin going 3 of 7 for 30 yards and an interception.

Tyler Merritt caught five passes for 77 yards for the Elkers with Marciniak catching six for 63 and the touchdown while adding 18 yards rushing on six carries. Allegretto had three catches for 50 yards.

Three of Fox’s scoring passes came in the final 12:42 of the contest, as Brockway (2-2 D9 League Small South, 3-4 overall) broke open a six-point game by scoring the final 21 points.

But Fox, who also threw an interception in the contest, and the Rovers responded with the 18-yard pass to Kosko to make it 20-7 going to the fourth quarter.

Fox then threw the 35-yard scoring pass to Kosko midway through the quarter to put the game away before hitting Carlson with the scoring pass with just over three minutes left.

Brockway outgained ECC 463 yards to 139 but was hurt by nine penalties for 95 yards while the Crusaders were penalized just twice for 10 yards.

Brockway also had a 100-yard rusher with Carter Hickman running 21 times for 123 yards, including a 19-yard touchdown run late in the first quarter to put the Rovers ahead 13-0.

Adams was named the Allegheny Grille of Foxburg Player of the Game and talked about the victory.

Thanks to Adams and Henery, DuBois ran for 323 yards on 46 carries, an average of just over seven yards per carry.

David Dessicino accounted for most of those yards for the Warriors going 8 of 17 passing for 67 yards and rushing eight times for a team-best 41 yards and a touchdown.

Dessicino’s 1-yard scoring run, which came one play after a 20-yard run by the quarterback, made it 44-7 DuBois late in the third quarter.

The Beavers led 37-0 at halftime thanks to Henery’s 28-yard scoring run, all three of Adams’ touchdowns, and a 24-yard Hays to Derraick Burkett touchdown pass.

Hays was 4 of 62 passing for 62 yards and the two touchdowns while adding 15 yards rushing on four carries.

KARNS CITY, Pa. – Jayce Anderson and Luke Garing each scored a pair of touchdowns to lead Karns city to a 41-12 win over visiting Kane.

Micah Rupp also caught a 32-yard touchdown pass from Eric Booher in the opening half, while Luke Cramer scored on a 1-yard run in the third quarter.

Booher was 6 of 10 passing for 64 yards with Rupp catching five passes for 61 yards.

Ricky Zampogna scored both of Kane’s touchdowns and ran 11 times for 83 yards and two scores while going 20 of 31 passing for 167 yards and an interception.

Ashton Kahle got the scoring started for Redbank Valley when he returned a punt 72 yards for a touchdown, his fourth punt return for a score this season, and his second in as many weeks.

Shreckengost ran 11 times for 336 yards with Mansfield leading the Bulldogs with the one carry for 56 yards. Mangiantini three carries for 36 yards.

Mangiantini also threw a 5-yard touchdown pass to Neiswonger for the game’s final score, while Bain, who scored on a 1-yard run, his only run of the game, hit Gardlock with a 13-yard scoring pass and Ortz with a 26-yard scoring pass.

It was one of the lone bright spots for Cross, who was 4 of 12 passing for 62 yards while losing 16 yards rushing on seven carries.

Oct. 8, 2021 D10 Football: Farrell Rolls in D10 Title Game Rematch; Warren, Hickory Rally for Wild Wins
Coudersport Scores 24 Unanswered Fourth-Quarter Points to Stun Otto-Eldred
This website or its third-party tools process personal data.In case of sale of your personal information, you may opt out by using the link Do not sell my personal information.
×
Manage consent