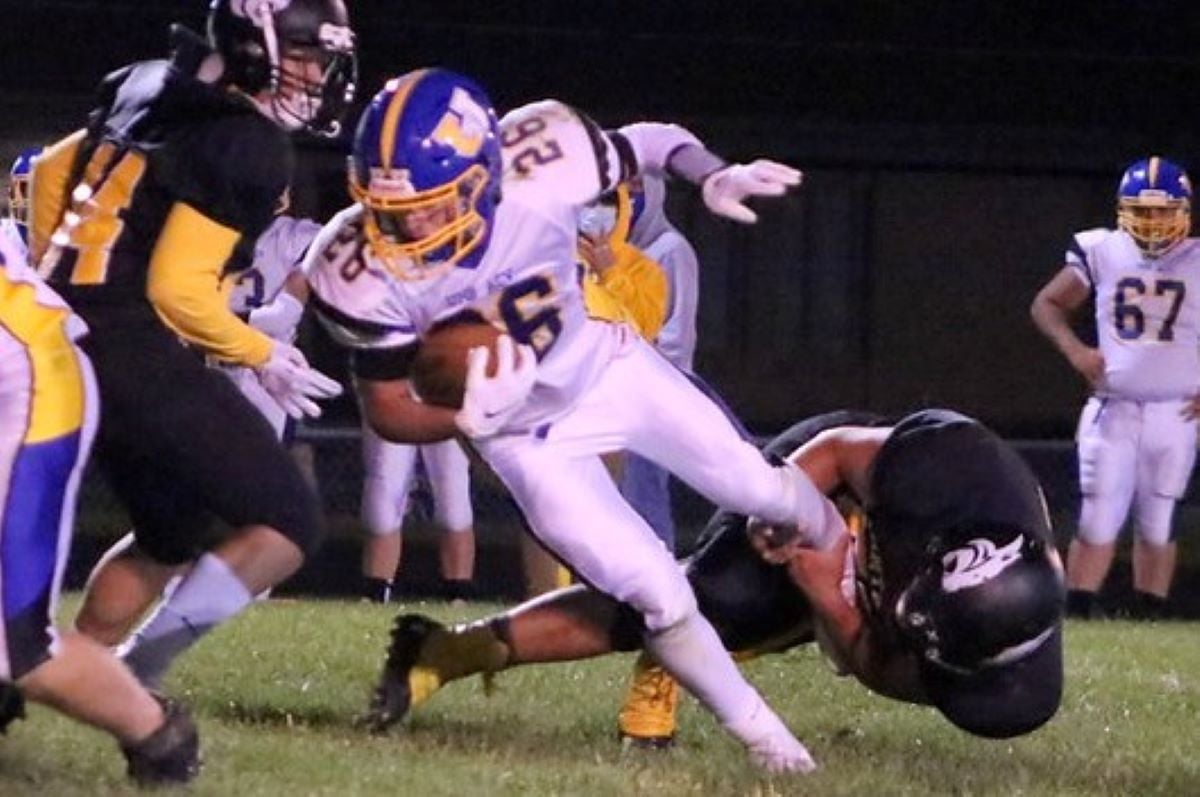 Caden Rainey had a 53-yard touchdown catch on a screen pass that helped turn momentum for Union/A-C Valley. Photo by Shelly Atzeni. Check out more of Atzeni's work here

The Falcon Knights (5-1) overcame five turnovers – one of which was returned for a touchdown – a kickoff return for a touchdown, a blocked punt that set up another touchdown, and an 18-0 hole to beat homestanding and previously unbeaten Keystone (5-1), 26-24 Thursday night.

Union/A-C Valley did it by playing great defense, getting a defensive score of its own, generating just enough big plays, and being more disciplined than its opponent.

Let’s take a look at each of those.

Keystone managed just 173 yards of total offense, including only 29 on the ground, with 143 of those coming on four plays, including an 80-yard touchdown pass midway through the fourth quarter that set the final score.

But even after surrounding the 80-yard bomb by Bret Wingard to Tyler Albright, the Union/A-C Valley defense was able to stop the two-point conversion play, which turned out to be an Albright run after he lined up in the Wild Cat and thought about throwing to Wingard.

The Falcon Knights were particularly stingy in the second half allowing the Panthers just nine rushing yards and 101 total yards despite the 80-yard pass play. Keystone had only three second-half first downs and six for the game.

With Union/A-C Valley trailing 18-14 in the fourth quarter, Skyler Roxbury honed in on an overthrown pass by Wingard, picked it off at the Panthers’ 25-yard line, and wove his way into the end zone to put the Falcon Knights ahead, 20-18, with 8:03 to play, a lead they never relinquished.

FALCON KNIGHTS GET TWO BIG PLAYS TO TURN THE TIDE

Trailing 18-0 following a 1-yard Wingard touchdown run after the blocked punt just over three minutes into the second quarter, Union/A-C Valley was able to get a couple of big plays that turned the momentum.

The first came late in the opening half when Bailey Crissman, under intense pressure on third-and10 from his own 40 with just over two minutes to play in the second quarter, threw a ball up for grabs that Roxbury caught for a first down at the Keystone 33-yard line.

It was a combat catch for Roxbury, who battled Wingard for the ball.

A few plays later, backup quarterback Trey Fleming hit Ryan Cooper from 12 yards out to close the gap to just 12, 18-6, at halftime.

Then, midway through the third quarter, Caden Rainey caught a screen pass from Crissman on a third-and-8 play from the Union 47 and turned it into a 53-yard touchdown that coupled with the 2-point conversion made it 18-14 with 6:20 to play in the quarter.

Keystone’s Drew Slaugenhaupt was right there with Rainey but appeared to think the pass was incomplete stopping on the play as Rainey ran past him and then the rest of the Panthers’ defense for a touchdown.

FALCON KNIGHTS KEPT THE FLAGS TO A MINIMUM

Union/A-C Valley was whistled for just four penalties for 41 yards.

That was the amount Keystone got on the kickoff following a 3-yard Mikey Card run that put the Falcon Knights ahead 28-20 with 5:24 to play.

Keystone would have had the ball around midfield but a sideline infraction and then an unsportsmanlike conduct penalty pushed the ball all the way back to the 20-yard line (ironically that led to the 80-yard scoring pass for the Panthers).

But penalties were a major issue for Keystone all night, as the Panthers were flagged 14 times for 128 yards, none more costly than a ticky-tack – at best – defensive pass interference call with around 2:45 to play on a ball that Albright picked off at the Union/A-C Valley 40-yard line and returned to the 30-yard line.

Albright barely – if at all – made contact with Rainey on the play. But Rainey, trying to come back for the football, fell down and the officials must have decided Albright helped along the way.

That penalty allowed Union/A-C Valley to run out all but 28 seconds on the clock to secure the win.

As stated above, the Panthers didn’t generate much offense but they found other ways to score, including a pair of Kyle Nellis returns.

Nellis returned the opening kickoff 75 yards for a touchdown – he bobbled the ball at first which may have led to Union/A-C Valley’s coverage team getting out of their lanes.

Nellis then made it 12-0 late in the first quarter when he picked off a Crissman pass and went 47 yards for a touchdown.

Keystone made it 18-0 on the 1-yard run by Wingard with 8:49 left in the opening half on the first play after Nick Cosper blocked a Crissman punt and Keystone recovered at the 1-yard line. Crissman had trouble fielding the snap cleanly on the block.

Union/A-C Valley had trouble holding onto the football in the opening half fumbling four times, losing three of them, to go with the interception.

In all, the Falcon Knights lost the turnover battle, 5 to 1, with three lost fumbles but still won the game.

Keystone now has to go on the road to one-loss Smethport Friday, Oct. 15, while Union/A-C Valley travels to Cameron County Thursday, Oct. 14.

D9 football Week 7: Brookville Raiders visit High-Flying St. Marys Flying Dutchmen
D9and10Sports.com to Broadcast Moniteau at DuBois Football Powered by Boben Excavating & Construction of West Sunbury, Northwestern at Eisenhower
This website or its third-party tools process personal data.In case of sale of your personal information, you may opt out by using the link Do not sell my personal information.
×
Manage consent