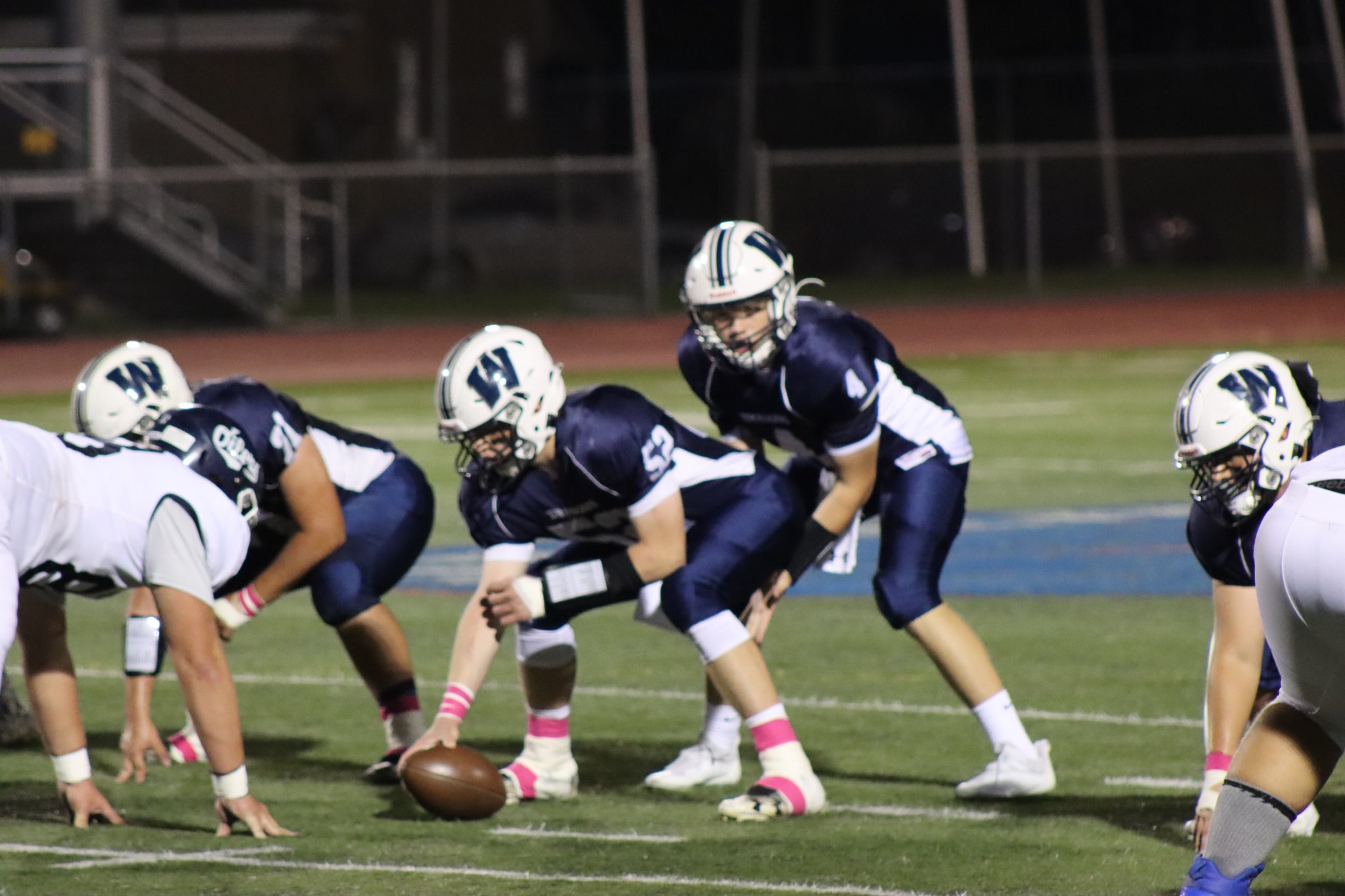 Warren's Eric Dippold gets set to take a snap from Luke Becker. Photo by Jon Sitler.

NEW WILMINGTON, Pa. – After falling to Wilmington three times last season, the Farrell Steelers were itching for the chance to face off with the Greyhounds again.

The Steelers (5-0) did so in dominant fashion on Friday, racing to a 54-0 win. On the season, they have now outscored their opponents 276-6.

Anthony Stallworth had another stellar performance for the Steelers, rushing for 229 yards and three scores – the first three touchdowns of the game all on runs of at least 44 yards as the Steelers built a 38-0 halftime lead, also thanks in part to a Taidon Strickland fumble return for a touchdown.

Farrell also showed off an impressive passing game, as Trian Holden tossed a 33-yard strike to Dwight Allen to cap the first-half scoring.

In the second half, Kylon Wilson broke free on an 80-yard touchdown run.

Ben White was at it again for the Dragons (4-3), catching a pair of touchdowns passes – one from Tommy Nyquist and the other from Eric Dippold. Those scores came at the 2:22 mark of the third quarter to get the Dragons on the board and at 7:39 of the fourth quarter, that, coupled with an extra point, made it an 18-13 game.

The Dragon defense shut down Ethen Knox and Oil City (3-3) in the second half, and got the ball back late in the fourth quarter, with a Dippold to Kody Vega 9-yard touchdown pass giving them a 19-18 lead with 2:22 to play in the fourth quarter. Dippold completed the 2-point conversion pass to Gage Shaffer, and the Dragon defense held Oil City to preserve the comeback win.

Dippold was perfect passing in the fourth quarter.

The Dragons overcame a big first-half from Knox. A week after breaking the Oilers’ single-game rushing record in a win over Franklin, Knox rushed for a pair of first-half touchdowns on runs of four and five yards, with the Oilers converting two-point conversions on both scores to make it 16-0.

Knox finished with 210 yards on 41 carries for Oil City.

SLIPPERY ROCK, Pa. – The Hickory Hornets rallied from a 10-point fourth-quarter deficit, stunning unbeaten Slippery Rock in the games’ final moments, as Logan Woods connected with Jackson Pryts on a one-yard touchdown pass with one second remaining to lift them to a 27-23 in the Region 3 showdown.

Woods scored on a 2-yard touchdown run with 3:55 to play, and the Hornets were able to make a defensive stand to get the ball back.

It was a back-and-forth affair, as Hickory (5-2) jumped out to a 13-0 lead before Slippery Rock rattled off the next 23 points.

The Rockets rallied to tie the game at halftime, as Brett Galcik caught a two-yard touchdown pass from William Mokel and Ryan Montgomery scored on a one-yard plunge.

The Rockets took their first lead of the game at the 2:31 mark of the third quarter when Mokel scampered in from six yards out.

Woods threw for 169 and ran for 13, accounting for the three total touchdowns, while Pryts had 84 yards receiving.

Mokel threw for 120 yards and ran for 17 more for the Rockets.

Hohman threw a pair of touchdown passes to Joey Hathaway covering 44 and 10 yards, and it was his 15-yarder to Anthony Pereira that actually got the scoring going.

Titusville (2-3) scored on a 49-yard pass from Garrett Knapp to Antonio Malave.

Hohman finished with 169 yards through the air for the Eagles, while Hathaway had 68 yards receiving.

Knapp threw for 202 yards for the Rockets.

Ryan Tewell had another stellar performance for the Wildcats (5-0) to remain unbeaten, throwing for 243 yards and four touchdowns and also had 52 yards on the ground and a score.

Jake Kelley notched an interception for Northwestern and they were well on their way, as Tewell punched it in on the ground.

Tewell tossed a 60-yard touchdown pass to Came Perkins and Perkins had an interception on the ensuing Eisenhower drive that led to a Jordan Dohanic 10-yard run that made it 20-0 Wildcats at halftime.

Tewell tossed a touchdown pass to Eric Steinle to open the second-half scoring, and the duo hooked up again on the ensuing drive to make it 35-0 and put the mercy rule into effect.

Logan Stagl had a 52-yard touchdown pass from Steinle and capped the scoring with an 85-yard pick six.

Benji Bauer made sure the Knights (4-2) wouldn’t be shut out, scoring on a 32-yard run. Bauer rushed for 151 yards for the game.

The trio of Khalon Simmons, Brady Walker and Griffin Buzzell was at it again for the Bulldogs. Simmons scored four rushing touchdowns in the first half for the Bulldogs (5-2), while Walker had touchdowns scampers of 28, seven and 20 and Buzzell added two more scores, including a 29-yarder.

The two teams traded touchdowns in the opening 12 minutes, as Morsillo scored on a 2-yard run and connected with Davon Jones on a 22-yard score.

Cooper Baxter also ran for two touchdowns and threw for two for Butler (3-3). His eight-yard scoring run put the Golden Tornado on the board in the first quarter, and Max Schnur’s 65-yard strike to Ethan Trettel gave them a brief lead.

Baxter’s 5-yard run in the second quarter gave the Golden Tornado a 21-14 lead, but Kai’Ron Collins returned the ensuing kickoff 82 yards for a touchdown and Morsillo scored on a two-yard run with 19 seconds to go before halftime to make it 30-21.

Westinghouse extended its lead to 37-21 when Davon Fennell returned the second-half kickoff 60 yards for a score.

Baxter threw a 54-yard touchdown pass to Trettel and connected with Blaze McCandless on a 10-yard score, but Westinghouse was able to put it away on Morsillo’s 36-yard touchdown to Malik Harris.

Baxter finished with 99 yards rushing and 85 yards passing for Butler, while Trettel had 150 yards receiving.

Logan Turton scored on a six-yard run late in the first quarter for the Mustangs (3-3) and Daemyin Mattocks broke loose on a 30-yard score early in the second quarter to give them that 13-0 lead.

Gavin Murdock, who was injured for Lakeview (1-5) last week, responded with an eight-yard scoring run to make it 13-6 going into halftime.

Turton capped his strong night by hauling in a touchdown pass from Ethan Wiley with just over eight minutes to go in the game.

HARBORCREEK, Pa. – A pair of Matt Cassidy touchdown runs in the first half proved to be all Harbor Creek needed in a 13-6 Region 5 win over General McLane.

In the process, the Huskies snapped their 5-game losing streak.

Harbor Creek (2-5) led 13-0 before John Amon connected with Owen Martin on a 15-yard strike to make it 13-6 in the second quarter. Those were the final points either team scored in the game.

WATERFORD, Pa. – Fort LeBoeuf raced out to a 28-0 lead after the first quarter and never looked back in a 56-0 win over Girard.

A total of six different Bison (5-1) players found the end zone on the ground, with Justin Leuschen and Tristin Harris scoring two touchdowns each.

Harris scored on a pair of 61-yard runs and Leuschen on runs of 49 and five yards. For the game, Harris led the way with 150 yards on the ground.

Aiden Lesik, Ryan Welka, Adam Lichtinger and Donovan Davis all scored as well for the Bison.

Swartz once again surpassed 100 yards on the ground, going for 117, while Ritzert had 130 yards through the air.

Brayden McCloskey had a combined 160 yards of total offense for Reynolds as well.

The Tigers (4-2) have now surrendered eight points or fewer in each of their four wins this season.

Ben Gilberto got the scoring going for the Tigers with a 17-yard touchdown run in the first quarter.

The only other touchdown of the game came in the second quarter when Logan Kennedy broke loose on a 23-yard run.

SHARON, Pa. – Sharon’s Mikey Rodriques accounted for four total touchdowns as the Tigers rolled to a 48-21 win over Conneaut (Ohio).

Rodriques threw for 200 yards and three scores and added a touchdown on the ground as well.

Rodriques connected with his top target, Ja’on Phillips on a pair of touchdowns covering 30 and 35 yards. His third toss came by way of CC Harrison.

Jayveeth White surpassed 100 yards on the ground and added a pair of rushing touchdowns.

ERIE, Pa. – McDowell followed up a big win over rival Cathedral Prep with a 44-0 triumph over Hollidaysburg.

Ray Jackson and Bryce Wood caught touchdown passes from Moore, while Matthew McGregor had two touchdowns – one a reception and the other of the defensive variety.

Zach Yoder was actually the leading ground-gainer for the Panthers (2-3), toting the ball for 109 yards while also returning a kickoff for a touchdown. Schaff finished with 92 yards on the ground.

There was an offensive fireworks display over the final 12 minutes. Seneca led 8-6 after the third, with Saegertown outsourcing the Bobcats 20-16 in the fourth quarter.

Nolan Seabury had a strong game in defeat for the Bobcats (1-5), combining for over 300 yards of total offense and a touchdown run.

Collin Libra also had a kickoff return for a touchdown for the Bobcats.

ERIE, Pa. – Mercyhurst Prep outscored Pymatuning Valley 21-0 in the second quarter on its way to a 27-8 win.

On the ground, Bridgett and Bahm accounted for touchdowns.

Bahm accounted for 270 yards of total offense in the win, while Dewey Byrd had 115 yards receiving for the Lakers (3-2).

District 9 and District 10 Football Live Scoreboard – Week 7 2021 (Oct. 7-9)
Oct. 8, 2021 D9 FB: Clearfield Runs Shutout Streak to 12 Quarters; McGarry, Terry Set Records in Cville Win; Punxsy Gets First Victory
This website or its third-party tools process personal data.In case of sale of your personal information, you may opt out by using the link Do not sell my personal information.
×
Manage consent