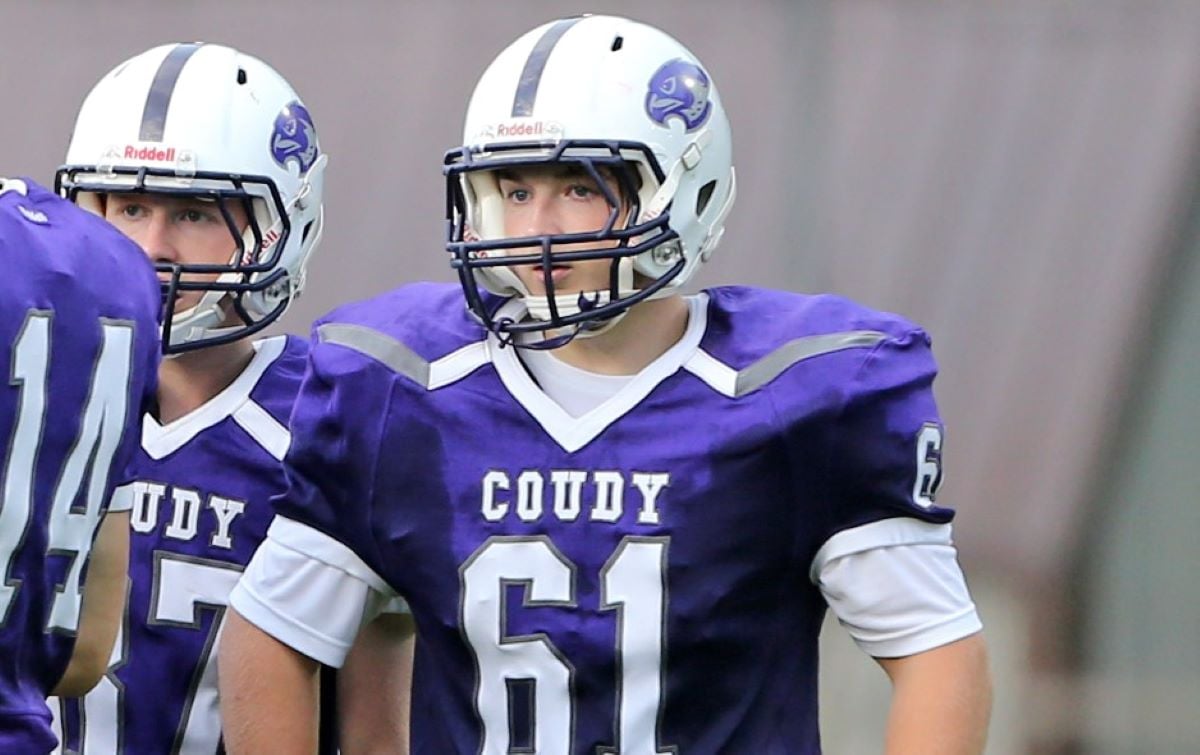 Dylan Hajzus forced the fumble that Gavyn Ayers returned for a touchdown to help Coudersport finish off a comeback from 22 down in the 4th quarter. Photo by Paul Burdick. Check out more of Burdick's work here

COUDERSPORT, Pa. – Trailing by 22 midway through the fourth quarter, Coudersport staged a comeback for the ages that included a pair of defensive touchdowns to stun visiting Otto-Eldred, 30-28.

Ayers returned a Gavin Jimerson fumble 33 yards for a touchdown and Logan Ruter ran in the two-point conversion with just over three minutes left to complete a comeback from down 28-6 by the Falcons.

Dylan Hajzus forced the fumble that Ayers scooped and scored on.

It was the second consecutive defensive touchdown for Coudersport (2-2 D9 League Small School North, 3-3 overall) in the final five minutes of the contest, as Xander Brown returned an interception for a score with just over four-and-a-half minutes left and then ran in the two-point conversion to get the Falcons within six, 28-22.

The Terrors led 8-6 at halftime thanks to a 25-yard Ryan Love touchdown run in the first quarter before scoring the first three touchdowns of the second half.

Jimerson tossed a 28-yard scoring pass to Chance Palmer to make it 14-6 in the third quarter before Palmer scored on a 6-yard run early in the fourth quarter to make it 22-6.

Ethan Ott’s 18-yard scoring run in the second quarter got Coudersport on the board.

Ott led the Falcons with 71 yards rushing on 10 carries with Brown adding 34 yards on nine totes and Ayers 32 on 18. Ayers was also 5 of 13 passing for 82 yards and an interception. Culvey had three catches for 98 yards and the touchdown and also made nine tackles on defense.

Hajzus backed up his key fumble caused with nine tackles and a sack.

Jimerson was 5 of 14 passing for 78 yards and the touchdown, while Hunter App threw the interception.

Max Splain had the interception for Otto-Eldred.

Oct. 8, 2021 D9 FB: Clearfield Runs Shutout Streak to 12 Quarters; McGarry, Terry Set Records in Cville Win; Punxsy Gets First Victory
Smethport Claims D9 League Small School North Division Title
We use cookies on our website to give you the most relevant experience by remembering your preferences and repeat visits. By clicking “Accept All”, you consent to the use of ALL the cookies. However, you may visit "Cookie Settings" to provide a controlled consent.
Cookie SettingsAccept All
Manage consent