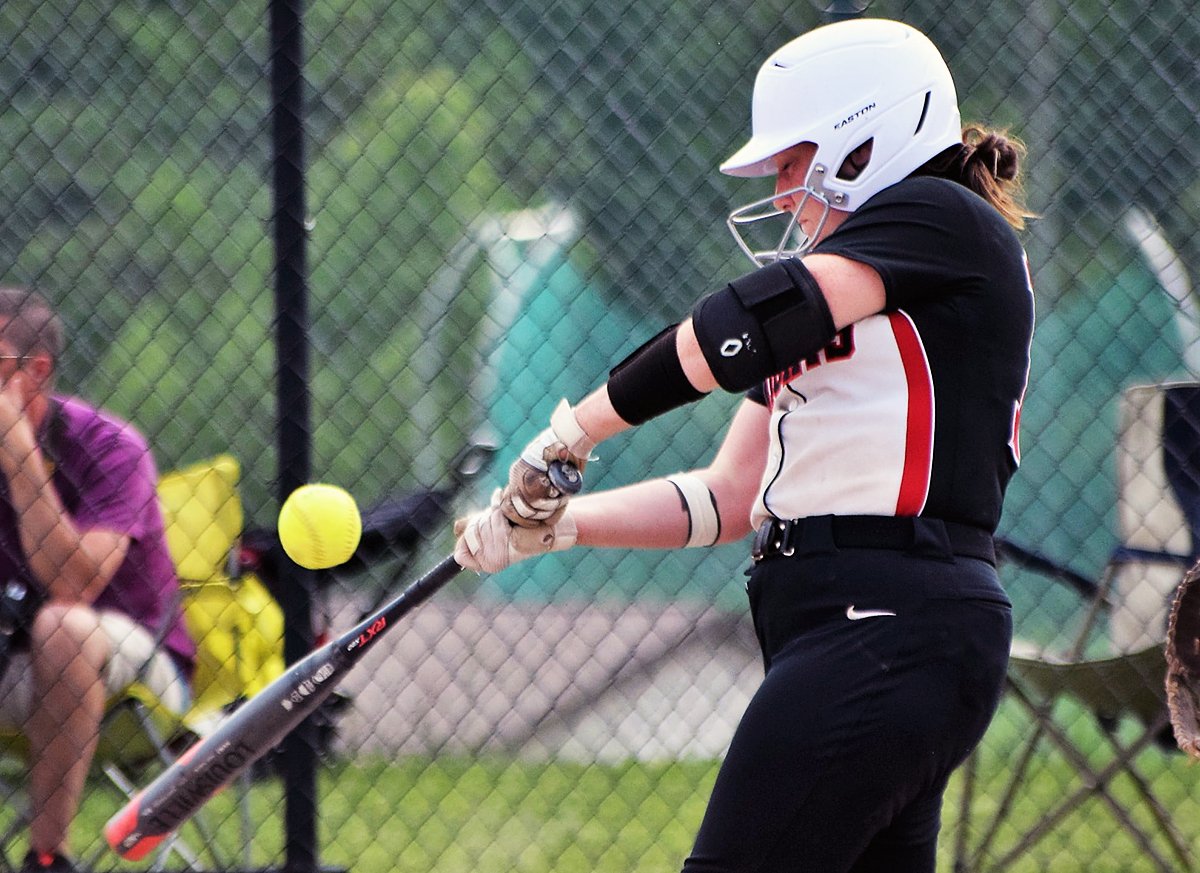 The Knights had a 2-1 lead with two outs in the seventh before allowing the tying run to score. Franklin pushed a run across in the top of the eighth and allowed the potential tying run to reach third in the bottom of the inning before a pair of defensive plays and a strikeout put the game away. The Knights had to hold off a late rally from Warren in a similar fashion in the quarterfinals.

Syndi Hoobler singled to start the eighth and moved to third on Erin Janidlo’s ground out. Kaylyn Fry’s RBI single brought Hoobler in for what would become the game-winning run.

Carlie Miller hit a leadoff double to start the Hornets half of the inning and advanced to third on the throw. Kaelyn Fustos put down a squeeze bunt, but Miller was picked off at third. Fustos stole second but would get no farther as Alyssa Lenzi flew out and Jaclyn Fustos struck out to end the game.

The Hornets tied the game with a 2-out rally in the seventh. Kaitlyn Gilliland drew a 1-out walk and courtesy runner Jordyn Hanzelka stole second but couldn’t advance on Malaiah Burns’ ground out. Koerth walked and Ella Holland singled. An error on the play allowed Hanzelka to score and tie the game at 2-2. Hickory had the winning run on third base, but Hallie Miller grounded out to send the game to extra innings.

Kendra Koerth singled to lead off the third, stole second and, with two outs, scored on an error to put the Hornets ahead, 1-0.

Franklin took the lead in the sixth. Autumn Fitzgerald hit a 1-out double and Hoobler followed with a single and advanced to second on the throw to third. Janidlo brought both runners in with a single to right to give the Knights a 2-1 lead.

Holland and Miller each had two hits in the loss. Miller gave up three earned runs on seven hits with two walks and three strikeouts.

Hoobler and Trinity Edge each had two hits. Hoobler scored twice and Janidlo drove in a pair.

Franklin will take on Villa Maria on Monday for the District 10 title.

VILLA MARIA 5, FORT LEBOEUF 2
ERIE – A 3-run fifth inning proved to be the difference as Villa Maria beat Fort LeBoeuf, 5-2, in their District 10 Class 4A semifinal.

The Victors took advantage of seven Bison errors in the contest, including a pair in the pivotal fifth inning.

Fort LeBoeuf took advantage of Villa’s mistakes to strike in the first inning. Mackenzie Kulik and Ally Hiltabidel both reached via error to put runners on the corners, then Kulik came home on another error to give the Bison a 1-0 advantage. Jordan Popowski and Kendal Stull hit back-to-back singles to load the bases, but Villa got out of the jam without allowing another run thanks to a fielder’s choice force out at home and a double play.

Jenna Wagner tripled to start the fourth and came home on Rylee Kregel’s sac fly to center to tie the game at 1-1.

The Bison got that run back quickly in the home half of the inning as Stull hit a leadoff triple and Amanda Bentley followed with an RBI double to cut the lead to 5-2.

Stull was 3-3 for the Bison with a run scored. She gave up five runs, one earned, on seven hits with a walk and a strikeout.

Wagner had a pair of extra base hits and allowed two runs, one earned, on six hits and a walk with seven strikeouts in the win.

FAIRVIEW 13, CORRY 11
ERIE – Fairview and Corry took turns plating runs, at least one run was scored in every inning, but in the end, it was the Tigers who came away with a 13-11 win over the Beavers in their District 10 Class 3A semifinal.

In a game of offense, it was the two scoreless innings that made the difference. Fairview was able to keep Corry off the board in the fifth and sixth innings after the Tigers had scored a run in each themselves, which proved to be the final margin.

The Tigers came right back with a 4-run fourth and held the Beavers to just one run in the frame to head to the fifth with a 9-8 advantage.

Fairview added two more runs in the seventh to go up 13-8. Corry was able to get three across in the bottom of the inning, but no more as the Tigers held on for the victory.

Jenna Hanas, Deena Masterson and Julia Golden all had three hits. Emma DiStefano had three RBI, while Hanas drove in a pair. Hanas, DiStefano and Taylor Polach all tripled as well.

Hailey Komisarski got the win. She allowed seven runs, two earned, on seven hits with four walks and three strikeouts in five innings.

The Tigers will take on Jamestown for the D10 crown on Monday.

JAMESTOWN 10, NORTH EAST 0, 6 INNINGS
SLIPPERY ROCK, Pa. – Dani Ficeti was masterful in the circle and the offense did its job as Jamestown defeated North East, 10-0, in six innings in their District 10 Class 3A semifinal.

An error and three hits started the scoring for Jamestown. After Reese Schaller reached on an error, Kiley Matters doubled, Ficeti singled and Josie Pfaff doubled to make it 3-0 Muskies.

That would be more than enough for Ficeti who scattered two hits, walked one and struck out one.

Jamestown added two more in the fourth. With one away, R Zajac doubled and M Floch singled to put a pair of runners on. One out later, Matters ripped a double into left to bring in both runs and give the Muskies a 5-0 advantage.

A 3-run fifth extended Jamestown’s lead. Pfaff led off with a double and Liz Kammerdiener reached on a bunt single before Morgan Bercis singled. An error on the play allowed Pfaff to score. Kalani Spurlock put down a squeeze bunt to score Kammerdiener, then Rieane Zajac’s ground out brought in Bercis to make it 8-0.

The Muskies finished the game in the sixth. Matters reached on an error with one out, then Ficeti doubled and Pfaff was walked to load the bases. Kammerdiener drove a ball into center for a 2-run double and the 10-0 win.

Jamestown will face Fairview on Monday for the D10 title.