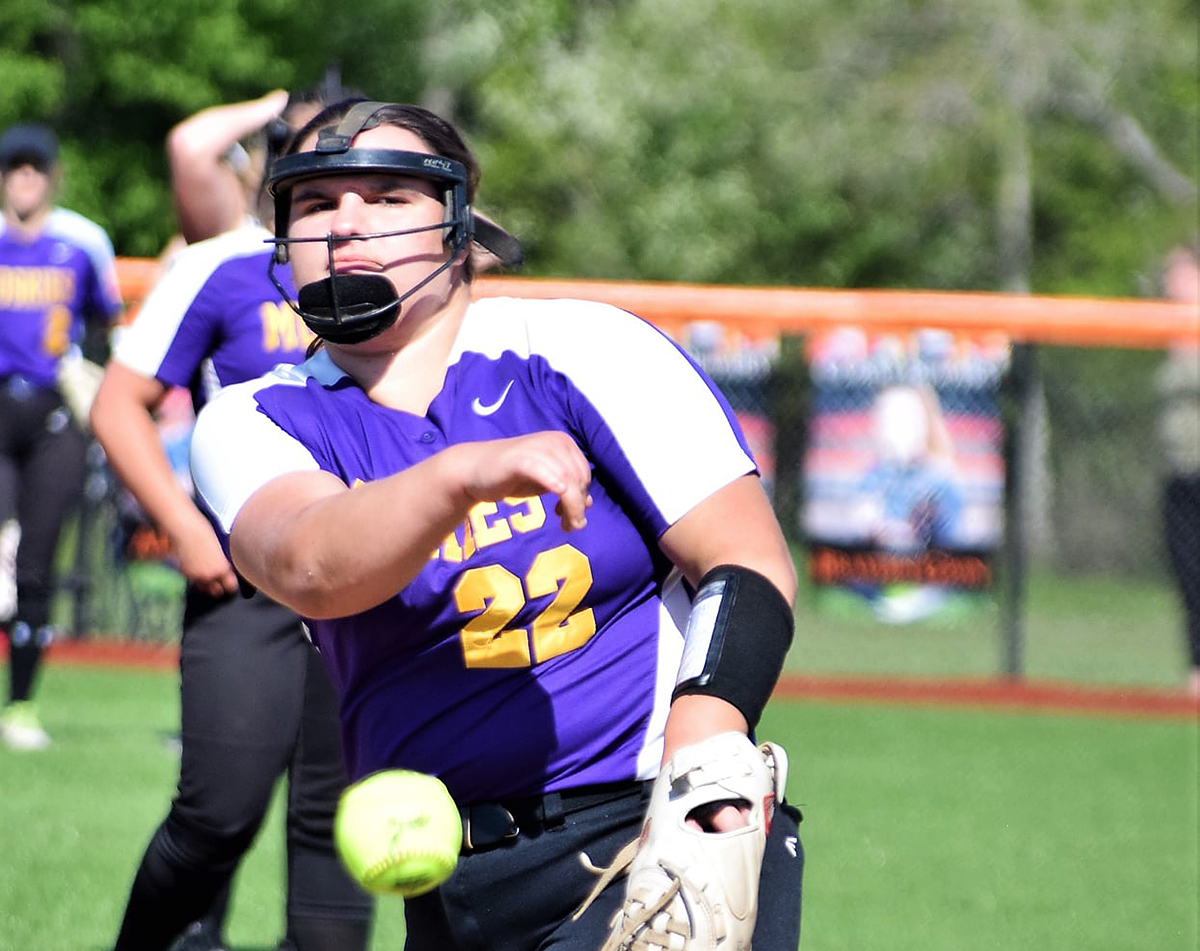 FRANKLIN 5, WARREN 4
MEADVILLE, Pa. – Trinity Edge came up big, offensively and in the circle, when Franklin needed her most as the Knights topped Warren, 5-4, in their District 10 Class 4A quarterfinal.

With the game tied at 3-3 in the fifth, Edge powered a 1-1 pitch over the centerfield wall for a 2-run home run that proved to be the deciding run in the win. Then, with one out and the tying run in scoring position in the bottom of the seventh, she got Lexi Hoffman and Carly Beers to strike out to end the game and send Franklin to the semifinals.

Sydni Hoobler led off the game with a bunt single and moved to second on an error. Erin Janidlo followed with an RBI-single to put the Knights ahead, 1-0.

Warren answered with a run of its own in the bottom of the inning. Katie Madigan put down a bunt single and moved to second on the throw to first. She came home on a passed ball with Rylie Yeager at the plate. Yeager walked, then went to second on Kelsey Stuart’s single. One out later, Alex Neureiter drew a walk to load the bases.

Edge got Hoffman and Beers to strike out to end the threat.

Hoobler got things going for the Knights again in the third. She led off with an infield single, then moved to second on Janidlo’s sac bunt. Kaylyn Fry’s sac fly to right brought in Hoobler to put Franklin ahead 2-1.

The Dragons responded with a pair in their half of the inning. Yeager reached on an error to start the frame and Stuart walked. The runners moved to third and second on Alix Lytle’s sac bunt, then came home on Neureiter’s single to right to put Warren ahead, 3-2. Hoffman followed with a single, but Edge was able to get Beers on a foul tip strikeout and Ellee Irwin to ground out to limit the damage.

Hoobler doubled to start the fifth, then moved to third on an error. Fry’s 1-out single brought in Hoobler to tie it at 3-3. Edge followed with a 2-run homer to center to put the Knights back on top, 5-3.

Warren cut the deficit in half in the sixth. With two outs, Madigan singled, then Yeager followed with a double to plate Madigan and make it 5-4. Stuart reached on an error, but Yeager was thrown out at the plate trying to score on the play to end the inning.

Franklin threatened again in the seventh when Edge ripped a 2-out triple to right. Stuart was able to get Brandy Atwell looking to keep it a 5-4 game.

Madigan had two of Warren’s six hits and scored twice. Neureiter drove in a pair and Yeager had a run scored and an RBI.

Stuart took the loss, as she allowed five earned runs on 10 hits. She didn’t walk a batter and struck out 12.

Edge and Hoobler both went 3-4 at the plate. Edge had two RBI and a run scored, while Hoobler scored three times. Fry also drove in a pair for the Knights.

In the circle, Edge gave up four runs, three earned, on six hits and four walks. She struck out 10.

Franklin will face Hickory/General McLane in the semifinals on Thursday at a time and location TBD.

Both teams scored their run in the first, then combined for just two more hits until Zalac’s base knock in the seventh.

With one out in the first, Samantha Meredith singled to left. Ciana D’Antoni grounded into a fielder’s choice, with Meredith out at second, then moved to second on an error. Paige Gresgott singled in D’Antoni to put the Rockets up 1-0.

Jamestown answered in the bottom of the inning. Reese Schaller reached on an error, then stole second and third before coming home on Kiley Matters’ single to tie it at 1-1.

Dani Ficeti scattered three hits through seven innings with no walks and seven strikeouts. The run she allowed was unearned.

Gresgott took the tough-luck loss for the Rockets. In 6 2/3 innings, she gave up two runs, both unearned, on three hits and three walks and struck out six.

Jamestown will take on North East, a 10-1 winner over Girard, in the semifinals on Thursday at a time and location TBD.

CORRY 5, HARBOR CREEK 4
ERIE – A 3-run sixth inning was just enough for Corry as the Beavers held off a late Harbor Creek rally to come away with a 5-4 win in their District 10 Class 3A quarterfinal.

The Beavers were leading 5-2 heading to the bottom of the seventh. Consecutive 1-out singles by Catherine Burkett and Rylee Vogt had runners on first and second for the Huskies. Maura Benim’s 2-out, 2-run single brought the runners home and ended with Benim standing on third base representing the tying run. Lexi Frisina got Baileigh Bleil to pop out to catcher Mackenzie Spence on the first pitch she saw to end the game.

In the sixth, Jayda Martin drew a leadoff walk and moved to second when Haylee Dyne reached on an error. Kiran Bugbee’s single loaded the bases. Martin scored on a sac fly. Then, with two outs, Reghan Trask tripled to right to plate Dyne and Bugbee to make it 5-2 Beavers.

Georgia Weber tripled to start the second, then came home on Kylie Pinetti’s sac fly to put Harbor Creek up, 1-0.

Corry first took the lead in the fourth. Braydin Gwin drew a leadoff walk, and one out later Dyne tripled her home to tie it at 1-1. Dyne scored as Bugbee reached on an error to give the Beavers a 2-1 advantage.

The Huskies answered right back in the home half of the inning. Weber hit a 1-out single and stole second. An error on the play allowed Weber to scoot home and tie it at 2-2.

Benim had three hits and two RBI, while Weber had two hits and scored two runs.

Frisina gave up four earned runs on nine hits. She didn’t allow a walk and struck out six.

Corry will face Fairview in the semifinals on Thursday at a time and location TBD.

HICKORY 5, GENERAL MCLANE 3
SLIPPERY ROCK, Pa. – General McLane brought the go-ahead run to the plate in the seventh inning, but Carlie Miller struck out the final two batters to give Hickory a 5-3 win in their District 10 Class 4A quarterfinal.

Hickory scored all five of its runs in the first two innings. With one out in the seventh, Lilli Mook and Haven Teed hit consecutive singles to put runners on first and second. They would get no further as Carlie Miller got Catrina Miller and Elena Halmi to strike out swinging to end the game.

The Lancers got on the board in the first. Catrina Miller reached on an error and, one out later came home on Bailey Cannon’s triple to center. Cannon came home on an error to put GM up 2-0.

The Hornets answered in the bottom of the inning. Ella Holland hit a leadoff single then came home on Carlie Miller’s 1-out double. Kaelyn Fustos followed with an RBI single to tie it at 2-2.

Herberg led off the fourth with a home run for the final run of the game.

Cannon and Herberg each went 2-3 with a run and an RBI. Cannon took the loss as she allowed five runs, four earned, on 13 hits and three walks with six strikeouts.

Hallie Miller finished with three hits, while Carlie Miller, Fustos and Burns had two each.

Hickory will face Franklin in the semifinals on Thursday at a time and location TBD.

VILLA MARIA 15, GROVE CITY 0, 4 INNINGS
ERIE – Jenna Wagner was perfect, both in the circle and at the plate, and the offense took care of the rest as Villa cruised to a 15-0, 4 inning win over Grove City in their District 10 Class 4A quarterfinal.

Wagner didn’t allow a single Eagle to reach base through four innings and struck out six. She was also 3-3 at the plate with a home run, two doubles, two runs scored and two RBI.

The Victors scored seven runs in the first, five more in the second and three in the fourth to put the game away.

Haley Dever was a perfect 4-4 with two triples, two runs scored and three driven in, while Annabella Cipalla and Emalie Thomas each had three RBI, including a 2-run homer for Thomas-and Madison Hess drove in a pair.

Villa will face Fort LeBoeuf in the semifinals on Thursday at a time and location TBD.

NORTH EAST 10, GIRARD 1
ERIE – A 5-run fifth inning broke the game open as North East came away with a 10-1 win over Girard in their District 10 Class 3A quarterfinal.

Cadence Jones and Delaney Prather combined for six hits and seven RBI to pace the offense, while Prather was dominant in the circle with 15 strikeouts.

With a 4-1 lead in the fifth, Karlee Stetson drew a leadoff walk and Alexis Rizzo followed with a double. Terria Steele, who entered as a courtesy runner for Stetson, scored when Miranda Shafer reached on an error. Rizzo scored on Cozzens Alex’s ground out to short to make it 6-1. Following a Julianna Coletta walk, Prather hit a 2-run single to left to push the lead to 8-1. One out later, Jones blooped a single to right-center to bring in Prather and make it 9-1.

The Grapepickers got the scoring started early as Prather hit a leadoff double and Elle Blakeslee and Jones singled to put North East up 2-0 in the first.

With two outs in the second, Coletta reached on an error. Prather followed with a single and Blakeslee brought Coletta home with a single to make it 3-0 after two innings.

Girard caught some 2-out lightning of its own in the fourth. Kaylin Kohan doubled to left and courtesy runner Kayla Klimek came in on Danielle Adams’ single to center to cut the lead to 3-1.

North East countered with a run of its own in the bottom of the inning. Coletta hit a leadoff double but was still on second two outs later. Jones stepped in and ripped a single up the middle to bring in Coletta for a 4-1 advantage.

North East tacked on an insurance run in the sixth. Stetson reached on an error and Elizabeth Svetz singled to put runners on first and second. Shafer tried to put down a sac bunt, but Adams fielded the ball and fired to Taylor Williams at third to get the lead runner. Hannah Kemmet singled to right to bring in Svetz, but Shafer was thrown out trying to score on the play.

Prather finished 3-4 with a double and three RBI and a pair of runs scored at the plate. In the circle, she allowed one earned run on five hits with two walks and 15 strikeouts.

Jones was 3-4 with four RBI, while Coletta scored three times.

Kohan had two of Girard’s five hits in the game.

North East will face Jamestown in the semifinals on Thursday at a time and location TBD.

FAIRVIEW 17, SHARON 7, 6 INNINGS
MEADVILLE, Pa. – A 5-run fourth inning broke open what had been just a 2-run game as Fairview went on to defeat Sharon, 17-7, in six innings in their District 10 Class 3A quarterfinal.

Fairview had built a 7-1 lead through three innings, but Sharon came back to score four in the fourth to trim the deficit to 7-5. Fairview answered with five runs of its own in the bottom of the inning, then added two more in the fifth and three in the sixth for the final tally.

For Sharon, Iresha Norris and Ella Brown had two hits each. Brown and Lacy Root both drove in a pair.

Fairview will take on Corry in the semifinals on Thursday at a time and location TBD.