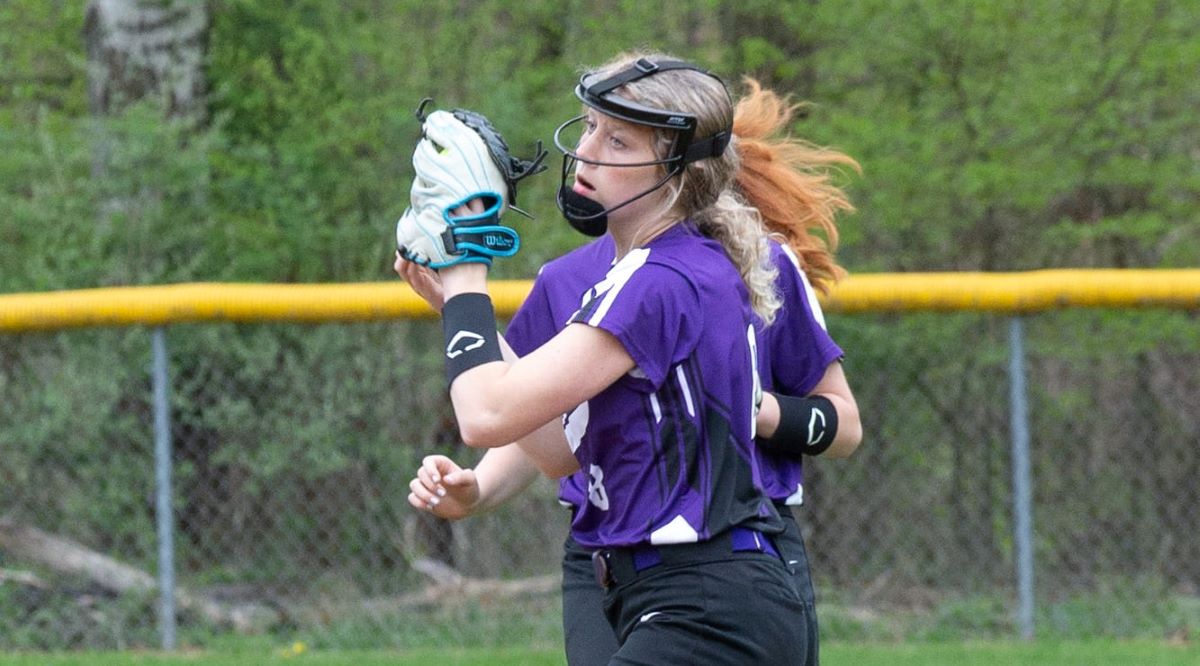 The Lady Falcons trailed 9-6 entering the bottom of the seventh but tied the game on steal of home by Madison Dubots-Angood after a double by Rosalyn Page and a hit by DuBots-Angood had gotten them within one.

With the bases loaded and one out and the game tied, Macy West then struck out Dylan Pierce before Gentzyel singled on the first pitch to win the game.

Oswayo Valley, which led 6-3 until Coudersport scored six in the bottom of the sixth to tie the game, had taken the 9-6 lead with three runs in the top of the seventh thanks to wildness from Savannah Myers.

Myers issued walks to four of the first five hitters she faced in the inning giving the Green Wave a 7-6 lead. Hannah Winseck then delivered a two-run single to center to make it 9-6.

But Myers worked out of a second-and-third, one-out jam without allowing another run by getting Makenzie George to ground back to the circle and West to pop out.

Coudersport had tied the game in the bottom of the sixth when two runs scored on a groundout by Pierce after a Kaylee VanWhy base hit had made it 6-4.

Anderson was 3-for-4 with a triple, a double, and two runs scored.

While Anderson was leading the hit parade, Alaina Hogue was doing work in the circle going six innings allowing an unearned run on three hits and no walks while striking out 12.

Andrea Meals had a hit and an RBI for A-C Valley with Colleen Verostek adding a hit and a run scored.

Courtney Stewart also had a big day at the plate and in the circle for the Lady Warriors going 4-for-4 with a double, a run scored, and an RBI and throwing a four-inning, one-hitter. She walked one and struck out nine.

Ava Gilmore had the lone hit for West Middlesex.

Aites went 2-for-3 with four runs scored and four RBIs while blasting a two-run home un in the second inning.

Also for the Lady Fires, Natalie Meyers went 4-for-4 with a double and two RBIs, Madison McFarland was 3-fro-4 with a triple, two doubles, three runs scored, and two RBIs, Chaise Siegel was 2-for-4 with a run scored and an RBI, Maggie Boehme scored three times, and Emma McFarland scored twice.

Morgan Lindemuth was 2-for-2 with a double and an RBI for Brockway.

While the offense was scoring, the pitching didn’t allow a hit in six innings of work for DCC.

Seven of DCC’s 13 hits went for extra bases with Mia Meholick hit a home run, Emma Suplizio collecting a triple and a double, and Chelsea Busatto a pair of doubles to lead the way.

Busatto also drove in six runs while going 3-for-3 with a walk and four runs scored.

Suplizio was 2-for-2 with two runs scored, and two RBIs, while Meholick was 1-for-3 with a walk and four runs scored.

Jessy Frank and Lauren Davidson both added three RBIs with Frank going 1-for-2 with two walks and two runs scored and Davidson going 1-for-3 with a double, a walk, and a run scored.

Madi Hoyt scored three times and went 2-for-2 with a double, a walk, and an RBI, and Shyanne Lundy, Kaylee Risser, Kourtney Zatsick, and Emily Joseph each scored twice.

Lundy and Risser both walked twice and each drove in a run, while Joseph was 1-for-2 with a walk and two RBIs. Zatsick went 1-for-2.

Perhaps the biggest news of the day for DCC was the return of Morgan Tyler to the circle for the first time since April 12.

Tyler, who had been out with an injury, got the win going two hitless innings walking one, and striking out six. Lydia Morgan pitched a scoreless inning striking out one.

It was more of the same in the second game, as DCC needed nine hits to score 16 runs taking advantage of nine walks, two hit batters, and an error by Sheffield.

Busatto had another big game going 2-for-2 with a triple, a double, a walk, two runs scored, and five RBIs.

Melia Mitskavich got the win not allowing a base runner in three innings of work while striking out seven.

SMETHPORT, Pa. – Emily Mourer tossed a two-hit shutout, and Elk County Catholic scored 10 runs in the top of the seventh to break open a fairly close game on its way to a 15-0 win at Smethport.

Mourer walked three and struck out 15 while also chipping in n offense going 1-for-2 with a double, three walks, and an RBI.

Danielle Nelson had both Smethport hits going 2-for-2.

Boyd got the win giving up three runs on six hits and a hit batter while striking out one.

The Golden Rams, one of the top Class 4A teams in the WPIAL with a 13-4-1 record, pounced early taking a 7-0 lead after three innings.

Also for Highlands, Joie Beacom went 2-for-3 with a walk and a run scored, Payton Smalley was 2-for-3 with two RBIs, and Jess Cekada scored twice.

Marra Patton was 2-for-3 with an RBI to lead Karns City, which lost for the first time since dropping a 15-5, five-inning decision to DuBois Central Catholic in the season opener March 27.

SPRING MILLS, Pa. – Scoring twice in the fifth and five times in the sixth, Penns Valley erased a 1-0 deficit on its way to a 7-1 win over visiting Brookville.

Brookville, which led 1-0 from the second inning into the fifth, was paced by Tory McKinney who was 2-for-2, while Mara Bowser went 2-for-3 with a run scored.

Allie O’Brien got the win going seven innings allowing an earned run on five hits and two walks while striking out 14.

MORRISDALE, Pa. – Hannah Betts went 2-for-4 with a triple, a double, three runs scored, and three RBIs to lead West Branch to a 13-1, six-inning win over visiting Curwensville

Joslynne Freyer led Curwensville going 2-fro-3 with a triple and an RBI, while Abby Pentz was 1-for-3 with a double and a run scored.

Nelson got the win going six innings allowing one earned run on five hits while striking out 11.