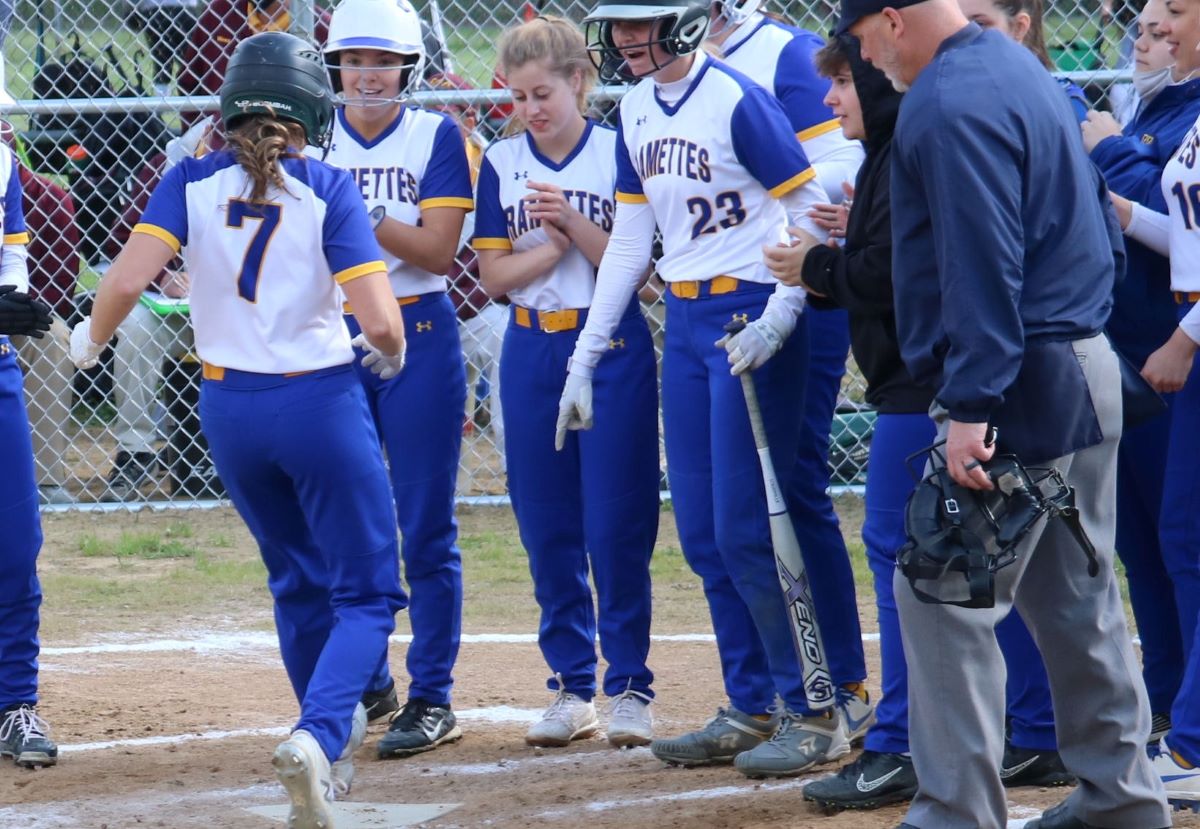 Julia Jones is greeted by teammates, including No. 23 Julie Peterson, as she crossed home after her fourth-inning home run Thursday. Photo by Bob Parana

The Ramettes were leading 3-2 going to the bottom of the fourth when Shelby Sorg reached on an error and Jenna Pavlock singled bringing up Jones, who hit a line-drive home run to center to make it 6-2.

That was part of a big offensive day for Jones, who was 3-for-4 with a triple, three runs scored, and four RBIs.

Pavlock went 2-for-4 with three runs scored, and Jenna Kasmierski drove in a pair of runs for Johnsonburg.

RIMERSBURG, Pa. – Down to its last out with no one on base, Forest Area erupted for six runs to rally past Union, 17-14.

The Lady Fires, who had already staved off the 10-run Mercy Rule in the fifth, found themselves trailing 13-11 going to the seventh inning.

Union then got the first two outs without an issue before Maggie Boehme singled and Madison McFarland walked.

The rally looked like it was over when Emily Aites hit a ground ball to third, but an error on the throw allowed Aites to reach safely and both Boehme and McFarland to score to tie the game.

Another error followed on a ball hit by Jessica Wagner, and then Nicole Meyers singled home Aites to give Forest Area its first since 3-0 in the first inning. Brenna Thompson then singled home two more runs, and another error allowed a 17th run to score.

Union, which was looking for the first win in the program’s three-year history, found itself up 10, 13-3, going to the fifth inning thanks in large part to a nine-run first.

The Golden Damsels needed just three outs to get the win via the 10-run Mercy Rule, but the wheels feel off almost immediately when Boehme walked and McFarland reached on an error.

After a strikeout, Wagner singled home Boehme to keep the game alive, and Thompson added a two-run double to cut the deficit to 13-6.

The Lady Fires kept coming in the sixth getting a two-run single by McFarland and then scoring two more runs when Wagner reached on an error to make it 13-10. A single by Meyers then made it 13-11 setting up the dramatic seventh inning.

It was the second time in three days Forest Area erupted with two outs in the seventh to win a game. The Lady Fires scored seven after two outs to stun Redbank Valley Tuesday.

Thompson drove in five runs on the day going 2-for-5 with a double and a run scored.

McFarland scored four times while going 2-for-4 with a double and two RBIs, while Boehme was 2-for-3 with two runs scored, and Kaleigh Capelle was 2-for-5 with two RBIs.

Rylie Colligan was 3-for-4 with two doubles, a run scored, and four RBIs for Union, while Georgia Palm went 3-for-5 with a run scored and an RBI.

Meyers got the win going seven innings allowing 14 runs, four earned, on 14 hits and four walks while striking out four.

HYDE, Pa. – Alaina Fedder and Olivia Bender both hit home runs to lead Clearfield to an 11-3 win over visiting Tyrone.

Fedder was 2-for-3 while adding a double, driving home a run, and scoring twice, while Bender went 2-for-4 with a run scored and two RBIs.

Hipps went the distance to get the victory allowing three earned runs on four hits while striking out 15.

PUNXSUTAWNEY, Pa. – Elliott Ferrent went 2-for-2 with a home run, a walk, a run scored, and five RBIs to help Punxsutawney to a 12-2, five-inning win over visiting Brookville.

Meholick went 3-for-4 with two RBIs and three runs scored, while Suplizio was 3-for-3 with two runs scored.

Makieya McGuire had the lone hit for Kane.

Leah Tigani took the loss giving up 15 runs, 10 earned, on 16 hits, three walks, and a hit batter in four innings in the circle.

Schultz went 3-for-4 with two runs scored and four RBIs.

Abby Rottman added a double and a triple and scored twice while going 2-for-4 for the Lady Warriors.

Kia Sage was 1-for-2 with a double and an RBI for Redbank Valley.

Courtney Stewart got the win going five innings allowing an unearned run on three hits and two walks while striking out nine.

SENECA, Pa. – Leah Exley threw a strong seven innings allowing one run on seven hits while striking out two to lead Keystone to an 11-1 win at Cranberry.

Exley also walked twice, scored a run, and had an RBI on offense for the Lady Panthers.

Natalie Bowser led Keystone’s offense going 3-for-3 with a double, a run scored, and five RBIs, while Alexandria Johnston was 2-for-4 with a triple, a walk, two runs scored, and two RBIs.
Rylee Coe went 2-for-3 for Cranberry.

Daniele Claycomb 2-for-3 with an RBI for Galeton.

West got the win going 5 ⅔ innings allowing one earned run on five hits and a walk while striking out 13.

BRADFORD, Pa. – Bradford scored 10 runs over the first three innings en route to its first victory of the season, a 14-4 triumph over Port Allegany.

Port took an early 2-0 lead in the top of the fourth, but the Owls scored four in the bottom of the frame and never looked back.

In addition, Carlie Perischini scored three runs, as seven different Bradford players tallied at least one hit and one RBI.

Marah Rush and Bree Garzel combined to allow seven earned runs on 12 hits, walking seven and striking out one.