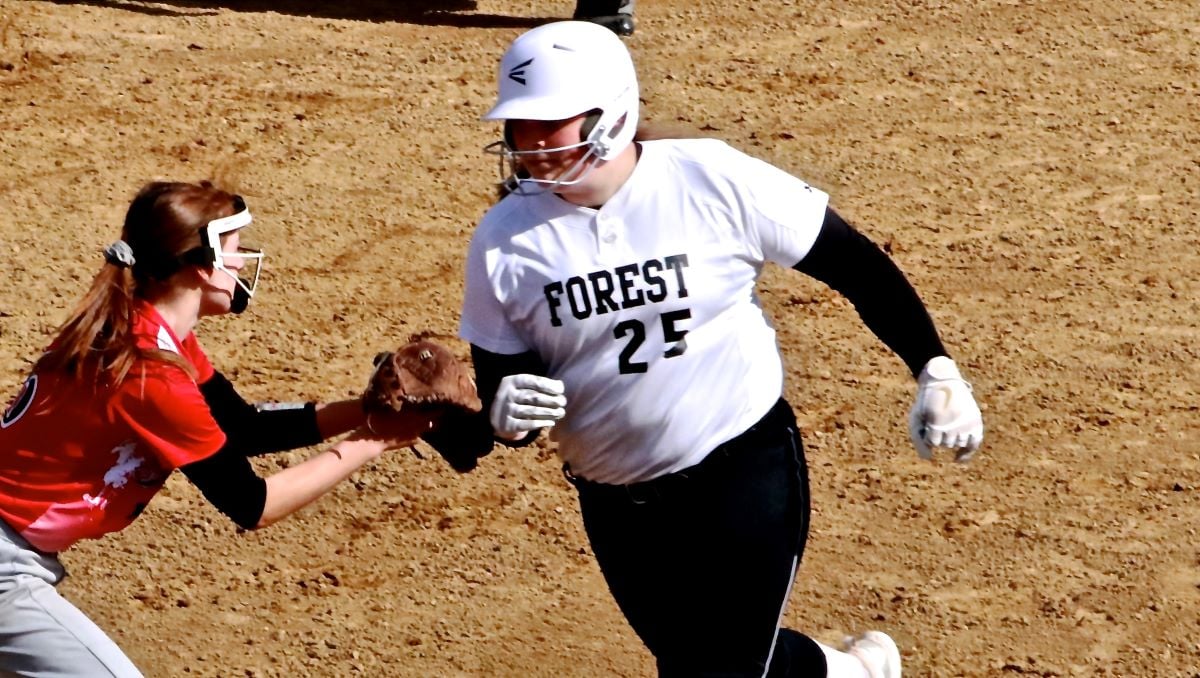 TIONESTA, Pa. – Forest Area had a productive Thursday afternoon, first beat Clarion-Limestone, 2-1, and then finishing off a nine-inning comeback win over Clarion, 6-5, on a walk-off base hit by Alexis Oswald.

Both games were at West Forest High School, and the victories moved the Fires to 11-2 on the season.

A strong circle performance from Izabelle Flick helped Forest Area to the 2-1 win over C-L.

Flick went seven innings allowing one earned run on five hits, a walk, and a hit batter while striking out five.

Frances Milliron was 1-for-3 with a double and a run scored for the Lady Lions with Alyssa Wiant picking up an RBI.

When play was halted in the third inning April 11, Forest Area was trailing Clarion 5-0.

But when play resumed Thursday, the Fires immediately scored twice in the bottom of the third and then tied the game with three runs in the fifth with back-to-back RBI doubles from Aites and Oswald scoring the final two runs of the innings

The game remained tied until the ninth when Emma McFarland led off the inning with a triple to left.

Clarion proceeded to intentionally walk Boehme and Madison McFarland before Payton Simko got Aites to pop up to first on the infield fly rule.

That brought up Oswald, who lined a hit to center scoring Emma McFarland with the game-inning run.

Flick pitched out of a two-out, bases-loaded jam in the top of the ninth to give her team a chance to win the game in the bottom of the ninth, as she got Noel Anthony to fly out to Emma McFarland in center.

Oswald went 3-for-5 with a double and three RBIs to lead the way on offense for Forest Area with Madison McFarland scoring three times while going 1-for-3 with the triple, two walks, an RBI, and three runs scored.

Emma McFarland was also 2-for-5 with two runs scored in the win, and Aites was 1-for-4 with the double and two RBIs.

BROOKVILLE, Pa. – Using a five-run second inning, Brockway held off Brookville for a 6-4 win at Blake Field at Northside Park.

Eliza Powell and Madalynne Heckman singled in runs and Zoe Moore doubled in another in the second inning. From there, the Lady Rovers stranded nine runners in scoring position as Lady Raiders reliever Alyssa Tollini threw a scoreless 5 2/3 innings, giving up four hits while walking just one.

Danielle Wood, Heckman and Lillian Heilbrun each had two hits

Lady Rovers starter Gabby Hertel scattered 10 hits and didn’t walk a batter while striking out one.

Aubre Eble hit an inside-the-park home run in the bottom of the first inning for the Lady Raiders. Tori McKinney doubled to start a three-run sixth inning. Kerstyn Davie singled in a run and Tollini singled in two runs to set the final score. Davie and Lexee Mays each had two hits.

A 10-run fourth inning was the catalyst for the Game One victory.

Winning pitcher Kalie Dixon also went 1-for-2 with a double, a walk, and an RBI, and Alana Benson walked twice and scored twice.

Baylee Brown had the lone hit for Port Allegany, a double.

In the second game, Bradford overcame a 5-0 deficit after a half inning in part by scoring seven runs in the fourth.

Oliva Angell paced the offense with three RBIs while going 2-fro-4 with a double and a run scored.

Tori Tanner went 2-for-3 with a triple, a run scored, and two RBIs for Port Allegany with Thea Petruzzi walking twice, scoring a run, and driving home a run. Kayleigh Dowells also had a triple and a run scored.

COUDERSPORT, Pa. – Otto-Eldred swept a doubleheader at Coudersport winning 11-3 and 10-0 in five innings.

Katie Sheeler had a big game on offense for the Lady Terrors going 3-for-5 with a triple, two doubles, an RBI, and two runs scored.

Jessi Hall also added a triple while going 2-for-3 with two walks, an RBI, and two runs scored, Kate Rhinehart walked three times while going 1-for-2 with an RBI and a run scored, and Suzie Rounsville walked once and scored twice.

Makenzie Gentzyel hit a home run for Coudersport while going 1-for-2 with a walk, a run scored, and two RBIs. Madyson Dubots-Angood was 2-for-4 with a run scored.

Bri Heller got the win going seven innings allowing three earned runs on seven hits and a walk while striking out 16.

In the nightcap, Abby Wolfe tossed a five-inning, two-hit shutout. She struck out six.

Heller doubled and homered to lead the O-E offense while going 2-for-3 with three runs scored and three RBIs.

Sheeler also had a double and was 2-for-2 with a walk, two RBIs, and three runs scored.

Sierra Myers and Gentzyel each had hits for Coudersport.

DUBOIS, Pa. – DuBois Central Catholic swept a doubleheader against Kane at Heindl Field in DuBois winning 22-0 in three innings and 16-1 in four innings.

The wins moved the Lady Cardinals to 15-1 on the season heading into their showdown 12-1 DuBois in the City Classic Saturday, which can be watched on D9and10Sports.com.

In the first game, DCC scored its 22 runs on just 14 hits taking advantage of eight walks and six Kane errors. The Lady Cards led 10-0 before Kane came to bat.

Kali Franklin led the way on offense going 3-for-4 with three runs scored, and two RBIs, while Savannah Morelli scored twice and had three RBIs.

Morgan Tyler threw a one-hitter to get the win. She also walked a batter and struck out four.

Hoyt got the win going three innings allowing an unearned run on three hits and a walk while striking out seven.

Lydia Morgan pitched a scoreless inning giving up a hit and striking out two.

Leah Tigani took the loss going 3 ⅔ innings allowing 16 runs, 11 earned, on 16 hits and five walks while striking out one.

Dani Nelson was 2-for-2 with two doubles, an RBI, and two runs scored for Johnsonburg.

Jones got the win going three innings allowing four runs, one earned, on four hits and a walk while striking out eight.

Ashley Day took the loss. She didn’t record an out allowing 13 runs, 11 earned, on seven hits and five walks.

MOUNT UNION, Pa. – Patyn Crisswell went 2-for-4 with a double and three RBIs to lead Mount Union to a 15-4, five-inning win over visiting Curwensville.

Brodbeck got the win going five innings allowing four runs, two earned, on six hits, a walk, and a hit batter while striking out five.

May 12, 2022 D9 Baseball: Kellert Helps Coudy Edge O-E; Pisarchik Comes Off Bench to go 4-4 for DCC; Tettis 5-in No-No for ECC
Two Meet Records Fall at Redbank Valley Invite Powered by Janney Montgomery Scott in Clarion
This website or its third-party tools process personal data.In case of sale of your personal information, you may opt out by using the link Do not sell my personal information.
×
Manage consent