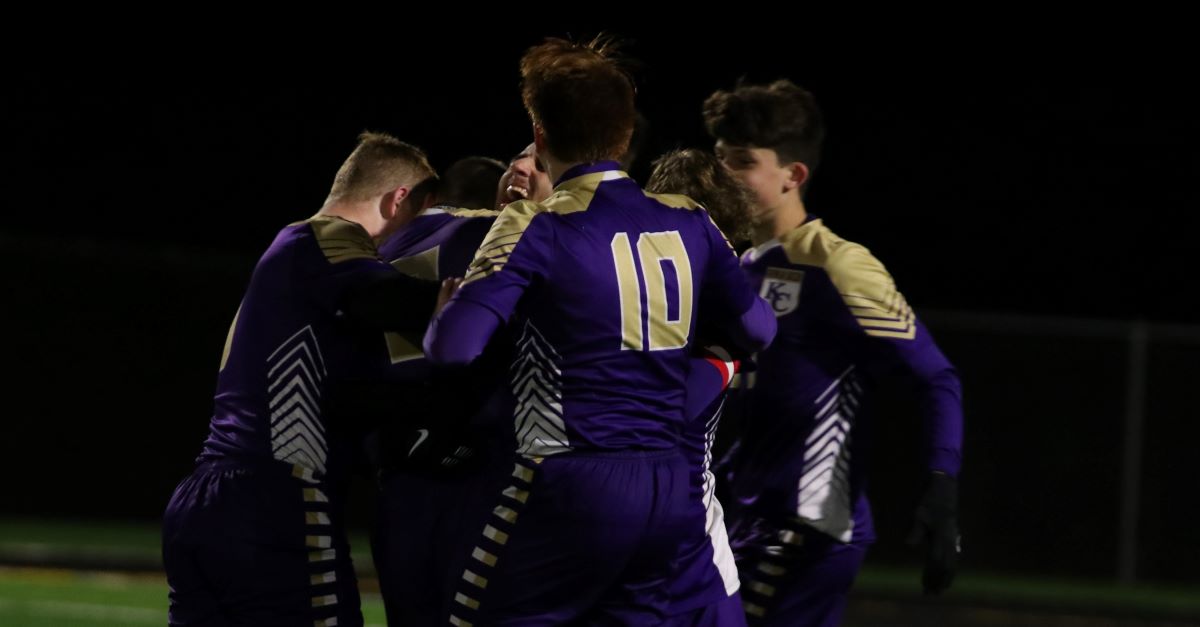 (Karns City celebrates at the end of the game after capturing the District 9 Class 2A title Photo by Jared Bakaysa of JB Graphics. See more of Bakaysa's work here

BROCKWAY, PA. – A Myles McCully goal in the 64th minute was enough for top-seeded Karns City to earn a hard-fought 1-0 victory over third-seeded Punxsutawney in the District 9 Class 2A title game at Brockway’s Varischetti Field Tuesday night.

The win helped Karns City avenge their 3-0 loss a year ago to Punxsutawney and snapped a three-year title game losing streak dating back to 2016 when they beat the Chucks, 6-1, for their third title in a row.

“They had their minds made up, they were going to (win) no matter what,” Karns City head coach Jim Grenninger said.

The McCully goal was assisted by Braeden Rodgers.

“I was very happy and excited,” McCully said.

Rodgers took the initial shot that Chucks’ goalkeeper Jacob Ebel mishandled, leading Rodgers to get his own rebound where he made a nice touch pass for McCully to finish the play.

“Kaden Schrerer got it to our midfielder, I played it to Owen, Owen Colwell played it to B-man, B-man got through the defense, he got taken out and Miles, here, he just put it away, put it past him,” Dakota King said of the goal. “He buried it.”

Punxsutawney was unable to make a comeback, as it was held to only two shots on goal in the second half.

The Gremlins continued to play with their foot on the gas as they got a pair of free kicks late in the game with King sailing one too high on net and Owen Collwell hitting the crossbar on an attempt with a minute left.

Mallick Metcalfe had a quiet day in net for Karns City as he stopped four shots to earn his ninth shutout of the season.

“We’ve given up eight goals all season,” Grenninger said. “I think we have the best defense in District 9.”

The first half was all Karns City as the Gremlins controlled the ball in the Chucks zone for most of the half generating eight shots on goal compared to the Chucks two shots.

“We had a few shake-ups because we were missing a couple of kids,” King said. “But our coaching staff, and our team, we had enough depth to get the job done.”

King was a threat for the Gremlins as he had four shots on goal but none that was able to get past Punxsutawney goalkeeper Ebel.

“We kept it tight in the back,” King said. “We got the ball to the midfield and they helped us spread the ball out to get us more shots on net.”

Watch the full interview with King and McCully.

Despite the loss, Ebel made 10 saves in net for the Chucks.

“He was outstanding tonight,” Grenninger said of Ebel’s play in net. “He’s a big difference that kept this game close.”

Photo by Jared Bakaysa. Click on the photo to view/purchase more of Bakaysa’s work

Elk County Catholic, Otto-Eldred Move Into D-9 Class 1A Volleyball Semifinals; Galeton to D4 1A Title Match
Clearfield Ends Karns City Reign in D9 Soccer; Lady Bison Capture 2A Title
We use cookies on our website to give you the most relevant experience by remembering your preferences and repeat visits. By clicking “Accept All”, you consent to the use of ALL the cookies. However, you may visit "Cookie Settings" to provide a controlled consent.
Cookie SettingsAccept All
Manage consent