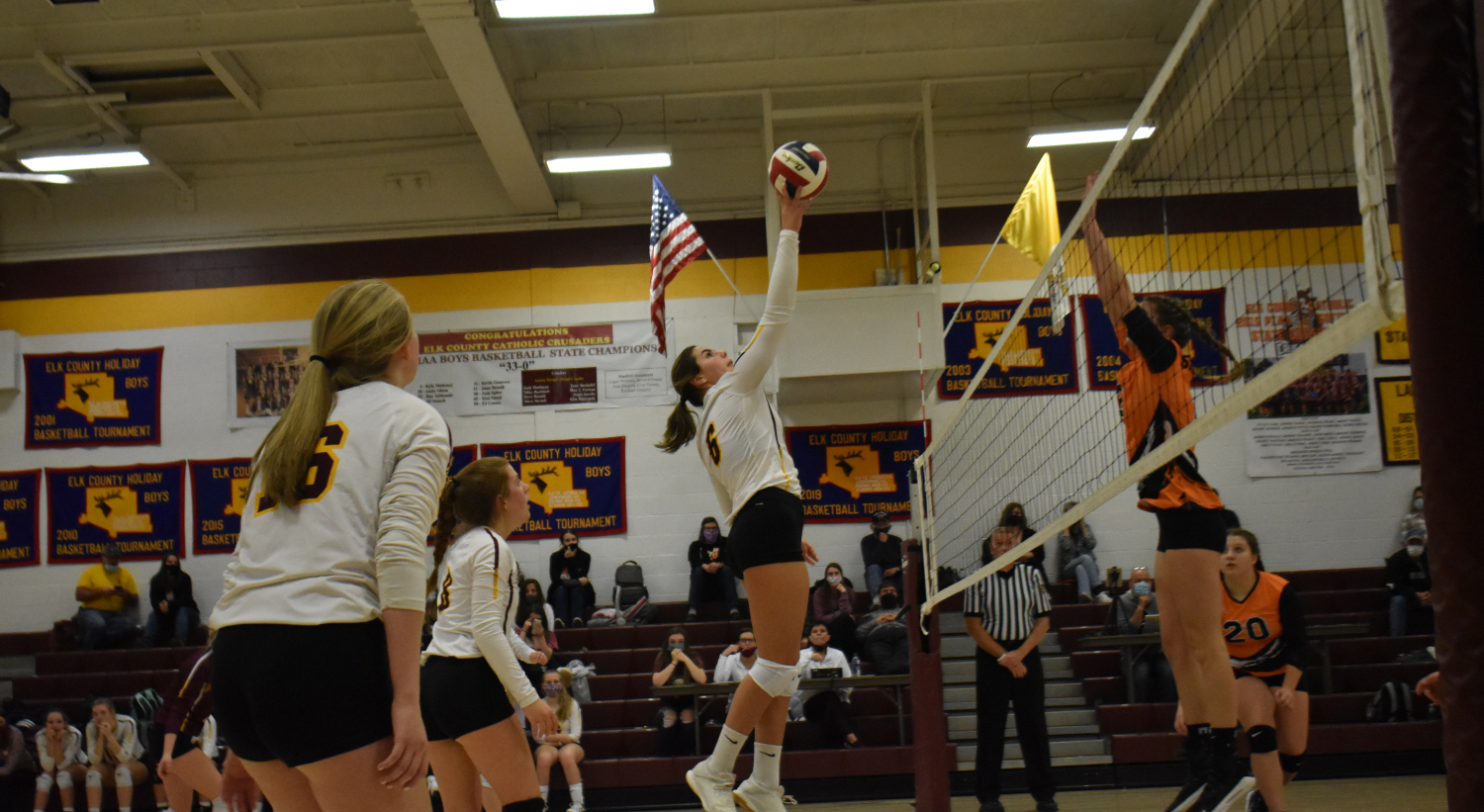 The Lady Crusaders didn’t trail in either of the first two games and just briefly in the third.

“Momentum is everything, especially in the playoffs when you’re already amped up,” said Elk County Catholic coach Kelsey Morey. “That first game was very important. I was very happy to see us start off well.”

ECC’s serving was terrific, allowing its offense to run effectively.

Rewatch the match via ECC TV

The Crusaders jumped out to a commanding 17-6 lead in the first game. Julia Aikens had a pair of aces in that run and Brooke Bauer and Gabby Weisner each had a kill.

“We have a habit of starting off slow and we weren’t able to recover,” said Sheffield coach Melissa Lemay.

Kassidy Orinko had a pair of kills for Sheffield as they tried to claw back in game one, but ECC’s margin was too much to overcome.

Game two was much tighter at the start. Brooke Bauer had an early kill for ECC, but an Orinko kill got Sheffield within one, 10-9.

A kill from Bauer started a 6-0 run for ECC, which gave them control.

“Our serving was huge tonight,” Morey said. “We only had three service errors all night. We’ve been going back and forth with that during the season, so I’m really happy with our serving and I think our passing was better, which was key to getting our offense running.”

Sheffield gained its first lead of the match, 5-3 in set three on kills from Emily Leichtenberger and Lynzie Grubbs, but it was short-lived.

ECC responded with an 8-0 run with kills from Gabby Weisner and Maddie Marzullo.

The lead for the Crusaders never got below five the rest of the way.

“We told the girls to play like you’ve been there,” Lemay said. “They’ve (ECC) been there. They know what these games mean. We prepared for them as best we could, we just didn’t play as well as we wanted to tonight for sure. Not taking anything away from them (ECC), they’re a great program.”

“Getting to the point where we got to, 13-3 in the regular season, and getting to the playoffs which hadn’t happened since 2014 is a great accomplishment,” Lemay said. “Winning a playoff game, which, I can’t remember how long it’s been. We went when I played, but we’re not going to say what year that was. I’m grateful.”

Elk County Catholic, the No. 3 seed, now gets No. 2 seed Otto-Eldred, a 3-1 winner over Cameron County, in the semifinals on Thursday.

Otto-Eldred will host Elk County Catholic in the semifinals at 6:30 p.m. Thursday, Nov. 5.

Alli Mackensky added seven kills, three blocks, one dig, and one ace for the Lady Tigers, who also got six kills, 28 digs, and two aces from Olivia Rohrbaugh.

Tressa Succowich played a solid all-around match with 24 digs, an ace, and two kills as did Lauren Sauley with 20 digs, 10 set assists, three kills, and an ace.

Galeton will take on Canton in the title game at 4:30 p.m. Thursday, Nov. 5, at Williamson High School.

(Chris Rossetti contributed to this story.)