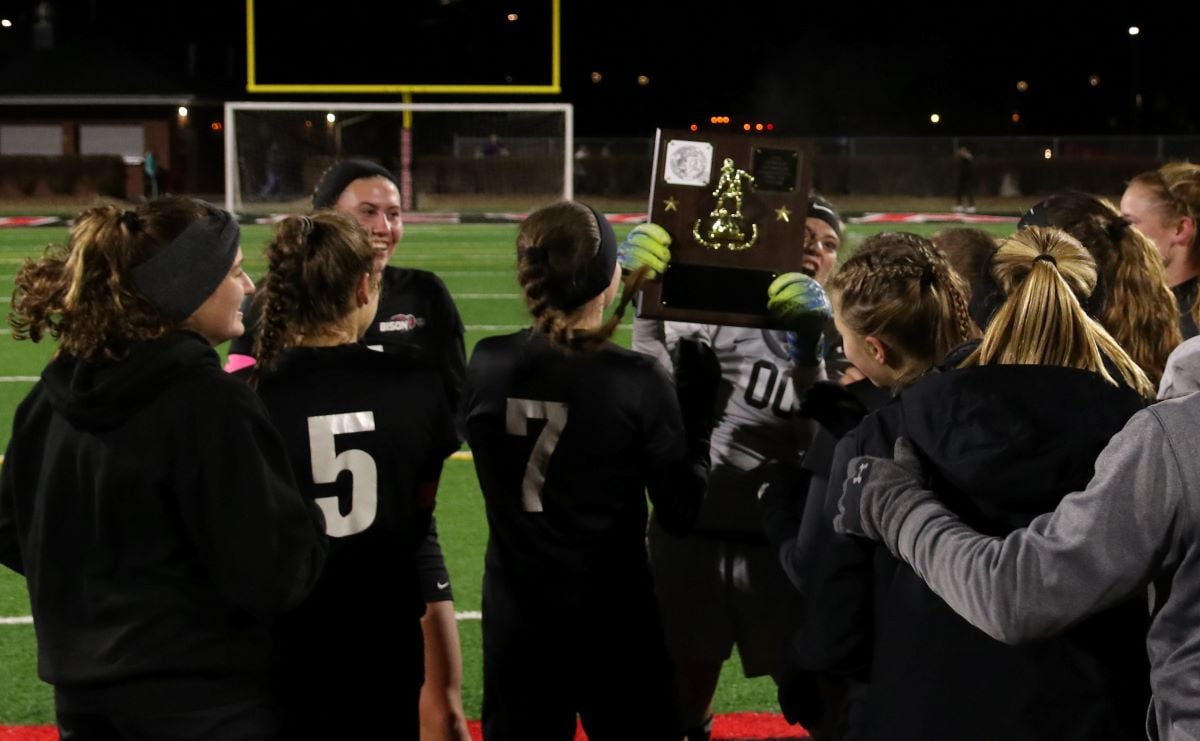 A pair of goals from Emma Hipps and a strong second half helped top-seeded Clearfield earn their first District 9 title since 2015 and end second-seeded Karns City’s eight-year title streak with a 5-4 victory in the Class 2A championship game Tuesday night in Brockway.

“(I’m) really excited,” Amanda Hazel, who scored the go-ahead goal for Clearfield in the 52nd minute said. “I don’t remember the last time they (Clearfield) won the district title. It’s really big for me, especially I’m a senior.”

Karns City came into the game having won four straight 2A titles after winning four in a row in Class 1A, and the Lady Gremlins had won District 9 title in 22 of the past 25 years.

“That was a heck of a game,” Clearfield head coach Todd Winters said.

No lead was safe as the game saw three ties and two lead changes.

The final tie came at 3-all early in the second half after a goal by Karns City’s McKenna Martin, who beat a pair of Lady Bison defense on a long pass before beating Clearfield keeper Cayleigh Walker.

Things broke Clearfield’s way in the 52nd minute when the Lady Bison’s lone senior, Amanda Hazel, scored on a header to give Clearfield a 4-3 lead.

She took a perfectly placed corner kick from Riley Ryen on the right side to head it in to the left of Karns City keeper Rossi McMillen.

“Headers from the corner is my thing,” Hazel said. “I was waiting for it, and Riley (Ryen) gave a beautiful serve. I saw it coming right to me, and I hit it right in.”

Three minutes, the Lady Bison extended their lead to 5-3 when Elle Smith ripped a shot past McMillen from the top of the box.

Karns City didn’t go away quietly get a goal from Emma Dailey to cut the deficit to 5-4 with 23 minutes left in the game.

The Clearfield defense, though, stepped up and held the Lady Gremlins to only one shot on goal following the Dailey goal.

The game was tied at two at halftime.

The Lady Bison struck first with Hipps finding the back of the net at the six-minute mark to set the tone with a 1-0 lead.

Dailey responded in the 24th minute tying the game with a shot from the left side after receiving a nice feeder pass from Martin in the middle.

Four minutes later, Martin snuck past the Lady Bison defense on a long pass to beat goalkeeper Walker giving the Lady Gremlins a 2-1 advantage, their only lead of the game.

Clearfield took advantage of a costly turnover just outside the box in Karns City territory in the 33rd minute, and Hipps was able to walk in for a chip in breakaway goal to tie the game at two.

The second half saw a completely different Clearfield team.

The Lady Bison held Karns City to only three shots on goal in the second half after allowing nine shots in the first half.

“We made an adjustment during halftime,” Winters said. “We made sure our backs were in their position and we made sure we had more pressure and cover on defense.”

Less than a minute into the half, an uncovered Ryen gave Clearfield a 3-2 lead after she found a loose ball that was hit back and forth between a group of Karns City defenders on a scramble to get the ball out of the zone.

“It was really big,” Hazel said. “It really got us up. It got us more hyped, and kept us together.”

Winter said the first goal of the second half was immeasurable.

“That was really big,” Winters said. “That’s momentum. It got our girls fired up. If (Karns City) would’ve scored, it would’ve been hard to come back.”

Martin got Karns City even with her goal just a couple of minutes later, but that was the last time the game was tied.

Walker finished the night with nine saves for Clearfield, while McMillen made six stops in net for Karns City.

Photo by Jared Bakaysa. Click on the photo to see/purchase more of Bakaysa’s work

Karns City Back on Top in District 9 Class 2A Boys’ Soccer
Clearfield’s Rhine Wins Gc Town Properties Volleyball Performance of the Week Voting
This website or its third-party tools process personal data.In case of sale of your personal information, you may opt out by using the link Do not sell my personal information.
×
Manage consent