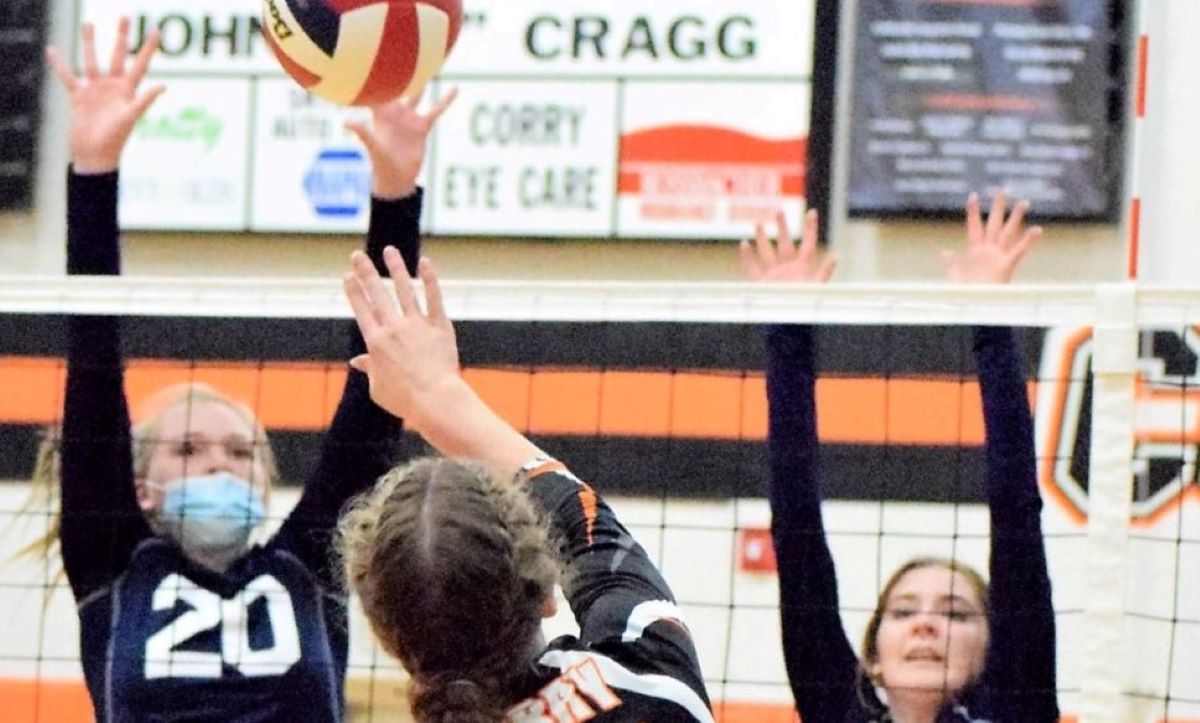 Kylie Fehlman (No. 20 pictured with Ellee Irwin earlier in the season) had 11 kills for Warren in their D10 quarterfinal victory over Meadville. Photo by Jeff Parkin

Madigan had 18 kills and 12 digs while also adding an ace.

Kylie Fehlman also reached double digits in kills for the Dragons with 11 and added three blocks, while Carly Beers had 10 kills.

Ella Stewart had a team-best 17 kills to go with four digs and an ace for Meadville with Kendall Sandrock and Emma Parks each adding six kills. Sandrock had four digs and Parks three.

Kendall Mealy paced the defense for the Bulldogs with 18 digs, while Kai Kawata had 10 digs.

Elliott Schleicher ran the offense for Meadville with 35 set assists while adding 10 digs.

Warren will face top-seeded Villa Maria in the semifinals at a time, date, and place to be announced.

“Grove City is a very solid team with many weapons that hustles well,” Fort LeBoeuf head coach LeAnn Byer said. “We knew we had to control the serve and serve receive game. We were able to control the game from the service line, which also enabled us to find more success offensively.”

Lauren Dahn and Chloe Rossi each added seven kills in the win for the Bison with Rossi leading the defense with 11 digs and Dahn right behind her for 10 digs. Katie Proctor also chipped in with six digs.

Kerringten Wasiulewski ran the offense for Fort LeBoeuf with 30 set assists and helped out on defense with seven digs.

The Bison will face second-seeded Conneaut in the semifinals at a date, time, and place to be announced.