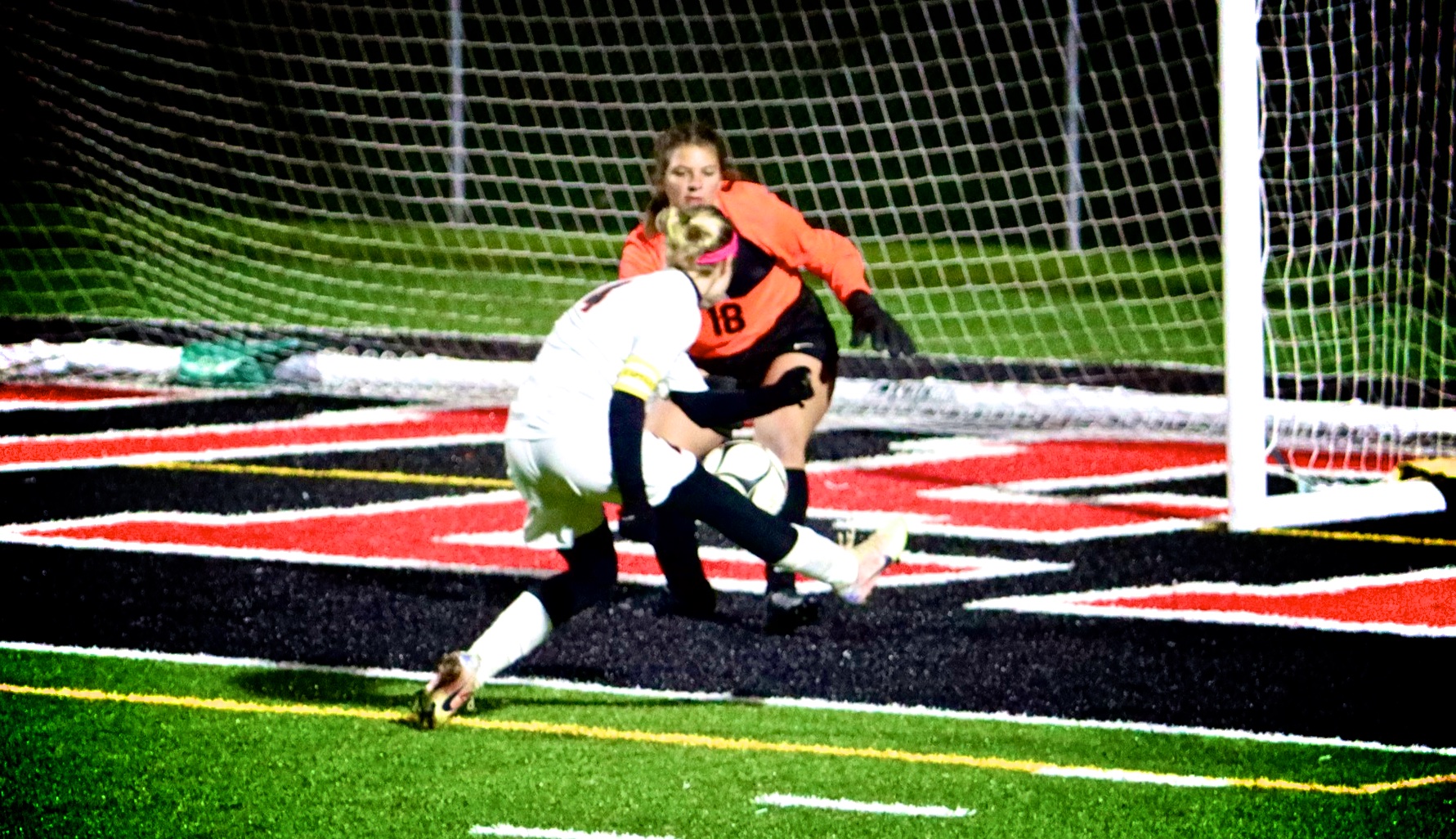 BROCKWAY, Pa. – The Brockway Lady Rovers had to get past a talented Clarion squad to get a chance at the District 9 title that narrowly alluded them a season ago.

They did just that, as Danielle Wood scored a pair of first-half goals to help the Lady Rovers to a 4-1 victory in the District 9 Class 1A semifinals at Frank Varischetti Field.

With the win, Brockway advanced to play Elk County Catholic, a 1-0 winner over Forest Area on Wednesday, for the championship.

“It was really important (for us to get off to a good start,” Wood said. “If we didn’t, we didn’t know how the game would go, so I’m glad we did.”

Brockway got off to a quick start, as Wood scored on a feed from Amanda Decker with 33:31 to go in the opening half.

In the meantime, the Brockway defense, led by keeper Josie Orinko, thwarted Clarion twice in the first 10 minutes on penalty kicks.

The first Clarion attempt went high and the second was stopped on a sliding effort from Orinko.

That helped set the tone for the Rovers, who took a 2-0 lead on Wood’s second goal on a feed from Madalynne Heckman with 9:14 to go in the first,

That 2-0 lead quickly became 4-0 early in the second half, as Bailey Allison and Decker scored four minutes apart, the second of which came with 29:26 remaining.

Evelyn Lerch was able to break through midway through the second half for the Lady Bobcats, scoring to make it 4-1.

The Brockway defense made sure that was it, however.

Now, they will get that chance at the D9 title they came oh so close to capturing a year ago, falling to Redbank Valley in a shootout in the title match.

BROCKWAY, Pa. – Brockway has been in plenty of big games in recent years, and in Thursday’s District 9 Class 1A semifinal game against Kane, that showed once again.

Leading 1-0 at halftime, the Rovers scored three times in the second half and played their usual stifling defense to thwart the Wolves.

In the process they advanced to play Elk County Catholic, where they will be in search of their fifth consecutive D9 crown.

“It feels amazing, just to keep it going,” said one of those star defenders, Eric Young. “We’re going for our fifth one in a row and I’m happy to be a part of it.”

Young, Joe Hertal, Mayson Freemer and keeper Jacob Maze were a big part of that defensive group that kept a potent Kane attack off the scoreboard.

The game was a bit of a feeling-out process, with Brockway maintaining possession through much of the firs half but unable to break through.

With 8:07 to go in the first half, they were able to get on the board, as Marcus Bennett played a perfect pass to Nolan Swanson who did the rest, burying the ball past Kane keeper Owen Hillard for a 1-0 advantage

Hillard made a number of key stops for the Wolves, but the game opened up for the Brockway offense in the second half.

The Rovers scored twice in the span of less than two minutes, as Dylan Bash scored on a feed from Noah Adams and Dylan Antonuccio added the third goal with 19:13 to go.

Swanson put the finishing touches on the brilliant second-half performance from the Rovers with 14:06 to go. Evan Botright also added an assist for Brockway.

They will get the chance to make it a whole handful of D9 titles in a row against the No. 7 seed Elk County Catholic Crusaders, who beat Coudersport 2-1.

The game will be at DuBois on Tuesday at a site and time to be determined.

In doing so, they continued their Cinderella run through the D9 playoffs, which will culminate in a battle with Brockway for the championship.

Jacob Hootfallen, who had the game-winner for Coudy in a quarterfinal win over Port Allegany, converted on a penalty kick with under 10 minutes to play, but ECC was able to prevent the equalizer.