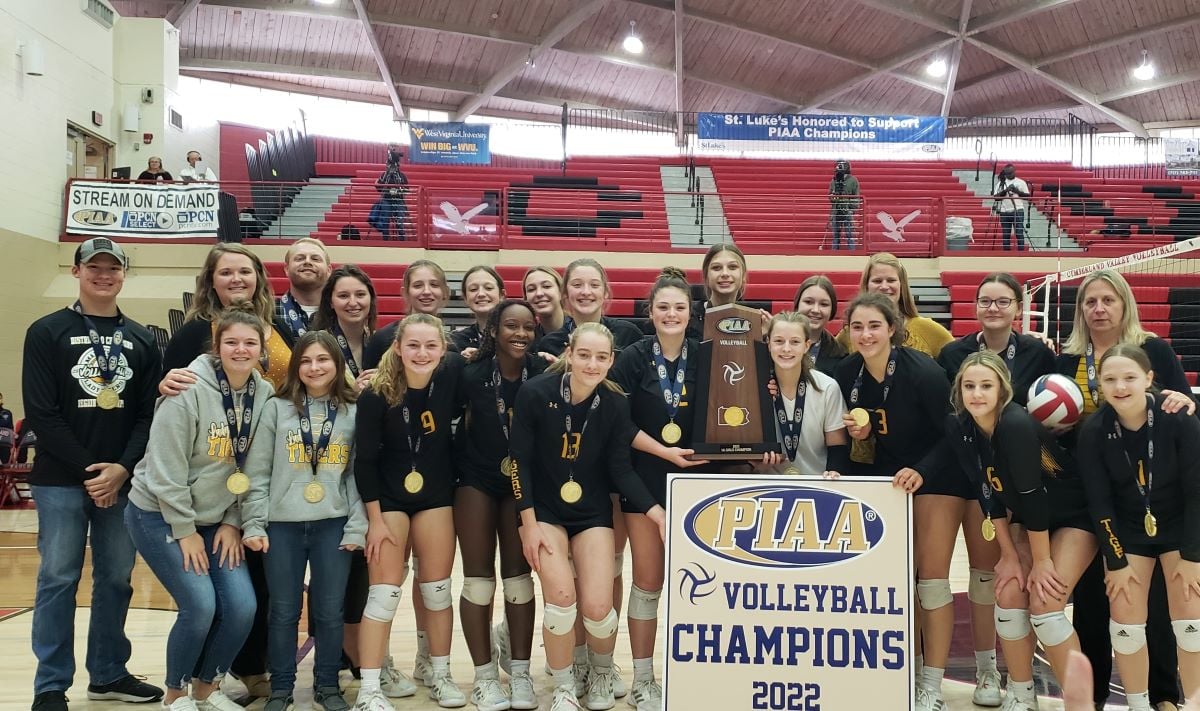 “Amazing, unreal, it is all we ever wanted, it is what we worked so hard for,” senior Libero McKenna Crawford said.

Just like the semifinal match against Oswayo Valley, it may have been a sweep but it wasn’t easy for Maplewood (22-1), which won its sixth state title and its first since 2017.

The D10 champion Tigers found themselves playing from behind in each of the first two sets only to rally to win both of them.

But Maplewood turned to its start outside hitter, Sadie Thomas, when things were tough and Thomas delivered.

Two straight kills from the senior made it 22-21, and then a hitting error by West Branch’s Matayha tied things up at 22.

“Great players step up when it matters the most,” Maplewood head coach Sheila Bancroft said. “We have always wanted that from Saide, and I think it took her until her senior year to finally finish in a big-time atmosphere, to say, I want the ball. You could see that in her the whole match. She wanted the ball, and when she can finish it and we can give it to her, that is the name of our game. We have been doing it all year. We weren’t going to change it.”

Thomas finished the match with a match-high 19 kills, including eight in the first set.

“It feels unreal,” Thomas said. “It kind of feels like it didn’t happen because it has been so fat. It is definitely something that has been very exciting and something I will look back at.”

After the Thomas kills, Bailey Varndell, much more on her soon, then served an ace to put the Tigers ahead 23-22.

After a kill by Katrina Cowder tied the match at 23, Thomas delivered a kill to put Maplewood at set point.

Cowder again tied the match at 24, but a kill by Madison O’Hara was followed by an error by the Warriors giving the set to Maplewood.

The second set looked like it was going to go the way of West Branch when the Warriors jumped out to a 15-9 lead.

But then Varndell, we told you we would come back to her, had the serving run of her life when it mattered the most.

The senior setter served nine straight points as Maplewood went on an epic 10-0 run after trailing 17-14 to take full control of the second set.

That serving included three straight aces from Varndell, who had five aces in the set and nine in the match.

“It is just focus,” Varndell said. “You always want to go back there and serve an ace. This is my last game ever of volleyball. If it is not the time to do it now, when is it? I just really wanted to get an ace and score points for myself.”

Varndell’s serving helped turn the deficit into a 24-17 lead that put the Tigers on the verge of a two-set-to-none lead, something they did when Megan Woge put the ball away following a 4-0 spurt by West Branch.

“(The thought) is don’t give up anymore,” Thomas said about her team rallying. “Just keep working, keep talking, don’t let it get us down. We wanted to try to find the momentum swing we always need. We did, and we pulled back each time.”

After back-to-back rallies, Maplewood left little to chance in the third set jumping out to a 19-6 lead on its way to the state title.

“I asked them before going out for the third game, could you please play from ahead this time,” Bancroft said. “When the third set comes around, that is the hardest set to win when you are up two games to none. There is a lot of volleyball to play. I asked them, please don’t look at the scoreboard. I will let you know when the game is over, just focus one point at a time and get a lot of momentum. You can get a lot of momentum in this set, and they will start to feel it.”

The title came on a kill by Elizabeth Hunter that set off a dogpile celebration for the Tigers.

In addition to the 19 kills from Thomas, Hunter added eight kills with Woge chipping in three.

Thomas also served three aces and added eight digs and three blocks, while Varndell had 11 digs and 28 set assists. Crawford had a team-best 14 digs, and Woge and Hunter each added two blocks.

“They were focused,” Bancroft said. “It is just a special group, and they are a close-knit group. They don’t give you any problems. And the parents are amazing. The community around them is amazing. It takes a whole community to win. Without the spectator bus and all those people traveling seven, eight hours in the snow yesterday to get here, we may not win this. It is huge.”

The title is Bancroft’s fifth as the Maplewood girls’ coach – she also won one as the boys’ coach at the school – in her 35th year of coaching.

“They are all special,” Bancroft said. “Every one of them has a different meaning. These girls were just very resilient. This group of seniors, I can’t emphasize enough, they just brought everyone else around them into that team unity and made this team a good team.”

Cowder paced West Branch, which was playing in the state title game for the first time, with 11 kills and two aces, Kerin added six kills and Makiya Mack had two kills and two blocks.

“West Branch is a very good team,” Bancroft said. “They had some good hitters out there, and they kept us on our heels most of the match. But, we were able to turn it around at the right time.”

McLaughlin, Wagner Help Lead Reynolds to Third Straight District 10 Class 1A Title
District 10 Chapter of PVCA Announces All-District Class 1A, 2A, 3A, 4A All-Star Teams
This website or its third-party tools process personal data.In case of sale of your personal information, you may opt out by using the link Do not sell my personal information.
×
Manage consent