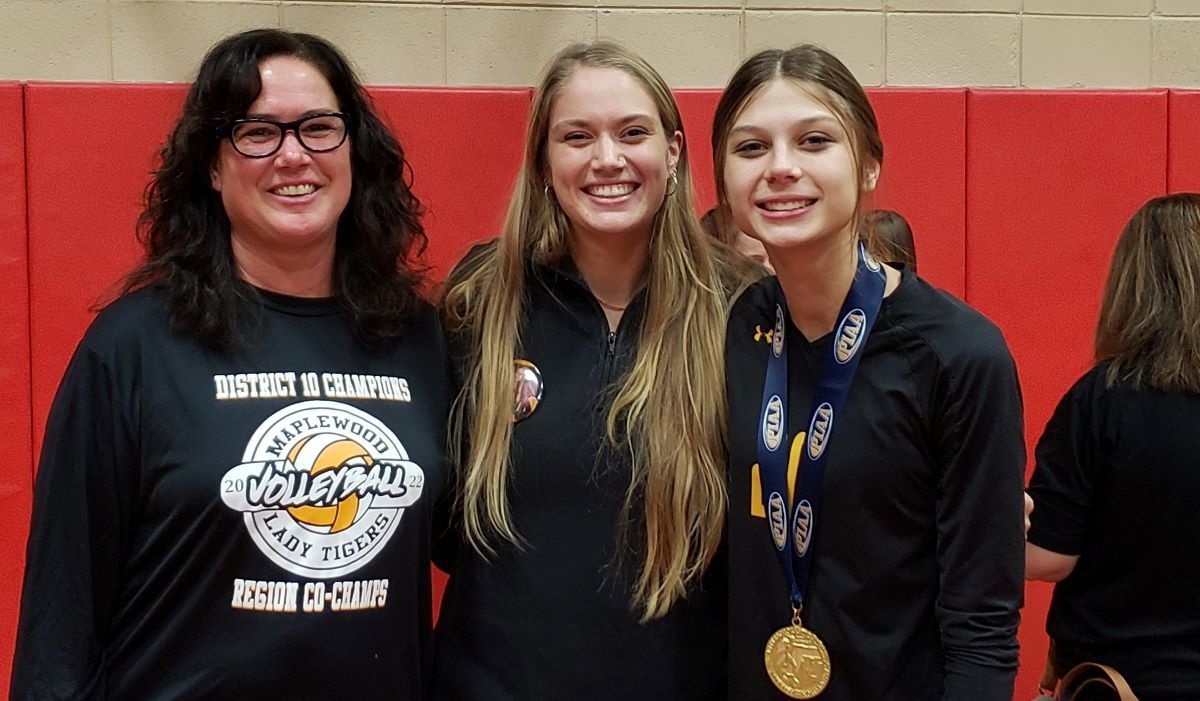 The Hunter family may be the first family of Maplewood volleyball now that (from left) mom Susan (Jones) in 1985 and daughters Maggie (2017) and Elizabeth (2022) have won PIAA titles. Photo by Chris Rossetti

Winning state championships in volleyball, that is.

When Maplewood won the PIAA Class 1A title Saturday morning with a 3-0 win over West Branch at Cumberland Valley High School, many of the players had been there before. But not for themselves, but for family members.

Heck, for Hunter, it truly is a family thing.

Not only is she a champion. So is her older sister, Maggie (a senior on the 2017 title team) and her mom Susan (maiden name Jones), who was a member of the school’s first-ever champion team in 1985.

“All season, we have kind of had that in the back of our heads,” Elizabeth Hunter said. “We thought it would be crazy if my mom, my sister, and I won states. Now, it is a dream come true.”

Hunter played a key role in the victory with eight kills and two blocks, including the championship-winning kill.

While the Hunters have spanned the entire two generations of champions at Maplewood, the legacies of the Thomases, Crawfords, Varndells and O’Hara are also strong.

Thomas, who had 19 kills Saturday, said being surrounded by champions helped forge another title.

“It raises you,” Thomas said. “You want to achieve it, and you see what work needs to be done. Being surrounded by it shows you how much work and dedication it takes.”

“We have always had it in the back of our minds,” Crawford said. “But it was a matter of bringing it to reality.”

Bailey Varndell credited Bancroft – the love and affection the entire community has for their 35th-year head mentor were seen when they were chanting “Sheila, Sheila” as she walked into the auxiliary gym for interviews and pictures after the match Saturday – for the Tigers’ success.

“Having Sheila as a head coach is amazing,” Bailey Varndell said. “She has been to nine of these things, I think, and has won five girls and one boys championship.”

For her part, Bancroft understands that while the program has been uber-successful with six titles now (five with Bancroft as head coach), each group is different.

“I have been here,” Bancroft said. I have the experience. But I have to feed that experience to them because these girls have never played in that kind of atmosphere. We had to prepare them mentality.”

General McLane Falls to Central Columbia in PIAA Girls’ Soccer Class 2A Title Game
McLaughlin, Wagner Help Lead Reynolds to Third Straight District 10 Class 1A Title
This website or its third-party tools process personal data.In case of sale of your personal information, you may opt out by using the link Do not sell my personal information.
×
Manage consent