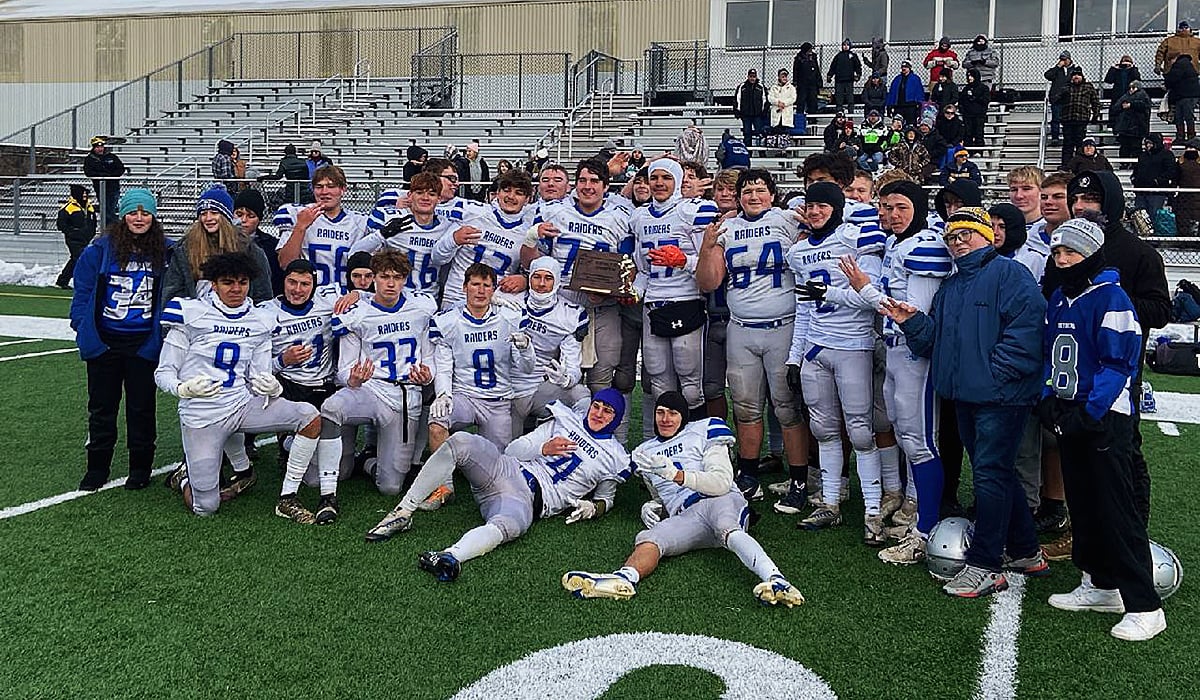 TITUSVILLE, Pa. – In a pair of critical moments, Haydin McLaughlin came up with a play defensively, and Jalen Wagner turned it into points offensively as Reynolds battled its way to a 28-14 win over Eisenhower for its third straight District 10 Class 1A championship.

With time running out in the first half and Eisenhower leading 14-6, the Knights had a 3rd-and-16 from their own 10. Shawn Pascuzzi tried to hit Garrett Jensen on a corner route. Pascuzzi’s pass was a bit high, and McLaughlin was able to get over the top of Jensen for an interception.

Wagner took the handoff on the next play, found the edge, and raced down the sideline for a 39-yard touchdown. Brayden McCloskey bulled his way in for the conversion to tie it at 14-14.

“That was a huge change of momentum, especially going right into the half,” McLaughlin said. I knew they were passing third and long. I just saw the ball go up, but I knew I was coming down with it.”

“It was absolutely huge,” Reynolds coach Josh Mull said. “And when we went into halftime, that’s exactly what we talked about. I said that’s the way we have to go out and play, we have to play with that kind of aggression.”

Then, in the third quarter, the Knights had taken the ball to the Raiders’ 20 but were facing a 4th-and-12. Pascuzzi rolled to his right and threw a jump ball toward Kris Bunk. McLaughlin broke up the pass to force the turnover on downs.

The ensuing Reynolds possession bled into the fourth quarter. On the first play of the quarter, Wagner got to the sideline and outran the defense for a 57-yard touchdown to give Reynolds its first lead of the game.

“We came into the game knowing there’s going to be a tough, tough fight and we came out and executed,” Wagner said.

McLaughlin put the finishing touches on the win by capping a 97-yard drive with a 31-yard touchdown reception on a fourth-down flea flicker.

“The flicker it’s it’s been our biggest play of the year because they’re always keying on Wagner,” McLaughlin said.

Wagner was able to help the Raiders get out of the shadow of their own end zone, and chew more than seven minutes off the clock thanks to strong running off left tackle.

“I was just seeing the linebacker he was like the only one that could have tackled me out there and whether he was going outside or inside I was just kind of doing the opposite of what he was doing,” Wagner said.

“We haven’t really had many drives like that this year,” Mull added. “To be honest with you, we had a couple last week against Maplewood. We had several against Sharpsville. But other than that this was the first time that we were put to put to the test. I was proud of the way our boys executed.”

Neither team was able to get much going offensively to start the game as they played to a scoreless first quarter.

“They had a great game plan, and we struggled till we figured out exactly how we needed to attack it,” Mull said. “And then when we figured it out, it blew things up a little bit, made things a little bit easier for us.”

Tucker Lindell opened the scoring on the second play of the second quarter with a 13-yard run to give Eisenhower a 7-0 lead.

A 33-yard Wagner run set up Reynolds’ first touchdown. Wagner’s run got the ball down to the two, and Brayden McCloskey punched it in from there.

Eisenhower wasted little time responding as Benji Bauer raced 65 yards on the first play from scrimmage of the ensuing possession to give the Knights the 14-6 advantage.

Wagner had 36 carries for 259 yards and two touchdowns. McCloskey was 4-7 for 88 yards and a TD. McLaughlin had all four catches.

Reynolds will move on to the PIAA quarterfinals and a matchup with District 9 champion Port Allegany at a date, time, and location to be announced.

“I’ve never seen them play. I’m excited to see them play, let’s get after it,” Mull said.

Maplewood Volleyball, It’s a Family Thing
Farrell Overcomes Adversity to Claim Second Consecutive D10 Class 2A Championship
This website or its third-party tools process personal data.In case of sale of your personal information, you may opt out by using the link Do not sell my personal information.
×
Manage consent